We’ve always wondered whether it’s possible to calculate the position of a dropped or thrown object. While we could certainly investigate this matter by rigorous experimentation, we don’t have to. Galileo already did.

After verifying that objects fall at the same rate no matter their size or mass, Galileo designed an experiment to measure the position of a falling object as a function of time to calculate the speed, and thereby determine whether the constant acceleration he hypothesized was correct. This was hard in his day: he had no reliable clock, no gadgets, nothing.

Not only that, but objects in free fall are innately hard to time because the of the acceleration: it’s all over so quickly. The initial speed of an object in free fall is always zero, but the final speed is super hard to measure. Galileo got around this by slowing the acceleration with a ramp.

He made a grooved, smoothed, wooden track and marked distances on it. He kept the angle of incline of the ramp small so the times and distances would be easier to measure accurately. Then he rolled a lead ball down it, over and over. And over. The more data collected, the better the accuracy of the results, and accuracy is precisely what Galileo was going for.

His clock was a water clock, meaning the amount of water leaking from a container with a hole in it corresponded to the total time. Ingenious.

Here’s what he found: the distance fallen down the incline was proportional to the time squared. When he rolled the ball down only a quarter of the incline, it would take half the time as rolling down the entire incline. This means the ball rolls the last

of the incline in the same amount of time as the first quarter. The velocity increased uniformly and predictably from a constant acceleration.

The distance fallen (or rolled down an incline) consistently corresponded to

. The acceleration rate a changed with the angle of incline, but Galileo postulated that at a 90° angle, or free fall, the acceleration of gravity is a constant

. He had to postulate it because, again, free fall times were difficult for him to measure accurately.

Galileo was exactly right, though: the acceleration of gravity on planet Earth is indeed

. We use g instead of a because g is a constant rather than a variable like a. Additionally, we can relate the acceleration of a ball down an incline with a = g sin θ, which is what Galileo did too.

A 10 second fall necessitate dropping from a height of

. That’s 1700 feet! Definitely not practical for Galileo in the days before skyscrapers and airplanes.

And how long does it take for something to fall from about the height of a grown man? If we drop an egg from a height of 2 m, since we’re into SI units these days, it takes all of

Earlier, we said that Galileo wanted to determine speed too, not just distance. Using Δv = aΔt, he substituted in

More generally than free fall, if an object is thrown upward or downward, its distance (or any other variable) may be calculated from

, where the initial velocity isn’t zero like it is for free fall. If it’s positive, it’s an upward vertical throw. If it’s negative, then it’s a forceful throw downward, rather than a drop.

In either case, we need to use acceleration as negative

because: vectors. If each component isn’t in the same direction, the sign really, really matters. It’s the difference between mathematical life or death.

Here’s all the falling equations falling in one place:

Wait a second—what happened to d? Oh, it’s been replaced by x. No biggie. Either is fine, but x is more standard in projectile motion, for whatever reason. Note that when xi and vi are zero, then we’ve got free fall. Also note that while this is true for any constant acceleration, if we’re calculating anything about falling on Earth, then that acceleration is

Just for giggles, let’s calculate the velocity of that egg just before it hits the ground from a 2 m drop. We need the equation vf2 = vi2 + 2aΔx for that, and since it’s free fall, vi = 0. The other variables are

. That’s 14 mph: that egg should wear a seat belt. Note that we take the negative of the possible roots because we need a negative (downward) velocity.

. This final speed didn’t change much but with a larger one, we’d really see a difference.

Projectile motion is different than free fall: it involves two dimensions instead of one. Now that we’ve mastered free fall and one-dimensional throws, we’re ready for the major leagues. That’s right. Baseball.

Balls traveling in two dimensions, only one of which experiences acceleration, require two sets of equations: one set for the x-direction and the other for the y-direction. The equations we’ve used before are still true, but to be more precise (and who doesn’t love precision) we label the parts of the vectors as vx and vy and the distance x and y. The acceleration of gravity only applies to what we conventionally call the y-direction.

Yes, it’s time for trigonometry. At last. Physics would be nothing without algebra, geometry, trigonometry, calculus, differential equations…Suffice it to say, math and physics are tight. In the case of vectors, we use trigonometry to separate the x-component from the y-component, or combine both components into the total by finding the hypotenuse.

Generally speaking, questions of this type include the angle from the horizontal, in which case vy = v sin θ and vx = v cos θ. Or whatever the vector happens to be: distance, acceleration, any vector at all.

Since we have an itch to play baseball mathematically, here’s the diagram. Projectile motion is awash with diagrams. 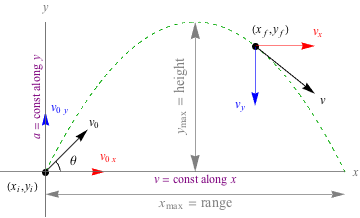 From this diagram, we can deduce several things. First, the only acceleration present is that due to gravity, so we’re free to use the equations we used in free fall in the y-direction. Gravity changes the velocity in the y-direction only (vy), and leaves vx alone, which is constant throughout the object’s journey with

. The acceleration in the y-direction gives the projectile’s path through space a parabolic shape, due to

Secondly, the initial velocity v must be broken down into x- and y-components with respect to the angle θ like we talked about previously. Thirdly, when the object reaches maximum height, half the trip has been completed in terms of time,

if the total time for the flight is t.

The equations we used in free fall plus the definitions of velocity and acceleration may now appear something like this:

Let’s play ball. In warm-ups, we toss a baseball back and forth with velocity v. At its maximum height, what is the ball’s velocity? Believe it or not, we have all we need to answer this question, without even busting out a single equation.

We already stated that velocity in the x-direction doesn’t change under projectile motion. What about in the y-direction? When the ball is at maximum height it’s not going any higher up, nor is it falling downward. So, at that moment, when the direction is changing, the velocity vy must equal zero. Therefore, the total velocity at maximum height is vx.

Now, it’s time for batting practice. We hit the ball with velocity v= 123 mph at an angle of 30° to the ground. How far does it travel in the x-direction, i.e. what is the cannonball’s range? Other than necessarily converting 123 miles per hour into 55.0 meters per second, we also need to convert the velocity into its horizontal and vertical components. That’s vy = 55 sin 30, so

To find the time, we turn our attention to the y-direction because the ball hits the ground as determined by the acceleration of gravity, which operates in the y-direction only.We can set the origin of the launch at (xi, yi) = (0, 0).We could set it elsewhere, but then we’d be masochists. (You can try it in your spare time).

If we use the equation

, we should be able to isolate time. The positions yi and yf are both zero, where the ground is. Technically, we could say that baseballs are hit about a meter from the ground but trust us, 0 is close enough for our purposes right now. We like solving linear equations more than quadratic ones, unless except for the masochistic among us as previously noted.

The zeroes in position condense our equation to

, which means one t cancels out on each side. Phew! Plugging in the constant acceleration due to gravity,

, and the initial velocity in the y-direction

we can solve for time

At long last, we return back to our x equation,

that it started with, but now 30° below horizontal.

The signs are so, so important. One negative flipped to positive, and it’s all over for a sensible answer. Likewise, life depends on keeping track of the vectors and their components.

Here’s something to chew on: if a gun is fired horizontally, and at the same time a bullet is dropped from the same height as the bullet that has been shot, they both hit the ground at precisely the same time. Good old constant acceleration of gravity. Unless, of course, either bullet hits something, in which case it’s a redo.