Forces and Motion - Test Your Knowledge

1. What type of motion is

? Detail as much as possible.

2. What is the total displacement for the sum of 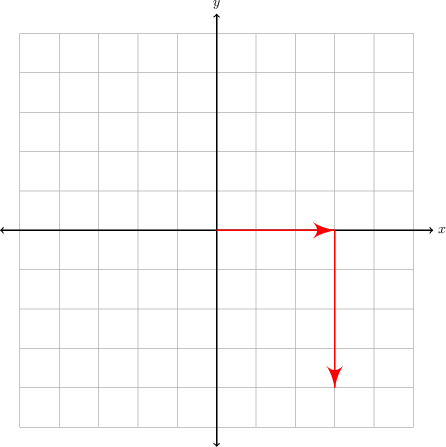 3. A bicycle decreases speed from

to rest in 5 seconds. What’s its acceleration?

4. Under what conditions could acceleration be a positive number while an object decelerates?

5. What’s the sum of two velocity vectors, one of has a magnitude of

in the positive y-direction, and the other pointing the opposite direction with a magnitude of

1. Answer: It’s a velocity, as determinable from the units. The magnitude (speed) is

in the negative x-direction.

pointing 53° down from the x-axis. We find the total distance from the Pythagorean Theorem and recognize a 3-4-5 triangle with 32 + 42 = 52, so the length or magnitude of the vector is 5 cm, while the direction we find from

. We need both magnitude and direction together to describe a direction. A picture works, too. 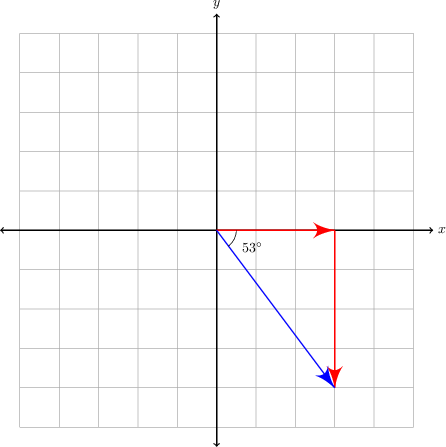 3. Answer: While we can’t determine direction, we can tell the magnitude of acceleration is

. The negative sign and units are essential: -0.6 is a meaningless number and lost without them.

4. Answer: If the motion occurs in the negative direction, then positive acceleration would be deceleration because it's pointing away from the motion.

in the negative y-direction, or

1. How far does an object travel in 3 seconds of free fall, measured in feet?

2. A 4 meter long ramp inclined at 10° from the horizontal has a grooved track on it for a ball, just as Galileo used. How long does it take for the ball to roll down the ramp starting at rest from the top?

3. A golfer drives the ball some 300 horizontal yards in 6 seconds. At what time is the velocity smallest and what is it?

4. A golfer drives the ball with an initial velocity of

at an angle of 43° above horizontal. What is the final velocity in the y-direction, just before it hits the ground?

5. A golfer drives the ball with an initial velocity of

at an angle of 42° above horizontal. How high does it travel before turning around?

1. Answer: Finding the answer in SI units first is the way to go, because we know the acceleration of gravity in those units but not those of feet. Using

. Solving for t, we first arrive at

. See how those units cancel out and second move to the numerator? Units are a physicist’s best friend. Lastly, we take the square root for t = 2.2 s.

3. Answer: At time 3 seconds, the ball is at the peak of its motion, with no velocity in the y-direction in the moment of between rising up and falling down. The x-velocity, on the other hand, is constant, and therefore isn’t less at any particular time than another. Since we’re given the time the ball travels a constant horizontal speed over a horizontal distance, we can calculate that speed

4. Answer: It’s really too bad we’re not asked for the final composite velocity, because it would be the same

but with a -43° angle. That’s how parabolas work: at the same vertical distance of 0 m the velocity is the same numeric value, as verified by the equation vfy2 = viy2 + 2aΔy. When Δy = 0, then vf2 = vi2. That’s not true for the x-direction alone because Δx isn’t 0.

What we really need to know for our problem is the initial velocity in the y-direction alone, vyi,and we’ll have it from vyi = 56 sin 43, or

. Since the ball flips direction when as it returns to the ground, the final velocity

5. Answer: Let’s make a picture to visualize the problem and its components. If anyone asks, we like drawing. 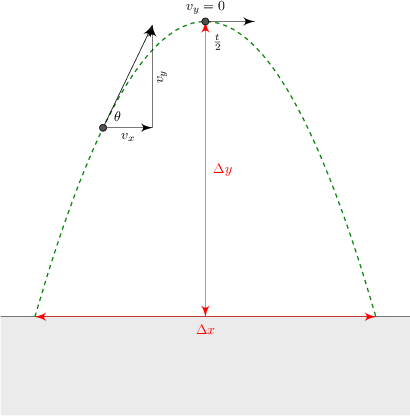 We only care about the y-direction in this problem to find Δy, when the acceleration of gravity brings the final velocity to 0 before turning around. We find the x- and y-components of velocity to be 56 cos 43 and 56 sin 43 respectively, so

. We don’t need vx to answer this question, though we would if we needed the horizontal range.

because it’s in the opposite direction from initial velocity.

1. What is the reaction force of a hand pulling on a string?

2. An object rests on a bookcase. It’s probably a book. Anyways, if the normal force acting on this book is 10 N, what’s the mass of the book?

3. A skateboarder skids to a stop in 2 seconds. His original velocity was

. What’s the magnitude of the decelerating force if the skateboarder plus board are 65 kg?

4. Complete a free-body diagram for a tug-of-war rope in use, stationary.

5. What’s the sum of the forces for a combination of

1. Answer: The string pulling the hand. Newton’s Third Law flips the two actors around for the reaction.

2. Answer: We can draw a FBD to identify forces and how they relate to each other.

The diagram informs us that N = W because

and F = ma. Either by subbing the former into the latter, or by finding acceleration numerically before sticking it into the force equation we find that F = -97.5 N. It’s negative if we call the direction of motion positive, anyway. Since we were asked for only magnitude and not direction, the positive value will do.

5. Answer: Yes, this is more of vector practice than force practice, but it’s good practice so we can’t complain. We must add the x- and y-direction forces separately, for a net of

. Using the Pythagorean Theorem, the magnitude is

Force of Gravity and Orbital Motion

2. What’s the orbital velocity for the configuration in #1?

4. A battery-powered toy car travels 5 cm per second. When fastened to a 1 m string with the end tacked to the floor, what’s the centripetal force on the 250 g car?

5. Draw a free-body diagram for planet Shmoop during a moment in time of its orbit around the star Educatia. Label the force, acceleration, and velocity vectors. Also label any forces on Educatia.

, we arrive at r = 8,167 m. Well, we do if we are careful with the scientific notation. No, this doesn’t model any real configuration in outer space.

for orbital motion, and therefore that

. It doesn’t matter which of the masses we choose, though normally we’d choose the smaller of the two as the orbiting body. In reality, the motion of the larger body may also change and we’d have to consider the center of mass, which we’re not going to do right now, because we haven’t learned how just yet.

What we are going to do is calculate

. Then we take the square root to find

, we had better find ourselves the speed from the orbital period. We can do that from logic alone to find

We’re all set to find the acceleration now with

. Going around in circles makes us dizzy because of forces on our brains! It makes sense now. 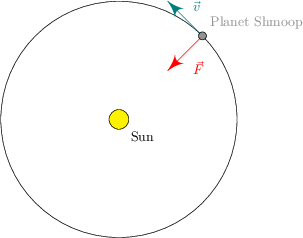 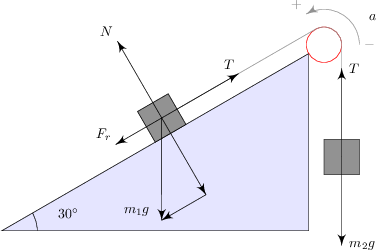 Please refer to the diagram above for Questions 1 – 5.

1. What is the sum of the forces for this system of weights if neither block is moving, with a = 0?

2. How would one calculate the friction in this diagram if a = 0?

5. How do the force equations change if acceleration is positive? Write each of them.

2. Answer: The friction is static friction, present when forces are insufficient to get an object moving, and calculable by Ff = μsN. Since N = m1g cos 30, we may add that Ff = μsm1g cos 30.