A doorknob is on the opposite side of a door as the hinges. Any wrench worthy of the name must be a few inches long. The place you push with your thumb on a pair of nail clippers is not directly above the jaws. Doc Brown put the flux capacitor of his time traveling DeLorean several feet from the wheels.

None of these are exactly accidents. (Well, okay, maybe that last one.) Doorknobs, wrenches, even nail clippers: they're all methods of applying a force at a point other than where you turn the nob, grab the wrench, or pinch the clippers. This idea—force applied at a distance—is called torque.

Torque shows up in many different forms throughout many fields of physics. Imagine a mobile hanging from the ceiling, with one large weight and two small weights: 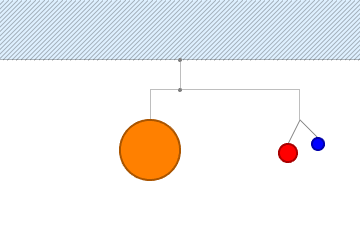 You'd think, given the large weight on the left and the small weights on the right, the mobile would rotate—pivot counterclockwise, dragged down by the heavy weight. But in fact, the mobile is perfectly balanced. That's torque—even a small force (such as the weight of a light mobile component) can cancel out a large force given a large enough lever arm to act over. For a mobile, the lever arm each weight acts over is literally an arm; for a wrench, it's the length of the handle; for a doorknob, the width of the door.

Torques will always try to rotate objects, the same way a force will try to translate an object. In the mobile example, the force of gravity on each hanging weight tries to pull the mobile down to the ground, but each force is canceled by an equal and opposite reaction force at the attachment point to the ceiling. 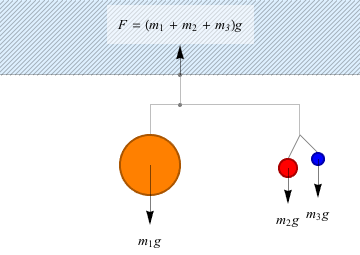 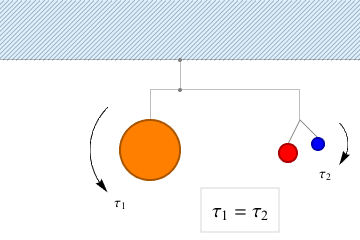 When both forces and torques are balanced, an object cannot move. This is called static equilibrium, and is the goal of every architect and bridge builder on the planet.

If you have any doubts about the magic of small forces overcoming large obstacles—we know, it's a downright Disney movie script—try opening a door. No, really. Push open a door using the doorknob, the heavier the door the better (don't pull or else the next step won't make much sense). We'll wait.

Done? Okay, now try it again. This time, unlatch the door, but don't push it open with the doorknob. Instead, put your hand near the hinges and push the door open. It's okay, we'll wait again. We brought some magazines.

Much harder the second time, right? That's because even though you're applying the same force, the longer lever arm you get by pushing on the knob instead of near the hinge greatly increase the torque on the door, making it easier to swing open.

We capture this by defining a torque as the perpendicular product of force and distance. In other words, for a force F applied a distance r away from the rotation point of an object, the torque (τ) created is: 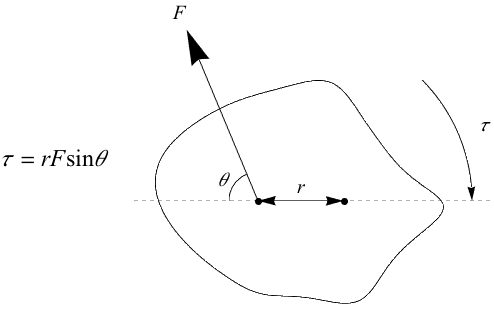 . Any other angle decreases the sinθ term and so decreases τ.

Occasionally objects can have what's called a "pure torque" applied to them: a torque apparently without any associated force. This phantom torque can generally be attributed to one of two things: a) Gozer the Gozerian, or b) a pair of equal and opposite forces called a couple (sometimes referred to as a moment).

In a couple, the two forces are equal in magnitude and point in opposite directions, effectively canceling each other out. But they're applied to different points on an object, and so can still create a net torque. Imagine one person pulling down on the left side of a plane propeller and another person pushing up on the right side: 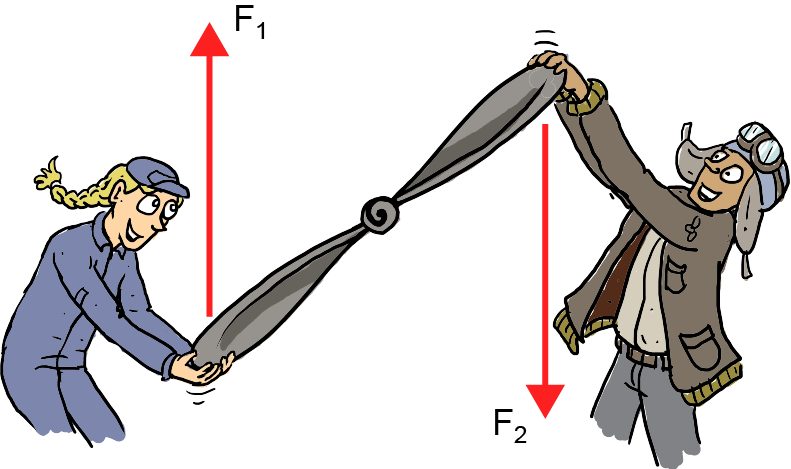 F1 = F2 (action/reaction and all that), but both forces want to turn the propeller counterclockwise, creating a net torque despite the absence of a net force: τ = r(F1 + F2).

Essentially F = ma says that the larger the mass of an object m, the more force F you need to accelerate it at the same rate a. Rotationally, the same thing holds—except when we're talking about rotation, we don't use a. We use α. Newton's Second Law for rotation states that the harder an object is to turn, the more torque is needed to accelerate it at the same angular rate. Or, if you prefer your analogies to be neat and tidy:

I is the rotating object's moment of inertia, or its resistance to rotation—exactly as mass, m, is a measure of an objects resistance to translational motion. Two points science.

One of the most impressive uses of torque and Archimedes' law of the lever is the trebuchet, a medieval siege weapon with a very heavy weight (big F) at the short end of a lever. The weight creates a massive torque when it's released, whipping the lever around with a large angular acceleration—which is made even larger by the long end of the lever holding the projectile, and larger still by the whipping action of the sling. What better way to try to crush an orc?

* Technically, 1 N · m = 1 kg · m2/s2 = 1 J. We tend to keep this hush-hush and keep on referring to energy in J and torque in N · m. Remember this unit coincidence when we get to the section on rotational work, however.

Previous Next
More on Rotation Navigation