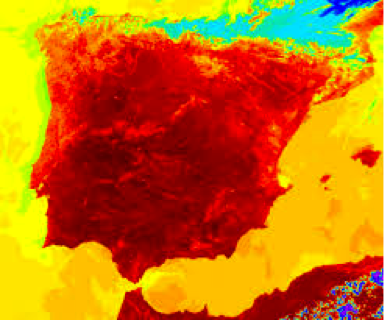 Whether we're sitting by the pool or on a sandy beach in warm and sunny Spain, we complain about the heat, the high temperature. In pool-talk, heat and temperature may be the same thing, but in physics-talk, they're not. We come in thinking we have a pretty good idea of what heat and temperature are and then—BAM!—we don't.

But worry not, it is just a small matter of reprogramming our minds. Okay, that sounds creepy. Really, it is a matter of spending just a little bit of time re-learning how to use the terms "temperature" and "heat."

Temperature is a measure of how fast the molecules within an object are moving. In fancier physics language, temperature is the average kinetic energy of the atoms that make up a substance, which we also call the internal energy of the system. It measures how fast, on average, a molecule in a substance is moving.

And what about heat? We're not talking about the poem here.

Adding heat is adding energy. To make something cold warmer, we have to get those atoms moving. To get atoms to pick up the pace, they need an energy increase. The more energy they have, the more they jiggle and move about. Kind of like our kid brother on a sugar high.

This shared energy that is getting objects to equilibrium is called heat, Q. Why Q? No idea, but H is overrated.

Temperature is the internal energy of an object, like the ice cube or the table. Heat is the energy that is transferred from the warm table to the cold ice cube. End of re-programming.

To increase the temperature of anything by 5 degrees Celsius, we need to add a certain amount of heat. This depends on the mass, m, in grams, of the object and its specific heat capacity, c.

If we're looking to heat up our favorite piggy bank, then the bigger the piggy bank, the more atoms there are and the more energy or heat required to get all those atoms wiggling at a higher speed.

Every object has its own specific heat capacity, c, a measure of how easy or difficult it is to heat up or cool down the object. To change the temperature of a piece of glass that weighs 5 g by 5 degrees Celsius, we'd have to add 20 J of energy. To heat a 5 g piece of ourselves by the same amount, we'd have to add 87 J. Why is that? Because we're not made of glass—although our winter heating costs would be quite a bit lower if we were. 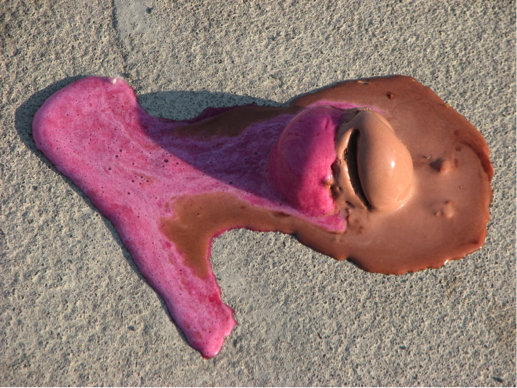 Uh-oh. An undesired phase change if we ever saw one.

Recipes often tell us to bring the water to a vigorous boil. We assume it's because the water is hotter when it boils vigorously than when it boils gently. To get water boiling vigorously we have to leave it on the stove longer and clearly add more heat. There's an issue, though.

When a material changes phase it does not change temperature, even when heat is put into the system. The law of Q = mcΔT breaks down and doesn't apply (hopefully you've been hoarding canned food and boiled water for just such an occasion).

As an ice cube melts, we can continue adding heat until the dinosaurs come home, but the temperature of the ice itself remains at the same. It's not until all of the ice melts that the extra heat begins to raise the temperature of the cold water left in its place. The same is true for boiling water. Boiling water, whether it's boiling gently or vigorously, is 100 °C. Once all of the water evaporates, the steam increases in temperature as we add more heat.

Remember the units! This is true for all of thermodynamics. The constants for latent heat have units and we have to plug those units in along with numbers accordingly. Specific heat, c, for example, is in