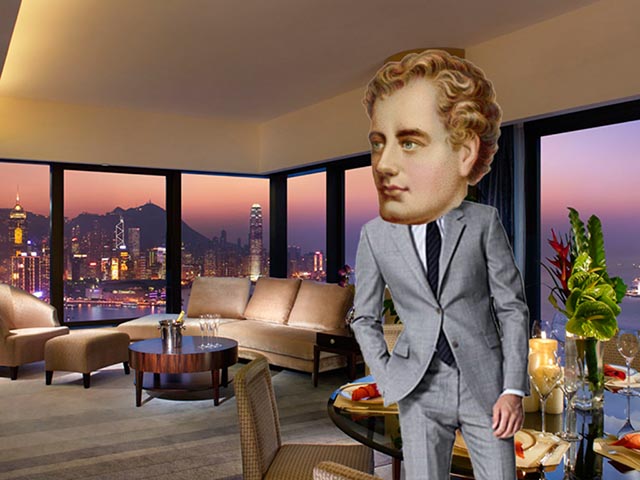 If Lord George Gordon Byron were alive today, he would be photographed getting out of limos and locking lips with the hottest young women - and men. In his life Lord Byron lived large and wild, cultivating a reputation as "Mad, bad and dangerous to know," as one of his many lovers put it. He was famous for his devastating good looks and his scandalous personal life - oh yeah, and for his writing. As the author of poems like Childe Harold's Pilgrimage, The Corsair and Don Juan, Byron was famous in his lifetime as a poet of tremendous talent and lyricism.

Lord Byron was a man of serious contradictions. In public he was determined not to take himself seriously, yet he slept with loaded pistols by his bed. He gorged himself on pleasures and grew disillusioned with all life by his 23rd birthday. He cycled through friends and lovers, tiring of them quickly and pining desperately for those he couldn't have. He lived everywhere and yet was at home nowhere. Do you see how this might a tortured artist make? His was a short, tumultuous and daring life, but his legacy lives on in some of the most beautiful poems in the English language.

Byron's birthplace at 16 Holles Street, London is now occupied by a branch of the English department store John Lewis.

When he arrived at Cambridge in 1805, Byron insisted that his college dorm room be outfitted with glasses, decanters and four bottles each of wine, port, sherry and claret. He also brought his pet bulldog.

Byron's guests at Newstead Abbey were offered drinks in goblets he'd had made out of skulls from the Byron family crypt.

Byron's hedonistic lifestyle in Europe was not without consequences. By the time he was 21, he suffered from raging cases of gonorrhea and syphilis.

Byron was bisexual and had male and female lovers. He thought that men were smarter but women kissed better.

Think your ex is psycho? When Byron broke up with Lady Caroline Lamb, she staged a sort of pagan ritual in which hired young girls danced around a fire burning Byron's effigy, letters and gifts. (Fortunately, she didn't go through with it.)

Byron always traveled with a bevy of animals. When he visited Byron in Venice, Percy Shelley recorded: "Lord B's establishment consists, besides servants, of ten horses, eight enormous dogs, three monkeys, five cats, an eagle, a crow and a falcon; and all these, except the horses, walk about the house which every now and then resounds with their unarbitrated quarrels as if they were masters of it. ... later I find that my enumeration of the animals in this Circean palace was defective, I have just met on the grand staircase five peacocks, two guinea hens and an Egyptian crane."

Augusta Ada Byron King, Byron's only legitimate child, gained fame of her own as a mathematician who worked on one of the earliest precursors to the computer.

During his summer with the Shelleys in 1816, Byron suggested the group pass a rainy afternoon by writing ghost stories. It turned out to be a momentous contest in the history of horror. Mary Shelley wrote the story that became Frankenstein, and Byron's doctor John William Polidori wrote "The Vampyre," the story that has inspired vampire depictions from Dracula to Twilight.

A publisher accused of pirating Byron's Cain and Don Juan argued that the poems were so scandalous that they did not deserve the word "copyright."

Lord George Gordon Byron, Childe Harold's Pilgrimage (1812)
This semi-autobiographical epic made Lord Byron famous. Written during his two-year post-college tour of Cambridge, the poem is about a disillusioned young man who has had his fill of pleasures (sound familiar?). It was the first of his works to feature the Byronic hero prototype that appears in his later poems. It clearly shows its author as a poet of serious talent.

Lord George Gordon Byron, The Collected Works
Many of Byron's best-known poems are his short works. Whether it's a love poem like "She Walks in Beauty" or a contemplative piece like "On This Day I Complete My Thirty-Sixth Year," Byron demonstrates his gift for exquisitely beautiful lyrics. Grab any edition of his collected works and get acquainted with this poet.

Lord George Gordon Byron, Don Juan (1824)
Many poets have tackled the Spanish legend of the lover Don Juan, but Byron's telling is among the best. Who knows - perhaps he felt an affinity with the much-misunderstood nobleman who couldn't take things seriously or keep his pants on. Byron began this poem in 1819 and was still working on it at the time of his death in 1824.

Edna O'Brien, Byron in Love (2009)
Forget Byron's poems - Edna O'Brien wrote an entire biography just about Byron's love life. Since Byron seems to have courted, slept with or impregnated just about everyone with a pulse, this makes for good reading. It is a fascinating glimpse into the poet's twisted personal life.

Edward John Trelawny, Recollections of the Last Days of Shelley and Byron (1858)
The adventurer E. J. Trelawny befriended Byron and Shelley a few years before Shelley died. He wrote two different memoirs of his times with the poets. There is some dispute over the accuracy of his accounts, given that he wrote the memoirs several decades after the events took place. Also, Shelley comes out looking a lot better than Lord Byron, whom Trelawny disliked.

Ian Gilmour, The Making of the Poets: Byron and Shelley in Their Time (2003)
Lord Byron and Percy Bysshe Shelley were the twin stars of English Romanticism. Though Byron's fame overshadowed Shelley's during their lifetimes, today scholars examine the two poets side by side. Both were major contributors to English poetry.

Virgil Thomson, Lord Byron
This opera is based on the tumultuous life of Lord Byron. It begins at his death and flashes back through his years of fame and infamy. If anyone lived a life worthy of operatic theatrics, it was Byron.

Raffaello de Banfield, "Una Lettera d'Amore a Lord Byron"
Byron's poems have inspired many musical compositions. "Lord Byron's Love Letter" is a musical interpretation of one of the many, many love letters Byron wrote to his many, many lovers.

Richard Arnell, Lord Byron
The English composer Richard Arnell wrote symphony in 1952. It is a musical portrait of Lord Byron, a symphonic expression of his biography.

Mozart, Don Giovanni
About fifty years before Byron began working on his poem Don Juan, Wolfgang Amadeus Mozart composed an opera based on the same Spanish legend. Listen to Don Giovanni while you're reading Don Juan.

Lloyd United, Lord Byron
Lloyd United is a quasi-Celtic ukulele band. Read that sentence one more time to make sure you understand its awesomeness, and then listen to their album Lord Byron.

Lord Byron
An 1813 portrait of the 25-year-old poet by Richard Westall.

Byron the Hottie
A portrait of the notoriously good-looking Byron by Thomas Phillips.

Lord Byron in Albanian Dress
An 1835 portrait of the poet by Thomas Phillips.

Lord Byron on His Death-bed
An 1826 painting of the poet's final hours by Joseph-Denis Odevaere.

Annabella Milbanke, aka Lady Byron
Byron's wife in an 1812 portrait.

Lady Caroline Lamb
A portrait of one of Byron's mistresses by Sir Thomas Lawrence.

Clara Allegra Byron
A portrait of Byron's daughter with Claire Clairmont, who died tragically at the age of five.

The Bad Lord Byron (1949)
While Lord Byron was alive his scandalous life was "really the only topic of almost every conversation - the men jealous of him, the women of each other," as the Duchess of Devonshire put it. The fascination lives on after his death, with movies and books delving into the (real and imagined) particulars of his life. This 1949 biopic tells the poet's life from his perspective.

Byron (2003)
Few lives were as drama-filled as that of George Gordon Byron, 6th Baron Byron, also known as Lord Byron. This made-for-television biopic sums up the sexual escapades, literary triumphs and shady dealings of this curious creature.

Lady Caroline Lamb (1972)
Lady Caroline Lamb's assessment that Byron was "Mad, bad and dangerous to know" could just have easily applied to the lady herself. Lady Caroline was fiery and a little unstable when it came to Byron, once threatening to shoot herself if he ever married. This film covering the period of her affair with Byron includes serious acting heavyweights like Richard Chamberlain as Lord Byron and Laurence Olivier as the Duke of Wellington.

Conceiving Ada (1997)
Augusta Ada Byron King, the daughter of Lord and Lady Byron and the poet's sole legitimate child, is something of a cult figure herself. She was a mathematician who contributed important research to the early precursor of the computer. She also inherited some of her father's flamboyant and destructive tendencies. This film starring Tilda Swinton imagines Ada's life.

The Romantics (2006)
This British TV miniseries looks at the lives of the Romantic writers, a group that includes Lord Byron. It also includes people he admired, like Percy and Mary Shelley, and those he mocked mercilessly, like John Keats and William Wordsworth.

Haunted Summer (1988)
This movie is about the fateful summer that Byron, his lover and the Shelleys spent together in Geneva. Though we don't know for sure how the summer of 1816 went down, it's possible that a house full of attractive young practitioners of free love did get a little weird at times. All we know is that by the end of the summer, residents of the house had created both Frankenstein and the basic plot of every vampire movie written since.

The Byron Chronology
The extremely useful Romantic Circles site at the University of Maryland has this chronology of Byron's life and times. Keep track of Byron's endless poems, love affairs, scandals and financial difficulties with this handy timeline!

English History
This site is a treasure trove of Byron-related documents, including online excerpts from his letters, poems, biographies and criticism of his works. There are some interesting finds in here, like the gossipy book that Harriet Beecher Stowe (yes, of Uncle Tom's Cabin) wrote about Byron's marriage to her friend Annabella Milbanke.

Poetry Foundation
The website of the Poetry Foundation serves as an online encyclopedia of all things poetic. The entry on Lord Byron contains his biography, links to his poetry and a bibliography of suggested further reading.

Academy of American Poets
This online resource has an entry on Byron that contains a succinct biography, plus links to his poems and related readings. You can also click on a "Brief Guide to Romanticism" that serves as a helpful introduction to Byron's literary and cultural era.

Byron Biography
The first of the History Channel's five-part biography of Lord Byron. With Greek subtitles, for some reason.

Byron
The trailer of the 2003 biopic starring Jonny Lee Miller.

Newstead Abbey
A video of Byron's ancestral home, which he was forced to sell to relieve his debts.

Letters and Journals
The text of Byron's letters and journal entries.

Childe Harold
The semi-autobiographical epic that made Byron famous.

"She Walks in Beauty"
Online text of Byron's most famous love poem.

"When We Two Parted"
Online text of Byron's poem.

"Epistle to Augusta"
A poem to Byron's half-sister and sometime lover.

Recollections of the Last Days of Shelley and Byron (1858)
Edward John Trelawny's memoir of life with the poets.

Lady Byron Vindicated
A gossipy book by Harriet Beecher Stowe about how scandalously Byron behaved during his marriage to Stowe's friend Annabella Milbanke.

Byron's Will
A scan of the original copy of Lord Byron's Last Will and Testament. Link downloads a pdf file.

Next
More on Lord Byron Navigation