Have you ever noticed at the zoo how all the animals seem rather bored? They spend most of the day sleeping instead of doing cool tricks for the visitors. The zoo animals actually have it pretty good—they get fed, have a nice place to sleep every night, and do not have to worry about being eaten by a grizzly bear. No wonder they are bored. They have nothing to worry about. 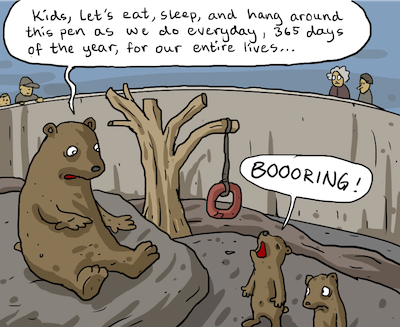 Animal behavior is all about two things: survival and reproduction. In the wild world, those are the only things that matter. Animals at the zoo have the survival piece of the puzzle taken care of, and even their reproduction is often at the mercy of zoo breeding programs.

Animals go through life responding to various things—food, weather, warmth, parents, offspring, mates, and predators. Something that causes a response from an animal (voluntary or not) is called a stimulus. All of animal behavior is based on responding to stimuli from the environment and other animals. While animals do weird things sometimes, like lizards doing push-ups and birds doing the moonwalk, they usually have a reason. Push-ups and moonwalking impress females. When those male lizards are showing off their biceps, they are trying to get a nice lady lizard interested. Same goes for the moonwalking manakins, a tropical bird. It’s all about impressing the other sex.

Watch and Learn
See some ambush predator videos and facts from the BBC here.

Peacocks and Their Giant Tails
Researchers discuss sexual selection and experiment with peacocks in this video.

Learning with Kittycam
What does your cat do all day? Learn what the Kittycam found out.

Walrus Sounds
Animal communication sounds are being recorded and digitized. Listen to some of them here.

Holy Giraffe Fight, Batman
Giraffes fight with their necks. We always knew they were good for something.

Fatal Attractions
Sometimes animals get confused about whom to mate with.

Which Way Should We Go?
Animals other than fish and birds can be good at navigating.

Weird Science
A fish that hunts pigeons on land? Seriously.

Next
More on Animal Behavior Navigation