Finding a mate is a big deal in the animal world, and it accounts for a lot of animal behavior. Since other animals haven’t discovered the internet yet, they can’t rely on dating sites or Facebook for social interactions so they have to meet in real life (gasp). There are two main ways that animals find a mate:

So how do females pick a mate? How do they decide what is sexy? Sexy body structures show off the health and good genes of a male, like fish mustaches. Yes, seriously, fish mustaches are hot.

Understanding what another animal thinks is sexy is sort of like trying to understand fashion. You just can’t. The point is that only males with awesome mustaches get to mate, and assuming the mustache gene is passed on to the offspring, the male offspring of mustachioed fish will also have sexy mustaches that will allow them to mate with whichever female they choose.

Many birds go through sexual selection based on tail length or some other ornamental structure, such as a crest on the head. Peacocks and widowbirds are sexually selected for tail length. 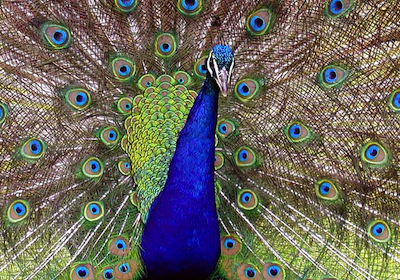 Peacock tails are enormous, and play a role in sexual selection.

If you have ever gone bird watching, or watched the birds in your backyard, you may have noticed that some birds are brightly colored and others are boring shades of brown and gray. Based on what you know about sexual selection, which sex do you think is brightly colored? Did you say males? We hope so, because that’s right.

Being brightly colored, or having extremely long tails (ahem, peacocks) is not a good way to blend in and hide from predators. In fact, it seems like you would be more likely to be eaten if you were sporting flashy feathers because predators would see you more easily. Having brightly colored feathers can make males’ lives more dangerous, but it is a risk they take in hopes of mating successfully. Plus, they don’t really have any choice; they are born this way. Ornamentation is common in many animals, and usually it is the males who have it.

Another way intersexual selection works is by females choosing males who have the best stuff. Usually, that means the best territory. Territories are evaluated based on size and proximity to food sources. Red-winged blackbirds are very territorial, and will attack other animals that come into their space, including humans. Don’t get in the way of a red-winged blackbird. They are seriously fierce little birds.

At the beginning of the breeding season, males arrive on beaches to establish territories and fight over access to females. The largest male, who dominates all the other males, gains access to a group of females called a harem. The biggest and baddest elephant seals control harems of anywhere from 30 to 100 females, and they mate with all of them. Meanwhile, the smaller male seals that did not get a territory and their own harem wait on the sidelines and try to sneak in and mate when the Big Daddy seal isn’t watching. He has to be occupied some of the time if he has 100 female seals to watch over/mate with.

The male elephant seal who controls a harem is called the beachmaster. 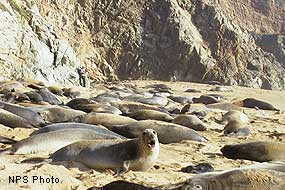 A harem of female elephant seals on the beach.

Many mammals have similar breeding behavior to this—lions, gorillas, and kangaroos all fight over who gets to mate with nearby females. This fighting is a form of agonistic behavior, which is a behavior associated with conflict over access to a resource (including mates).