Sensing and learning from the environment is one thing, but responding to it is another beast all together. Most animal behavior is based on movement—toward food, away from predators, toward mates, and away from smelly farts. There are two main types of movement: kinesis and taxis. (This is pronounced more like tax-is, not the yellow checkered cabs that drive around New York City.)

Kinesis is a movement that does not have any specific direction. It may happen in response to a stimulus, but is not directed toward or away from anything in particular. For example, some bugs change their rate of movement in response to humidity. Pill bugs (also known as woodlice) move quickly in dry areas and slowly in moist areas. Moving quickly in dry areas increases the chance that they will find a wet area, which they prefer.

Taxis is a movement that is directed toward or away from something. Most animal movements are a form of taxis. Animals, even simple ones, move toward or away from all sorts of stimuli, including light, heat, oxygen, humidity or concentrations of chemicals.

There are also some animals that are sessile, meaning they are permanently attached to one place and cannot move, at least for some stage of their lives. Coral, barnacles, sponges, and scale insects are free-living as larvae but once they are adults they settle down and do not move from that spot.

A third type of movement is migration. Migration is a movement from one region to another during a particular season. Many birds in northern latitudes migrate from cold climates to the tropics for the winter, and then migrate back home for the spring and summer. Food is scarce in winter and birds are more likely to find food in the tropics where plants are green and produce fruit year round. More than two-thirds of North American land birds (as opposed to seabirds) migrate to Mexico, Central and South America, or somewhere in the Caribbean each year.

Last time we checked, they don’t make GPS units or Google Maps for birds. Those touch screens just don’t respond to the light touch of a bird feather. How do they know where to go when they migrate? They fly thousands of miles and don’t get lost.

The main way birds navigate when migrating is by using the Earth’s magnetic field. The mineral magnetite is found in heads of migrating birds and fish.

Insects can migrate, too. Monarch butterflies migrate every year, but since monarchs only live 6 weeks, not every generation of monarch butterfly migrates. Only every fourth generation migrates, since the other generations live in spring, summer, and fall. 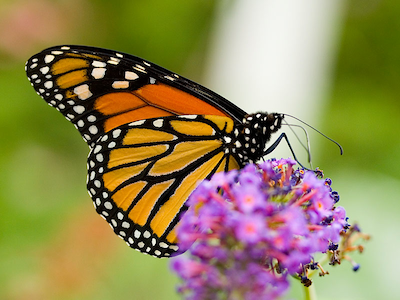