Some animals are loners, avoiding contact with others except when they get into a tiff over a territory or feel the need to mate. Not everybody's like that, though. Mating's all fine and well, but there are other reasons that an animal might want to hang out with others of its species from time to time.

For one thing, being lonely is the worst. For another thing, living with family means protection from predators, as prairie dogs and meerkats have so astutely figured out. Living with others also means hunting with others, and lions know that they are more successful at hunting prey when they have help. Animals that live with others of their same species are called social.

Social animals come from different groups—birds, mammals, and insects can all be social, although of course not every bird, mammal, or insect species is social. Mammalian social groups are usually composed of one male, multiple females, and their offspring. Birds of a feather flock together, as the saying goes. Well, we would too if we were penguins living in the horribly frigid Antarctic.

Some animals, like termites, ants, wasps, bees, and naked mole rats, live in colonies full of worker drones supporting one queen. The queen is the only female that reproduces, and the other animals take care of the house, raise the babies, and find food for everyone. Animals that live in groups like this—that have this kind of division of labor, cooperative care for the young, and reproductive and non-reproductive groups—are called eusocial. Eusocial means "truly social," as opposed to "sort-of social" or "not-really-social" or "has never heard of social networking." 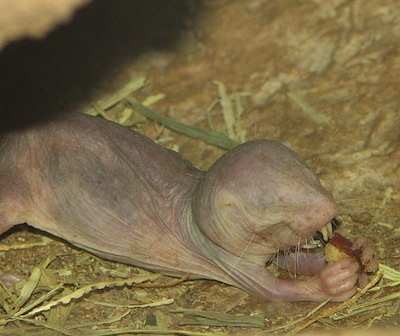 A face only a mother could love. Naked mole rats are colonial animals. They live underground, are almost hairless, and are almost completely blind. Image from here.

Eusocial systems are cool, in evolutionary terms and in real life. From an evolutionary perspective, eusocial systems seem to defy everything we know about evolution—natural selection favors individuals who pass on their genes, so what are all these sterile workers doing raising the queens' babies? We'll tell you when you're older…five minutes older, or however long it takes you to read the next few paragraphs.

Eusocial systems are cool because they're like extremely well run armies, with soldiers each assigned to different jobs. Watching an ant colony is like watching a finely tuned machine. Ants have complex social structures in which individuals belong to different classes, or castes, including worker, drone, and queen.

All the workers are female and don't reproduce. Male drones are there to mate with the queen, and that is it. They wander around until mating time and die afterwards. It may not be a very glamorous life, but someone has to do it. Female workers divide up the jobs to maintain the colony including foraging, defending the nest, constructing the nest, and taking care of the queen. The queen is all-important in the colony.

In most animal species, individuals are looking out for number one: themselves. Sometimes though, animals do nice things for each other, like hold open the door or let their neighbors borrow a cup of sugar. Sometimes family members share food, and females occasionally help raise their sisters' babies and give up their own chance at reproducing. When evolution favors animals helping their family members, it is called kin selection.

Animals that give alarm calls when a predator approaches put themselves at risk by drawing attention to themselves while warning their kin. This type of behavior, where one individual sacrifices some of their own fitness for another individual, is called altruism.

Animals are generally really selfish, so the existence of altruism takes some explanation. After all, individuals reducing their own fitness shouldn't be favored by natural selection. Here's how we can explain this counterintuitive idea: Animals that live in family groups or colonies can aid their relatives, increasing the potential for more of their family members to have babies. More of your relatives' offspring = more of the family genes passed on.

A scientist named William Hamilton came up with a formal rule to predict when altruism is favored by evolution. It depends on how closely related the animals are—siblings share half their genes, so an animal is more likely to help its sibling than say, its third cousin once-removed. Let's break down Hamilton's Rule.

Hamilton's rule states that evolution favors altruism if the relatedness multiplied by the benefits are greater than the cost to the altruist of not reproducing (having fewer babies). To put it in an equation, we have:

If the cost of you helping your sister (r = 0.5) raise her kids is one fewer kid for you (C = 1), how many extra kids would your sister have to have for altruism to be favored?

The answer is more than two. Since kids only come in whole numbers, your sister would have to have three extra kids for altruism to be favored.

Hamilton's rule helps explain evolution of colonial animals. They're all closely related, and they help each other raise more offspring. Evolution favors altruism if the benefits of helping others outweigh the costs of helping. So, a prairie dog that makes an alarm call may be putting itself at a risk of becoming somebody's lunch, but all of the prairie dogs' relatives have a better chance of surviving and having more kiddos.

Altruism is rare in unrelated animals, but occasionally it does occur. It's most common in primates in stable social groups. If individuals come into contact with each other frequently, they both benefit from cooperating.