Hormones are small chemicals that get released in the body in response to a certain trigger. Once set loose in the body, they travel through the blood to a particular area, where they bind to a receptor and cause some sort of biological response.

We're going to go ahead and assume that you don't eat food 24 hours a day, seven days a week. Since you, and most other animals, aren't chowing down constantly, that's where hormones come in to play. Digestion hormones always stand at the ready, but are only released when food needs to be digested to build up the body's energy stores. Since these hormones wear Team Digestion shirts, they'll act to stimulate certain chemical reactions to facilitate digestion of fatty acids, for example.

There are three primary digestion hormones with some fancy names: gastrin, cholecystokinin, and secretin.

First there's gastrin. It's released in the stomach by peptide-containing chyme. That's the gooey mess of partially digested food. This hormone stimulates the secretion of gastric acid—aka hydrochloric acid (HCl)— by the parietal cells, which then gets to work breaking down that leftover slice of pepperoni pizza. It also makes those chief cells secrete pepsinogen so proper digestion can occur.

Cholecystokinin gets released when amino acid- or fatty acid-enriched chyme greets the small intestine. When it swoops into action, this hormone will stimulate the release of bile and pancreatic digestion enzymes that can further break down the food. Since it's multi-talented, it also blocks peristalsis (muscle contractions that move food through the digestive system) and gastric emptying, keeping the chyme in the intestine until it's good and ready to move further down the digestive system.

Secretin is released by the pancreas when the acidic chyme gets to the small intestine, and it's the stuff that stimulates bicarbonate (HCO3-) release. This way, all that acid the stomach just whipped up doesn't chew up the intestinal lining in the duodenum. That highly acidic environment was great for the stomach, whose hardy walls can tolerate it as it breaks down food. That corrosive environment doesn't play so well in the intestine, which is where secretin comes in. It's one of cholecystokinin's best buds, and they work together in releasing those pancreatic enzymes. This is molecular teamwork at its finest.

For these three hormones, showing up and doing their thing is part of the regular digestive process. Other hormones are only released when things get out of whack. When duty calls, these hormones swoop into action. Think of them sort of like a chemical SWAT team. These hormones kick in and help with osmoregulation and blood pressure when the body's balance gets off-kilter. Since we just finished talking about maintaining water and salt balance in the kidney, we'll look at the hormones that help in that process:

Say your blood is hyperosmotic. Perhaps you've just eaten a bag of salt-and-vinegar potato chips or you are on the elliptical, sweating (it's mostly water, by the way) profusely to work off that large bag of M&Ms you had for lunch. Either way, your blood osmolarity is going to skyrocket. When certain osmoreceptor cells in the hypothalamus (an area of the brain) sense even slightly hyperosmotic blood (blood that is low on water), they stimulate the release of antidiuretic hormone (ADH) from the nearby pituitary gland.

When ADH is released into the blood, it travels to the kidney and makes the nephron's distal and collecting tubules more permeable to water. It adds these water-selective aquaporin channels to the cell membranes, and more water is taken from the tubule and put back into the blood. The more circulating ADH, the more water that is reabsorbed and returned to the blood. It cranks up the body's ability to pull water from ingested fluid to 11.

If the body is conserving water, the urine volume decreases. So, ADH doesn't stop there. It also increases urea reabsorption at the ascending loop to help maintain the high osmolarity in the interstitial fluid, and gets the ascending loop to work in overdrive. In the end, ADH decreases the blood osmolarity (by increasing the amount of water conserved) and gets it closer in line to where it should be. Envision ADH as a boxing trainer, screaming at a heavyweight to gut out just ten more push-ups as he trains for his championship bout. Except instead of a mealy-mouthed boxer, it's a hormone. And instead of push-ups, it's water reabsorption.

But wait, that's not all. If your blood osmolarity changes by just 2–3%, the same osmoreceptor cells will also influence the perception of thirst. If you are in the sweltering jungle and sweating profusely, your blood osmolarity will increase, and you'll combat this loss of fluid in two ways: by increasing the desire to find a clear stream of water, and by releasing ADH to increase water reabsorption. When you finally have to tinkle, it'll just be a little bit.

The opposite happens when the blood osmolarity is too high: ADH levels drop off, the collecting duct isn't very water-permeable, and you make lots of dilute urine.

Perhaps you've cut your finger pretty badly while slicing up a pineapple, and you've lost a lot of blood. Yikes. In more physiological (and less gory) terms, your blood volume and/or pressure have dropped. In this case, your body will activate the renin-angiotensin-aldosterone system (RAAS). 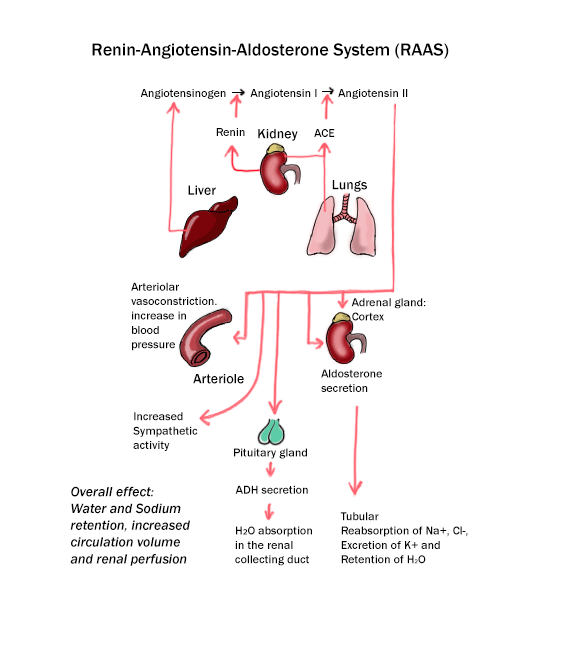 When the body first recognizes decreased blood volume/pressure, the kidney will secrete a hormone called renin. Renin stimulates a chemical reaction that creates a peptide called angiotensin II. It's a handy peptide to have around when you’re dehydrated. It causes a tightening of the blood vessels and increases blood pressure. It also stimulates ADH secretion and thirst, increases salt and water reabsorption, and stimulates the release of aldosterone. Got all of that? Good.

Summary of the handy osmoregulating hormones

Aldosterone is released from the adrenal cortex, but acts at the thick ascending Loop and the distal tubules, causing greater Na+ and water reabsorption. Not only that, but it also stimulates K+ and H+ secretion into the future urine at the distal tubule. Basically, aldosterone is telling the kidney to preserve more Na+ and water, because more of those two things means more blood volume and increased pressure—just the things you need when you're bleeding profusely.

To recap: renin leads to angiotensin II, which leads to aldosterone, which acts on the nephron to make sure you don't pass out on the kitchen floor due to severe blood loss. Whew. Saved by the renin. 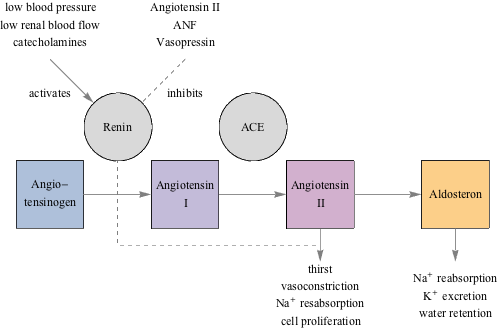 Here's a schematic diagram describing how RAAS is activated and what each hormone does.

That's all well and good, but sooner or later you're going to have to switch off the reinforcements. There's a peptide hormone that counters RAAS, and works to decrease blood volume. When the heart senses increased blood volume and/or pressure (perhaps because RAAS is no longer needed since it got things back on track), it releases ANP. This peptide travels to the kidney where it blocks renin release (and thus blocks angiotensin II and aldosterone secretion) and decreases water and salt reabsorption at the collecting duct. It gets the blood volume/pressure back to where it should be.

Think of these three osmoregulating hormone systems as The Three Amigos, The Three Stooges, or the Charlie's Angels of the kidney. They work together to make sure the kidney is able to control salt concentration, blood volume, and blood pressure.

Now let's take a step back and think about this. We've been talking about a lot of different topics: nutrition, digestion, and salt balance, but they don't all exist in a vacuum. Nope, they all lean on each other to make up our happy existence like the three beams supporting a tee pee. Without nutrition and digestion, there wouldn't be any salt for the body to balance. It goes the other way too; as the body balances its salt, it sends signals to the brain to tweak the nutrition you take in. It's what makes you thirsty. It's all connected like a finely tuned machine, all aimed at keeping you chugging along, happy, and healthy.

We know you’re dying to ask. Which came first: gastrin or gastric acid? We agree, it’s the chicken and egg conundrum of the excretory system. It's a very important question; one that human life depends on greatly. Gastric acid was found in the 1820s to be the digesting juice in the stomach. Later, in the early 1900s, the gastrin hormone was found and isolated, and given the inspired name. There you go, now you can finally sleep easy at night with that vital knowledge.