Animal Nutrition and Digestion - Water Balance and the Kidney

Water Balance and the Kidney

Who exactly is running the show when it comes to regulating the salt and water balance of the body? Say hello to the excretory system, which also gets rid of metabolic wastes, such as ammonia. Each animal's system is slightly different, depending on their environment, but the general functions of the excretory system are pretty similar:

Here's a lightning round summary of these processes:

Now that we're clear on general excretory mechanisms, let's focus on the mammalian system, where the kidneys are in charge of osmoregulation. The kidney is divided into two parts: the outer cortex and the inner medulla. In the cortex, the osmolarity is relatively low (think less salty), around 300 mOsm/L or so, but as you travel further down into the medulla, the osmolarity gets much higher (think more salty). This is important for later, so stick that fact in your back pocket. 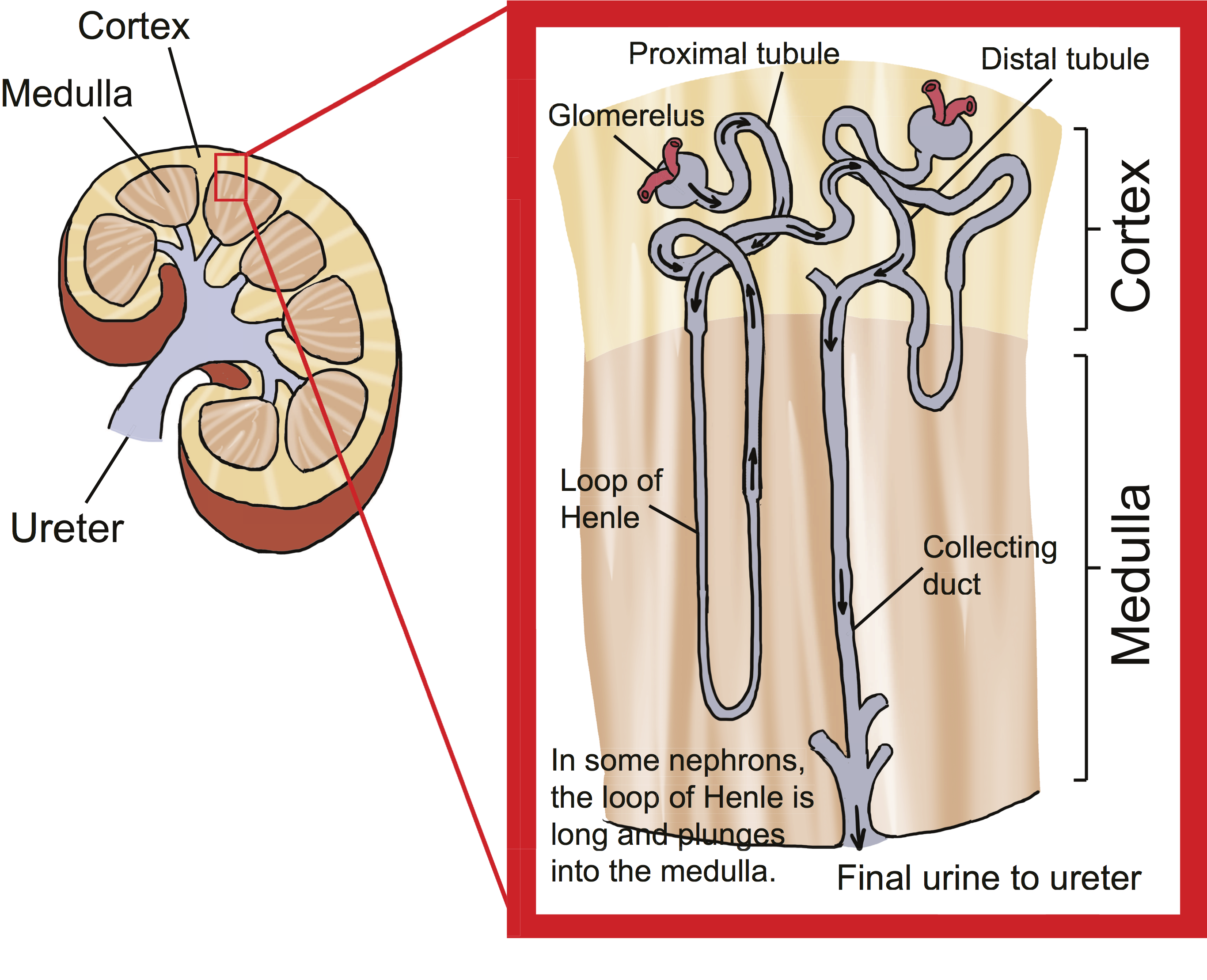 The kidney is divided into the outer cortex and the inner medulla. 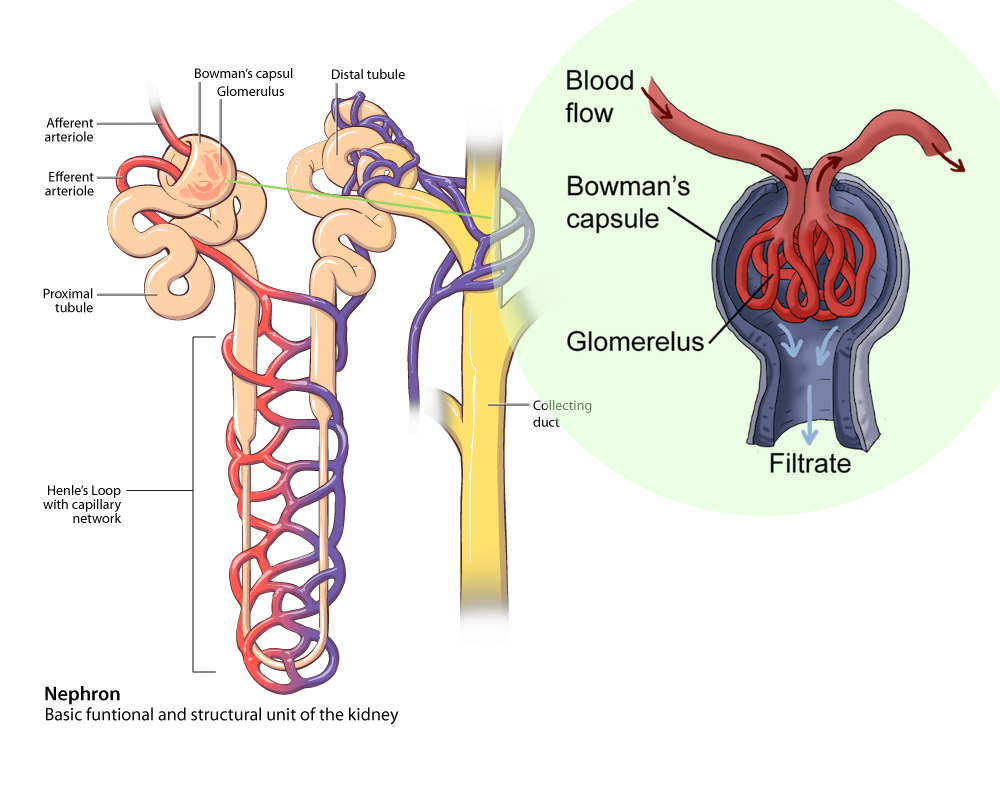 Spanning these two compartments are the nephrons, where all this osmoregulation stuff goes down. The picture above is of one nephron, and we’ve got over a million of them in just one kidney (so that’s two million total for those playing at home). The nephron is made up of a tubule, a glomerulus (a tangle of capillaries), and a cup-shaped Bowman's capsule at one end that surrounds the glomerulus.

Filtration (Bowman's capsule, proximal tubule): When blood enters the kidney through the renal artery, it’s jam packed with nutrients, water, proteins, and other stuff the body needs. It also has some nasty things the body wants to dump. When blood flows into the glomerulus, blood pressure forces water and solutes out of the capillaries and into the lumen of the Bowman's capsule. 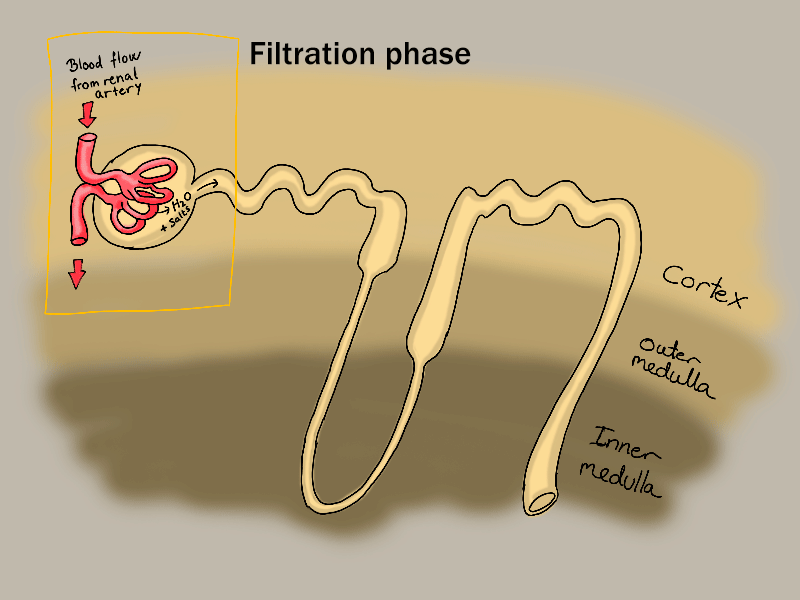 The nephron spans from the cortex to the inner medulla. Each section of the tubule is permeable to different nutrients or wastes.

The lucky water, salts, amino acids, vitamins, and wastes that make it into the capsule are collectively called the filtrate, which then make it past step one. Because the filtrate is being filtered from the blood into the tubule, this stage of excretion is called filtration. This whole science thing is pretty easy, right?

In the proximal tubule, NaCl (sodium chloride) and about 65% of the filtered water gets reabsorbed into the interstitial fluid. It then diffuses into the capillaries that run opposite to the filtrate flow. There is also reabsorption of glucose, HCO3- (bicarbonate), and other important nutrients, as well. The blood wants what it doesn't have, in a classic "grass is greener on the other side" scenario.

Speaking of HCO3-, that buffer molecule is super important in regulating the acid/base balance of the blood. A lot of that balancing act happens at the proximal tubule. When the blood is too acidic, H+ (hydrogen ions) will get sucked into the tubule to get rid of excess acid and HCO3- will be reabsorbed to better buffer the blood.

All of this secretion and reabsorption can seem haphazard, but it's really highly regulated. By the time the filtrate reaches the end of the proximal tubule, it is isosmotic to the interstitial fluid surrounding the tubule.

Next, the filtrate takes a steep turn down towards the medulla, and into the descending loop of Henle. The body does some more reabsorbing on this leg of the trip, but the only thing the body is sucking up is water. The tubule membrane in this part of the nephron is selectively permeable to water, so it prevents salts from being reabsorbed, upping the filtrate concentration and osmolarity (think increased saltiness) in the loop even more. 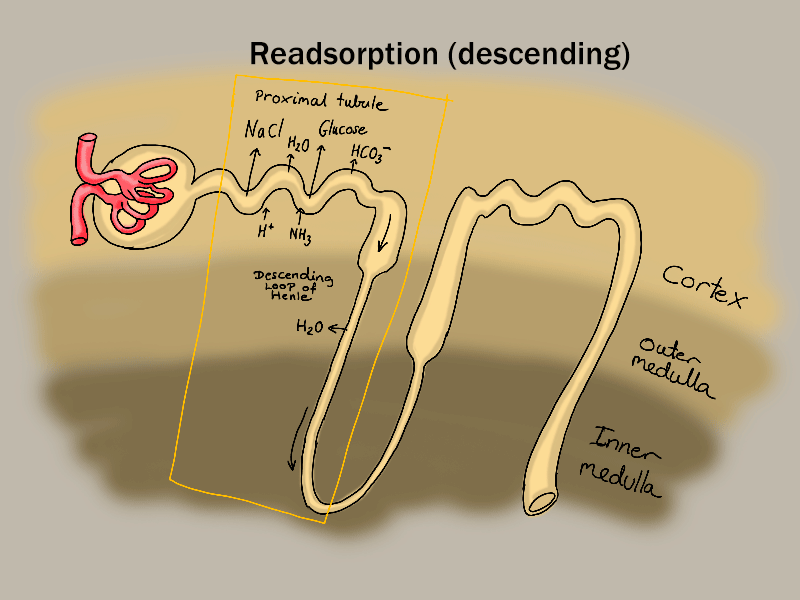 The length of this descending Loop is important for water conservation. The longer it is, the more water that gets reabsorbed back into the body fluids, and the more concentrated the urine will be. The shorter it is, the less water is conserved, and the urine is more dilute. Animals that don't have ready access to water (such as camels and the kangaroo rat) will have nice, long descending loops to conserve as much water as possible, making their urine super concentrated. Fish, on the other hand, have more than enough water, and their descending Loops are short since water conservation isn't really a top priority. They're literally swimming in it.

After the filtrate travels through the descending loop, it takes a sharp curve (the actual bend in the Loop), and starts moving back up the ascending part of the loop. Here, the Loop changes things up a bit, and the membrane becomes permeable to salt instead of water. At this point, there’s more salt than water and salt travels through the membrane. Urea is also permeable in the lower part of the ascending loop.

As the salt leaves the tubule, the filtrate becomes less concentrated, and hypoosmotic to the surrounding interstitial fluids. In the top, thick part of the ascending loop, there is no confusion: salt is the favorite child. The tubule actually expends energy to pump it through the membrane, but leaves water and urea in place. Salt is on its way to Disney World while the water and urea are left home to vacuum and take out the trash. Lucky salt. 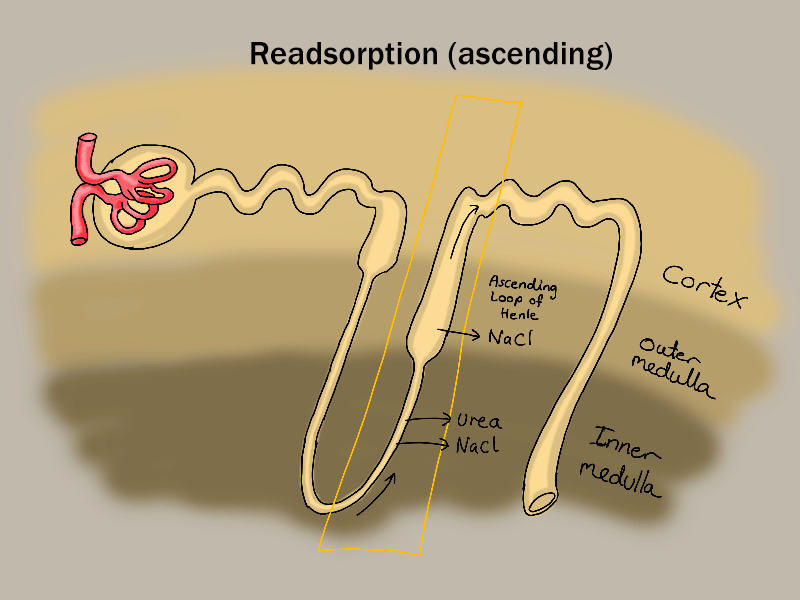 Secretion (distal tubule / collecting duct): In the next phase of urine's journey, ions and water can be secreted into the tubule. It's the opposite of reabsorption—instead of the body pulling all the useful stuff it can from the tubule, now it pumps extra stuff back in. When the filtrate gets to the top of the loop, it levels off and enters the distal tubule.

After the distal tubule, the urine flows into the collecting duct, which is the body's last chance to squeeze out any bits of watery goodness before saying sayonara. It's here that the concentration of urine is determined and regulated. If you’re a camel in the middle of the desert, it's the collecting duct, and the hormones that act on it, that prevent you from drying out and becoming a glorified raisin. When the hypoosmotic urine hits the collecting duct, the body will pump water back into the blood where it's needed, and the camel's urine becomes even more concentrated.

Urea also gets pumped out of the collecting duct, which might sound a bit counterintuitive, since urea is toxic and we want it out with the urine. We’ll get to that in a minute, but for now, know that some of the urea gets reabsorbed. 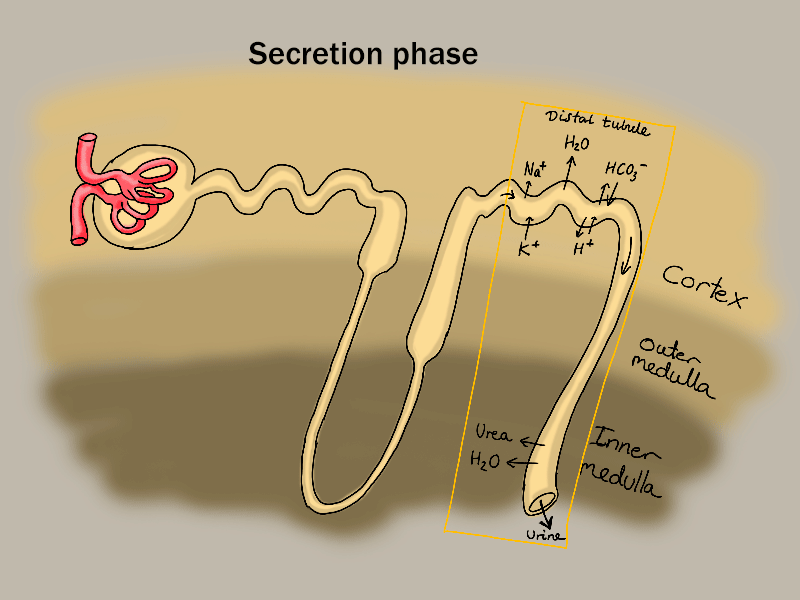 Excretion (ureter / urethra): Now that urine is urine—and not a mess of proteins, urea, and potassium ions—it's time to excrete that yellow stuff out of the body. From the collecting duct, urine goes through the ureters and into the urinary bladder. This is where your pee is stored. When the bladder fills up, the body senses the volume and flips a switch in the brain that gives you that "I gotta go!" sensation. Assuming you can find a toilet (or a fire hydrant), the urine will flow out of the urethra and be expelled from the body.

Between the two of them, osmoregulation and excretion make sure that our bodies retain water when we are dehydrated and that we produce dilute urine when we have been gulping down copious amounts of water. These important systems protect us from various disorders that are associated with abnormal ion concentrations, including neurological problems. If your bodily water level drops too much, your blood volume will decrease, your brain will shrink, and you’ll have major problems.

Earlier in this section, we talked about how the concentration gradient really regulates this whole osmoregulation thing. Since it's a super important part of how the kidney does its job, and since it's worth taking the added effort to understand, we're going to look at it in a bit more detail.

There are two key ways that the kidney is able to maintain this concentration gradient: the countercurrent multiplier system and the vasa recta (a group of blood vessels in the kidney).

First things first—we'll start with the countercurrent multiplier system. The countercurrent part comes from the fact that the filtrate flows in opposite directions through the descending and ascending portions of the loop of Henle. That is, it has countercurrent flow. The filtrate flows down the descending loop and up the ascending loop, so they end up passing by each other going in opposite directions, like two cars passing on a road. We're sure they say 'hello' to each other as they pass. It's a filtrate thing.

When salt from the filtrate is reabsorbed at the ascending loop of Henle, the osmolarity of the interstitial fluid in the medulla gets higher. This hyperosmotic interstitial fluid is on the hunt for water to balance it out. And guess who’s there to provide it? The descending loop, which is water permeable and hands it over via osmosis. The whole system is rigged to ensure that the osmotic gradient remains constant, so both sides of the loop can continue doing what they were meant to do.

Urea plays an important part in maintaining this gradient. Urea gets reabsorbed from the collecting duct and then is secreted back into the loop of Henle. This circulation of urea is important to keeping the concentration gradient from being isotonic. A little more than half of the urea that is filtered from the blood is excreted in the urine. The other half just keeps cycling around and around, helping keep the osmolarity unbalanced.

We know it's complicated, but it is pretty cool to understand how all these different tasks help maintain the overall function of the kidney.

That’s well and good, but there's a major problem. If more and more water is being sent out of the descending loop into the interstitial fluid, we'd think that at some point it would strike an osmotic balance, and the kidney's work would come to a screeching halt as the concentration gradient disappears. Fortunately, vasa recta help prevent this from happening. They pull the water from the fluid into the bloodstream, keeping the high osmolarity at the inner medulla, and helping the body preserve even more water. 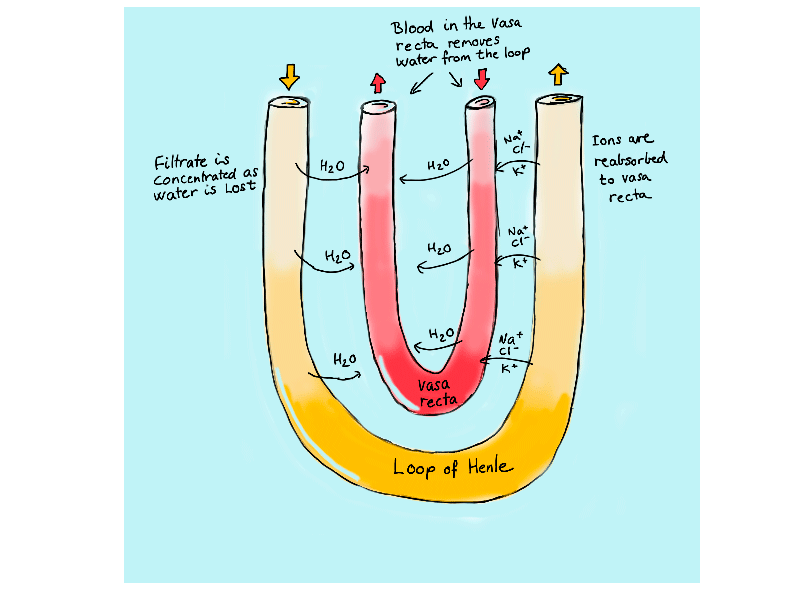 The vasa recta are a group of bobby-pin shaped blood capillaries that provide oxygen and nutrients to the kidney's medulla. The blood in them flows counter to the filtrate flow in the Loop of Henle. Luckily, these capillaries also happen to be permeable to both salt and water. Since the descending loop is always pushing out water, the vasa recta pick up any extra so that the osmolarity gradient is maintained. Likewise, the ascending Loop of Henle is always pumping out salt, and the vasa recta support the important osmotic gradient. Whatever water or salt is sent out of the tubule gets reabsorbed by the vasa recta to prevent the inner medulla from diluting. How's that for teamwork?

The kidney is a pretty awesome organ. While other, more famous organs get invited to all the cool parties, this essential piece of the body doesn't get much street cred. It's small, and it can't help you decide whether your date will like the blue or green shirt better. It's still what we here at Shmoop HQ like to call a "super organ." Try these fun facts on for size: