Our bodies are pretty complicated. We're talking Lost complicated. For everything to work as it should, proper biological processes require precise concentrations of different ions: sodium (Na+), H+, HCO3-, potassium (K+), etc. All of these bad boys are important for bodily function, but when there are slight changes in these concentrations, things get more than a little screwy. Certain foods or drinks can throw these ratios off kilter. Cells swell or shrink. Brain cells can't communicate anymore. It's bad news. Luckily, our bodies have a mechanism to keep the motors purring, setting ion concentrations back in their proper ranges.

Consider the fresh water fish. Pick your favorite: bass, perch, banded shovelnose catfish, whatever. Go ahead, we'll wait. These guys swim around the water all day, and when they open their gills, water comes in. All this water ends up diluting crucial ion concentrations in our fish friend, and things get all out of whack.

Luckily, evolution has taken care of our finned friends. When a fish guzzles down water, his kidney maintain the salt and water balance through osmoregulation. Essentially, fish pee a lot. Try not to think about it the next time you're swimming in a lake. 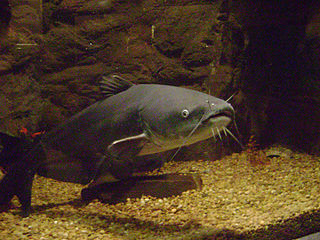 Thanks to osmoregulation, fish don't need umbrellas to protect them from water. Image from here.

Before we get into any kidney details, we'll focus on the concept of osmoregulation, or the way animals control ion concentrations and water balance. The easiest way to set things back to normal is with water and osmosis. When the inside and outside of the cell membrane have different ion concentrations, or osmolarity, water will move to the side that has the highest osmolarity. This is an attempt to even the concentration out. Water is a bit of a control freak that way. 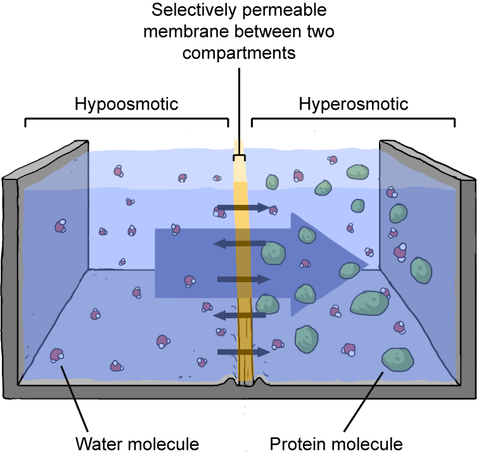 When a solution is hyperosmotic, water will flow to that solution, to dilute it. Water just wants everything to be fair and equal.

When the osmolarities across a membrane are equal, the environment is said to be isosmotic, and the same amount of water will flow into the cell as flows out. Remember, just because the concentrations are balanced doesn't mean the water will come to a screeching halt. Instead, the water will still be moving, but just at equal rates so the overall amount of water and the ion concentrations on either side do not change.

When you run out of things to talk about on a blind date, just bring up the fact that the osmolarity of human blood is around 300 mOsm/L (milli-osmoles per liter) and the more concentrated seawater is roughly 1,000 mOsm/L. It will spark conversation, for sure.

This whole osmoregulation business is usually pretty versatile, and can change depending on the animal's environment at any particular moment. Take salmon, for example. They are born in fresh water lakes and rivers, travel to the salty ocean water to do the horizontal tango (we're not sure if that slang applies to fish, but roll with us), and then return to fresh water to lay their eggs. When they are in fresh water, they are hyperosmotic to their environment. As a result, salmon don't drink much water and pee a lot to maintain their water balance. But when they head out to open sea to sow their wild fish oats, they become hypoosmotic. They are then looking to preserve as much water as possible. To compensate, salmon excrete small amounts of very concentrated urine.

Osmoregulation doesn't just regulate the concentration differences between an animal and its environment. Normal, everyday biological processes do all sorts of stuff with ions that mess with the balance. Some processes require ions, while others end up excreting ions. There are ions being thrown all over the place. While doing its thing, the body ends up screwing up important solute concentrations. Osmoregulation saves the day yet again, and makes sure to set things back where they belong.

Here's one super important example: when biological proteins and nucleic acids, which makes up DNA, are converted to energy or some other biological compound, they release ammonia (NH3) as waste. First of all, the ammonium ions throw off the ion balance. Second, ammonia is toxic, and our bodies must get rid of it, pronto.

How does the body regulate the excretion of this toxic ammonia, you ask? It can be excreted in three different forms based on the animal's chosen means for osmoregulation. The only safe way to have ammonia in the body is having it at super low concentrations, so the only animals that excrete nitrogenous waste as ammonia have lots of access to water. Fish are able to dilute ammonia concentrations to levels where it won't kill them. Camels can't—their water is way too valuable.

Urea is another way for animals to get rid of this waste. It's made when ammonia and carbon dioxide meet ATP, or the energy used by the body at the cellular level. Since its pretty safe, urea can be stored at high concentrations. Many amphibians excrete nitrogenous waste this way. Lots of ammonia waste can be stored as urea, the only downside is that urea takes a lot of energy to produce.

Most land animals excrete uric acid instead of ammonia since it's relatively non-toxic. Uric acid is not water-soluble though, and gets excreted as a semi-solid paste. It's roughly the consistency of hummus. We wouldn't recommend it with pita, though. It's great because it doesn't use up much water, but uric acid is energetically expensive, and gives birds solid pee. Yes, solid. Osmoregulation at its finest.

Wondering how us homosapiens get rid of ammonia? We also get rid of these wastes via urea, not uric acid. We'd probably be calling a lot more plumbers if we had solid pee.

The best example of osmoregulation is the kangaroo rat. These creatures that look more like the latter half of their namesake than the former live in the hot and dry desert. The ways that they've adapted to their environment are pretty darn cool: