Animal Evolution and Diversity - Vertebrates Take to the Beach

Vertebrates Take to the Beach

First, the ancestors of frogs and salamanders crawled out of the deep blue sea. Then, for a while, dinosaurs ruled the earth.

Weather has always been unreliable. What do you do if water, the thing you need most, just goes away? More than 350 million years ago, a few freshwater vertebrates developed the ability to breathe air and pulled themselves around on land when water was scarce.

The ancient ancestors of amphibians had features that combined some of the features of lobe-fish and lungfish: lungs to breathe air and more limb-like fins that could maneuver on land. As the Little Mermaid famously observed, though, fins don't work so well on land. In amphibians, their fins became legs and feet with toes. Dinglehoppers, on the other hand, work everywhere.

Moving onto land opened up a whole new set of unexploited resources. Arthropods had taken to the land 100 million years earlier and were free for the snacking. As the first vertebrates on land, amphibians had the place to themselves for a while. Before reptile competition appeared, amphibians came in many more shapes and sizes than they do today, with one the size of a modern crocodile. Modern amphibians include frogs, salamanders, and caecilians.

In addition to lungs and limbs, amphibians also evolved other traits for life on land.

Amphibians live a double life and are split between two worlds: terrestrial and aquatic. No, not like Clark Kent or Peter Parker. Amphibian means "both kinds of life." During the first part of its life, a frog is a legless, water-breathing aquatic herbivore called a tadpole. After metamorphosis, the adult is a tetrapod (four-legged), air-breathing terrestrial carnivore. Taking off some glasses and putting on a cape can't really compare to switching from breathing water to air and exchanging fins for legs.

Check out the drama of becoming a tadpole.

Amphibians are closely tied to water their whole lives. Their skin has to stay moist for gas exchange. Some have small lungs, but those lungs are not very effective, and amphibians rely on staying wet to breathe. Amphibian eggs also need to be in or very near water so that the young are can swim away when they're born. The eggs don't have shells and are covered with a sticky material that floats together in a mass while the little guys develop.

There are three living orders of amphibians:

When they came on land, amphibians kept a connection to life in the water. About 300 million years ago, reptiles were the first vertebrates to become completely terrestrial.

The earliest reptile looked like a small, stumpy lizard, but its descendants were nothing but impressive. Flying reptiles took over the air. Some reptiles went back to the ocean. Others reared up on hind legs and lorded over the land.

Big design changes were needed to become fully terrestrial. Life started in water and we're still mostly water on the inside. Reptiles developed watertight and waterproof skin. Since moving around on land is a very different process than moving in water, reptiles developed strong muscle and skeletal systems, as well as claws and nails to help get some traction on land.

Reptiles' ancestors were amphibians, and the two can look a bit alike. However, reptiles are far more adapted to life on land.

Another big evolutionary change is the amniotic egg. Despite living on land, life still begins in water for everyone. Reptiles, along with birds and mammals, are amniotes. An amnion is a bag of fluid where an embryo develops. All animals still start their life in water, even if the water is contained in an egg or inside the mom. Reptile eggs have an amniotic pouch inside, sealing up a private pool for the embryo. The eggs are also hard-shelled and waterproof to resist drying out.

Evolution is a response to the environmental and ecological challenges faced by an organism. In other words, if an animal has the skills it needs to get enough to eat and be able to reproduce, it's pretty well adapted to wherever it lives. But what if conditions change? That happens all the time. Animals that have the right characteristics to survive a change in conditions are the ones who survive. Fortunately for life on earth, no two organisms are exactly alike, even ones from the same group living at the same time and in the same place.

One of the many times conditions made a big change was around 250 million years ago. Weather on land was getting drier, not a good thing for amphibians. The early, small reptiles got their chance to take over. Jurassic Park, here we come. Dinosaurs evolved into many forms and took over the land. Pterosaurs, or flying reptiles, took to the air. Ichthyosaurs and plesiosaurs, swimming (but air-breathing) reptiles, moved back to the ocean. 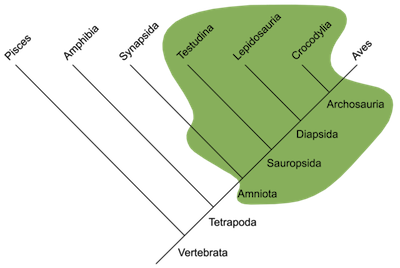 The reptiles are shown in green, including both extinct and modern reptiles.

A reptile-like vertebrate ancestor led to dinosaurs and modern reptiles, as well as to birds and mammals. The branches split after the development of the amniotic egg. Some of the major groups in the tree are named based on a feature of the skull that they all share, the number of openings behind the eye. Anapsids (turtles) don't have any. Synapsids have one and diapsids have two.

The synapsid line eventually leads to mammals. The turtles (anapsids) branch off next. The diapsid line branches into the rest of the extinct and current reptiles, as well as birds.

The two main classes of dinosaurs are Ornithischians and Saurischians. These groups are named after their hip bones (bird-like or reptile-like). The bird-hipped ones were mostly larger herbivores, and the reptile-hipped ones were the speedy, carnivores.

Reptiles were the lords of all they could see for more than 200 million years. What happened? We don't have a simple answer. The most widely accepted hypothesis is that a an asteroid collided with Earth. Since we don't have a time machine handy, we might not ever know for sure, though. Whatever the cause, dinosaurs disappeared and left the stage open for other vertebrates.

The dinosaurs are gone, but there are still lots of reptiles around. Currently, there's is a lot of debate about how to divide them up. Some scientists feel that birds have enough similarity to some reptiles to be grouped more closely. Other scientists group modern reptiles into one class divided into a few orders and others into different classes. Let's go with the simplest. The three major classes of reptiles we have today are:

Testudines: These are the turtles. Terrestrial ones are usually called tortoises and aquatic ones include sea turtles and fresh water terrapins. The most noticeable thing about a turtle is the big shell covering most of its body. This is for protection; turtles can pull their head and limbs inside in an emergency. Turtles on land have feet with claws, while aquatic turtles have feet shaped like flippers. None of them know karate, though, despite rumors to the contrary.

Lepidoposaura: This is the biggest group of modern reptiles. This group has a unique skull called a kinetic skull. The joints in a kinetic skull are very loose and mobile. The jaws are not joined directly to the head and can open extremely wide so that lizards and snakes can swallow really large prey.

There's a simple distinction within this group: lizards have legs and snakes don't. But there's always an exception to the rule right? There are in fact some legless lizards, so another helpful distinction is that lizards have external ears and moveable eyelids, if you ever choose to get that close.

Crocodiles and alligators are the only reptiles with a four-chambered heart, an evolutionary development that becomes standard in birds and mammals. A four-chambered heart is more efficient, fully separating oxygenated and deoxygenated blood, giving the animal more endurance. Crocodiles share another trait with birds and mammals in that they exhibit parental care for young.

Nothing we can dream up comes close to reality. Watch as these Surinam toads hatch from eggs embedded in its mother's back.