Animal Evolution and Diversity - Get A-head

From here on out, we're going to be talking about the Bilateria, or animals that have a body plan that is bilaterally symmetrical. The remaining animals in the animal kingdom have a front and back, top and bottom, and right and left. Bilateria also have a triploblastic embryo, which means that it forms three germ layers. ("Triplo-" means three and "blast" means a sprout or bud..) 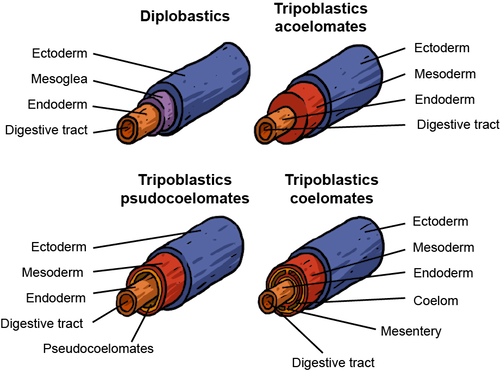 The acoelomates include two phyla, Platyhelminthes and Nemertea (otherwise known as the flatworms and ribbon worms). These animals lack an internal cavity filled with fluid and a circulatory system. They have flat bodies, which means all of their cells are close to the surface so they all have easy access oxygen. These animals don't have the ability to move about on their own. What they do have are true nerve and muscle tissues. See an example here.

Flatworms and ribbon worms have a head. This evolutionary development is called cephalization. This means that there is a true front and back end. Flatworms and ribbon worms have one or more ganglia, a collection of nerve cells that helps control nerve function in the organism. This is like a super-simple brain. These worms also have sensory organs located in the head, another aspect of cephalization.

Flatworms, phylum Platyhelminthes, are mostly marine animals. A few freshwater species splash around, too. Planarians, flukes, and tapeworms are all flatworms. All can reproduce sexually or asexually, though the methods differ between them.

Some flatworms have found efficient, yet creepy, ways to find food. Tapeworms and flukes are parasites that inhabit a larger animal and use its resources. Blood flukes first inhabit snails and then move into the blood vessels in human intestines (escargot, anyone?). Tapeworm heads are armed with suckers and hooks that lock its mouth into the intestines of the host and steal digested food directly from the source. Since they don't even have to digest their own food, they don't have a system for it. Best of all, tapeworms can grow to over 20 meters long inside a host.

The members of the phylum Nemertea are called ribbon worms or proboscis worms. "Proboscis" means a long appendage from the nose-like area. Unlike flatworms, ribbon worms have a small fluid-filled space near their front end. The worm uses water pressure to push out their proboscis, which is used to capture prey. Some things are better seen than described. Some ribbon worms can grow up to 30 meters long. How's that for nightmare fuel?

The next branch of Bilateria is the pseudocoelomates, which includes two phyla, Rotifera and Nematoda, otherwise known as the rotifers and nematodes. Most rotifers live in fresh water and are very tiny, but still have a complete digestive tract and other organ systems. The pseudocoelom houses the internal organs and acts as a hydrostatic skeleton (that's also how jellies move). Nutrients and waste move through the fluid.

Rotifers get their name from a special circle of cilia around the mouth. (Rotifer means "wheel-bearer.") The cilia swirl water into the mouth, bringing in microorganisms to eat. Here's an example.

Once again, truth is stranger than fiction when it comes to reproduction. Some species of rotifers are only female and only produce females from unfertilized eggs. Other rotifers produce two types of unfertilized eggs, which turn into females and a weird male that can't even feed itself. It only exists to produce sperm. The sperm fertilize some of the eggs, which turn into a special kind of zygote that can wait out a dry season until better times come around. When rain arrives, the rotifers will skip the fertilization part and females will make only females again.

Nematodes are the other pseudocoelomate. They're called roundworms, but they're not round. Instead, they're smooth and without segments.

Roundworms are everywhere: in salt and fresh water, in plant tissues, in the soil, and in animal tissues. They are even in our puppies.

Roundworms can be found just in just about every climate, from arctic areas to deserts and everywhere in between. There are thousands of known species and probably many others that haven't been discovered yet. They have a similar digestive system and hydrostatic skeleton to the rotifers, but have a tough covering called a cuticle. And as a surprising turn in events, reproduction in these animals is usually sexual with separate female and male forms. Kind of boring, really.

Nematodes play a tremendous role in the ecosystem. They're major players in the decomposition of dead organisms, which recycles nutrients back into the environment. Nematodes are also major pests for humans. They attack the roots of the plants we eat. Nematodes also parasitize humans. Some lovely examples include hookworm and Trichinella. Hookworm lives in the small intestines and lives off the host's blood. Trichinella, which starts in the intestine, burrows into the muscle and eventually into the heart.

To sum up this group:

Planaria are one kind of flatworm. They have light-sensing organs on their head called eyespots. It's a cute pet, for a worm.