The rest of the animal kingdom fits nicely into the next two big branches of the animal family tree: the protostomes and the deuterostomes. In this section, we'll cover one of the three protostome phyla: Mollusca. What's new in the protostomes? Their bodies have distinct sections, in addition to a head and complex organ systems.

All the animals we've discussed so far, as well as mollusks, annelids, and arthropods (discussed in this and the next sections), are invertebrates. They have no backbone. Spineless invertebrates. This distinguishes them from fish, reptiles, amphibians, birds, and mammals.

Mollusca is from the Latin word for "soft." Step on a clam or oyster shell at the beach and this may not seem obvious. Ouch. Mollusks are soft-bodied creatures, but most have a shell for protection. A few have internalized the shell or even lost it through further evolution.

Mollusks live in water. Familiar ones include clams, oysters, mussels, scallops, squid, octopi, and snails. Most species are marine, but a few live in freshwater, like the snails and slugs.

That's Not a Blob, It's a Body

Besides a shell, these animals all have a common body plan with a few basic parts: a foot, a visceral mass, a mantle, and a mantle cavity. The foot is one big muscular part on the bottom of the animal. The name gives it away; it is generally used for movement. The visceral mass has most of the organs and the head. ("Viscera" is Latin for "internal organs.") The mantle is the tissue above the visceral mass and it secretes the shell. There is a space under the mantle called the mantle cavity (that's an easy one at least). This space has gills for breathing and doubles as the end of the digestive system. 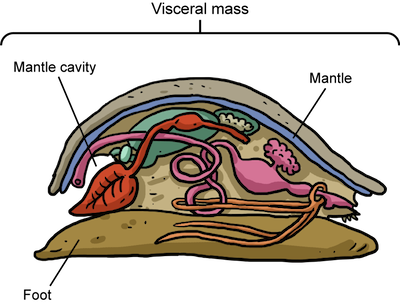 Mollusks have an open circulatory system. This means it has no blood vessels. Nada. Instead of flowing through vessels, fluid carrying food and oxygen moves around the visceral mass, which holds most of the internal organs. Each organ is floating in its food and oxygen source instead of having it delivered through vessels. Gills take oxygen from water, which then goes into the internal fluid. Wastes are filtered back out through the mantle cavity by organs that function like little kidneys.

It might be hard to tell sometimes, but mollusks usually have a head with a nervous system rattling around in there. Nerve cords run to key areas like the internal organs and the foot. The head has sensory organs: eyes to see and tentacles to sense chemicals and move.

They have a mouth, too. Mollusks eat by scraping. They use a radula, which is a long organ covered with little structures similar to teeth. The radula is pulled across a surface to remove anything edible. It isn't the most precise way to get food, but mollusks are apparently not very picky.

Mollusks reproduce sexually. Some species are hermaphrodites and some have separate genders. Most mollusks go through a few different forms as they grow, starting as little swimming larvae called trochophores that will eventually sink to the floor and morph into the adult form. Little squid and octopus, however, come out as miniature adults. Can you say, "adorable?"

Snails and slugs are examples of Gastropoda. Most live in the ocean, but some live in fresh water, or even on land. These mollusks sport either a single hard shell (versus the segmented plates of the chiton) or no shell at all, like slugs and nudibranchs (sea slugs). This is a very large and diverse phylum.

Gastropods are upside down, as compared to most animals. As a gastropod embryo develops, it goes through a process called torsion, where one side of the body grows faster than the other does. This causes the end of the gastropod to be above the head and the mantle cavity, which secretes the heavy shell, over the center of the body.

Familiar, tasty mollusks are from the class Bivalvia. Bivalve means "two shells." The animals of this phylum have a hinged, two-part shell and include clams, oysters, scallops, and mussels.

Bivalves are a bit of an exception to the cephalization that characterizes most mollusks. Bivalves don't have a head. They feed by filtering out food from the water in which they live. They actually eat with the same structure used for breathing: the gills. Tiny particles of food get caught in the gills and cilia near the gills move the particles into the mouth.

Bivalves generally sit still. They can move slowly using their muscular foot, which can be stuck out between the shells. They can also move by "flapping" their shells, like a startled Pac-Man. Most of the time, though, bivalves clam up. How convenient. Powerful muscles keep the shells together. Some bivalves even anchor themselves to something, including boats and other animals.

Polyplacophora are also called chitons. Chitons live in tidal areas of the ocean and eat by scraping algae off rocks. They are oval-shaped with a shell made of eight overlapping plates. They look a little like an oval, armored space ship.

Squids, octopi, cuttlefish, and nautiluses are mollusks in the class Cephalopoda, which means, "head feet." The tentacles (which are attached to the head…hence the name) are highly modified from the basic mollusk foot. They surround the mouth, which looks like a beak.

Cephalopods are the least mollusk-like of the mollusks. Their shell has been internalized or completely lost in all but the nautilus. Cephalopods also have a closed circulatory system. They have distinct heads, which hold the most complex brains of the invertebrates. Octopuses have been observed problem solving and even using tools. They use their tentacles to explore their environment and can make their way through human-constructed mazes.

Cephalopods are hunters—highly effective carnivores designed for capturing prey. They use tentacles for swimming and for moving along the ocean floor. The tentacles are covered with suckers on the bottom side. They're used to catch and pull prey into the octopus' beaked mouth (om nom nom and all that).

These aren't slow mollusks. Cephalopods can put on a big burst of speed by taking water into the mantle cavity and pushing it out for a little jet propulsion. They sort of spit themselves forward. Since they move so fast, it's good that they also have eyes and other sense organs that give them the ability to detect light and sound. Wasting time and energy slamming into rocks or the ground wouldn't exactly help their hunting prospects.

Cephalopods are tricked out like the Bat-mobile. Most have an ink sac and can shoot a cloud of ink to distract predators. They can also change color and texture in an instant, to match their surroundings. Being able to become the color and texture of the wall behind you in the blink of an eye is a great party trick. If discovered, you can always buy some time behind a blinding inky cloud.

Cephalopods have male and female forms and reproduce sexually. They lay eggs that are protected by the female until hatched. Many cephalopods live fast, short lives that end after reproducing.

Check out some facts about the octopus. Who says learning isn't hilarious?

Nudibranchs are hermaphroditic marine mollusks. One species was discovered to have a disposable penis.