Muscles and Nervous Systems and Organs, Oh My

This is the beginning of the rest of the animal kingdom, the eumetazoa, or "true animals" (we eumetazoans are a little biased). Eumetazoans have tissues that develop from the germ layers of the embryo, and there are two basic body styles that are defined by our symmetry, either radial or bilateral. Like the difference between a pumpkin and a human head. If you think about the shape of a pumpkin, there's a top and a bottom, but no left, right, back, or front. The middle bits are all the same. That's radial symmetry. A human head has a clearly defined left, right, back, and front. That's bilateral symmetry.

The two phyla with the radial body plan like a pumpkin are called the radiata, and they make up one branch of the eumetazoa. 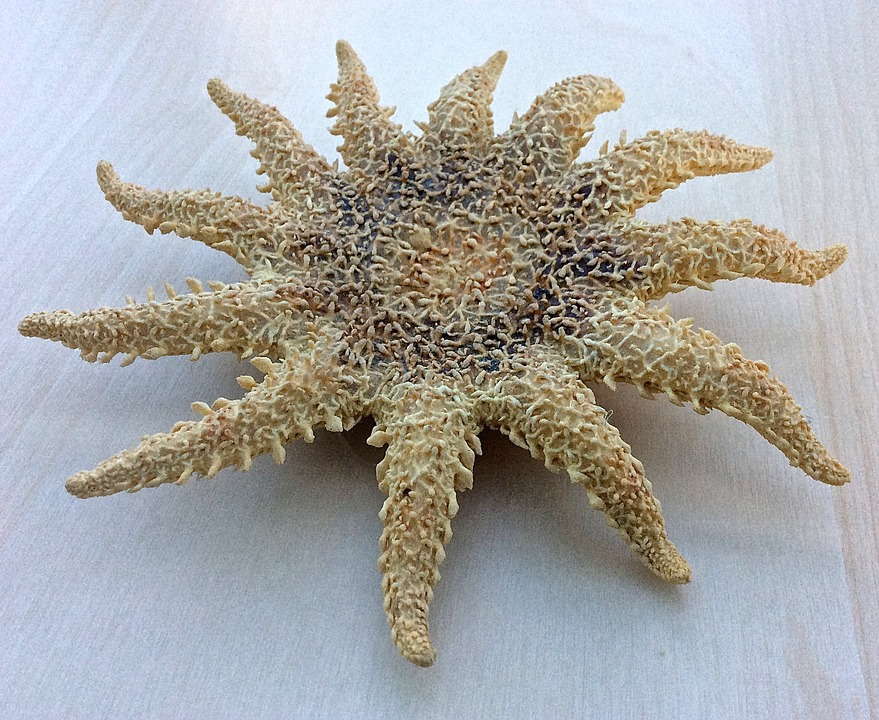 Sea stars and their radial symmetry. Image from here.

Eumetazoa have simple muscles and nerves that enable animals to move. Nerves conduct signals quickly and allow for fast responses and complex behavior. Muscles do the actual moving. While we wouldn't call a jellyfish quick, they can—unlike sponges—move a little under their own power.

Besides the radial body plan, the radiata differ from the rest of the eumetazoa in how the embryo develops. During gastrulation, an embryo begins to form germ layers that will become the different tissues of the adult body. In the radiata, only two germ layers form, meaning that the embryo is diploblastic. All other eumetazoa are triploblastic ("tripl" – triple and "blast" – budding).

There are two phyla in the radiata branch: Cnidaria and Ctenophora. (These words look scary, but the C's are silent).

The Cnidaria ("stinging creature") are hydras, jellyfish, sea anemones, and coral. These guys may be squishy, but they're not to be messed with. All have stinging cells called cnidocytes used to stun and capture prey, and for defense. Cnidarians are carnivorous, which means they eat other animals. Some Cnidarians also rely on more than their sting for protection. Corals and sea pens secrete calcium carbonate to form a rocky exterior.

The Cnidarian body is like a bag with one opening that leads to a digestive cavity. The opening is a mouth that is surrounded by tentacles, which is where the stinging cells are. (The shape sounds a little like a sponge, right? Sponges aren't symmetrical, though, and sponges have no tentacles or stinging cells. They also don't have a mouth.) There are two body types for cnidarians: the polyp and the medusa.

The polyp is shaped like a tube and is generally sessile. (Translation: it anchors somewhere so it can't wander off.) Cnidarians with a polyp body include sea anemones, coral, and hydra. The medusa is a free-swimming, reverse version of the polyp. The polyp is anchored with its mouth and tentacles facing up. The medusa is a flattened, more sack-like version, floating with its mouth down and tentacles hanging below. A jellyfish (or sea jelly, since it isn't really fish) is a medusa.

These animals have only two layers, between which is a squishy gel called mesoglea ("middle glue"). This is what puts the jelly in jellyfish. The mesoglea is a non-living substance secreted by the living cell layers.

Cnidarians can reproduce sexually or asexually. When it comes to reproduction, the oldest animal phyla have the most flexibility. Many cnidarians alternate between polyp and medusa forms during their life. Each stage has a different reproductive method: asexual in the polyp stage and sexual in the medusa stage. Most cnidarians are hermaphrodites (meaning they have both male and female reproductive organs), but some are individually male or female and participate in sexual reproduction. Some polyp forms reproduce asexually by budding, while some medusa can split down the middle.

Despite not having bones, these animals do move. Jellyfish mostly drift, but they can move on purpose if they need to. Our muscles pull on our bones to make us move. The muscles of a sea jelly, though, have a water-filled sack to pull on. The pressure of the fluid in the cavity inside the animal creates a surface on which muscles can act. Think of the difference between an empty balloon and one filled with water. This hard surface serves a similar purpose to our bones. This kind of framework is called a hydrostatic skeleton. Some sessile polyps can move too, very small distances.

Here's a hydra showing off its gymnastic skills.

Some cnidarians live in colonies. These colonies are made of polyps called zooids. Zooids may specialize for a certain function and therefore can't live on their own. Corals are colonial polyps, and the exoskeletons they secrete form the huge coral reefs that are famous for supporting a large range of ocean life. Only the top layer of the reef is living coral, which is attached to huge piles of old coral skeletons.

This Cnidarian looks like a medusa, but is actually bunch of polyps, so integrated that they can't exist independently. Plus, it's deadly.

The Ctenophora ("comb-bearers"), or comb jellies, are a group that look like jellies but have a couple differences. The comb jellies are named for the eight rows of plates they use to move around. These plates are made of cilia (Latin for "eyelashes"), which are like strings that extend from single cells and can be used for movement. The cilia in the combs work together so that the comb jelly can swim through the water. They generally move with the mouth end going first, but some can also go in reverse. Unlike sea jellies, comb jellies move in a specific direction, rather than just drifting through ocean currents.

Comb jellies look a bit like a transparent sack with a couple long whiskers. They have two tentacles, and the tentacles have special organs that help detect in what direction the animal is moving. The tentacles don't have stinging cells; rather, they have cells that are sticky and can latch on to prey. 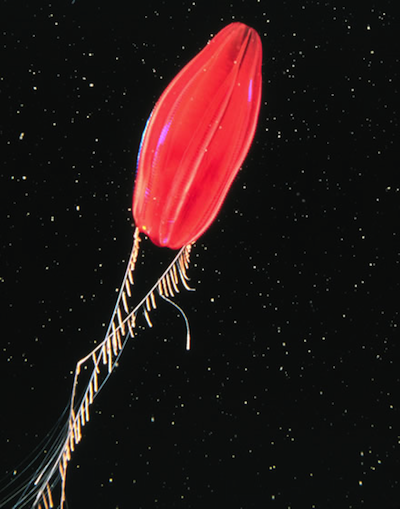 Comb jellies have one particularly spectacular talent, bioluminescence, which means they have chemicals in them that produce light. This makes them look like underwater spaceships, grappling and devouring unlucky abductees.

Check out the amazingly beautiful jellies at the Monterey Bay Aquarium exhibit, including jellies that glow.

What if regeneration is taken to the extreme? One recently discovered jelly might have the secret to immortality.