Animal Evolution and Diversity - What's In a Worm?

What's In a Worm?

Segmented worms like earthworms and leeches are found all over the place—from our compost to under the sea. Annelida means "little rings," which is how these worms look on the outside, like the bendy part of a straw. Annelids are the first branch of the family tree with a segmented body.

A Worm is Just a Bunch of Segments

The coelom of an annelid is divided into sections, separated by walls called septa (or "fence"). Each segment is called a metamere. The digestive system and circulatory system run through the whole length of the animal. The digestive system is one-way, end to end, and is the most complex one we've seen so far, with sections that have unique structures and purposes:

Blood is actively moved through a closed circulatory system by muscles that go around the vessels in the front part of the worm. The blood vessels and digestive tract go through the septa like straws through the lid of a cup. Wastes are filtered out of the blood and go out through pores in the surface of the worm. Annelids have special organs called nephridia to filter wastes from the blood for excretion. 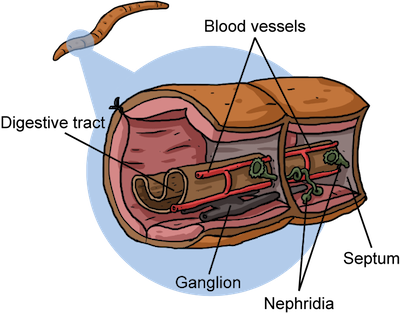 The land-dwelling annelids, like earthworms, breathe differently than freshwater and marine annelids. Water-dwelling annelids such as leeches have gills for getting oxygen from the water. The surface of a land-dwelling earthworm is covered with blood vessels that exchange gases with the air via water. This is why earthworms die when stranded on the sidewalk. They dry out and can't breathe.

Annelids can change the shape of each section separately, which helps them move. One section squeezes and then the next to wriggle the worm along. Annelid muscles work against the fluid-filled hydrostatic skeleton. Annelids often have some sort of bristles on the outside of their body called setae, which help them move. Some annelids also have parapodia ("beside feet" or "almost feet"). These are little parts that stick out from each section and act a bit like feet.

All annelids reproduce sexually, but some have separate sexes while others are hermaphrodites. They also all lay eggs. Life cycles are different, though, between land and marine annelids. (Different adaptations are needed on land than in water and we can see this within a phylum as well as between phyla.) Marine annelids go through two different stages in life: for example, a trochophore floats through the water and then changes into the adult form by adding segments. Land annelids produce young that are little versions of adults.

There are three classes of annelids:

Think leeches are disgusting? Well, you're right. But they must be pretty smart, because a leech has 32 brains. Leeches are made up of 32 segments, and each segment gets its very own brain.