Temperature regulation is, perhaps, the most variable and the most noticeable form of homeostasis. All enzymes have their happy place, and in their case, it happens to be a particular reading on the thermometer. If the body temperature goes outside of the acceptable range, the cells can’t perform their chemical reactions. Plus, if the cellular goo inside our cells freeze, we’re pretty sure that’s going to be bad.

Sensors in the blood vessels are constantly sending the brain updates on internal temperatures. This information gets sent to a part of the brain called the hypothalamus. The hypothalamus analyzes the data, then sends the animal a message to do something. Shiver, run around, get a Fanta, whatever it takes to cool down or heat up. 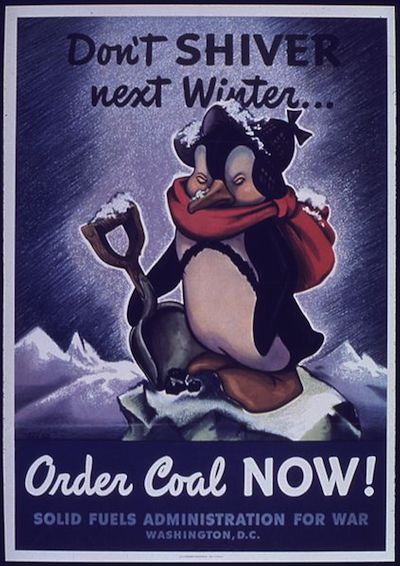 You’ve probably heard the phrases warm-blooded and cold-blooded before. Scientists don’t use those antiques anymore, since they led to a lot of confusion. The actual temperature of the animal's blood doesn’t really have anything to do with it. Now, the naming system is much more specific. It's also a little more complicated to understand. Don't worry; we've got you covered.

Animals can be divided into three categories, depending on how they regulate their temperature.

Homeotherms: animals who maintain a constant internal body temperature across a wide range of environmental conditions. Most mammals and birds are homeotherms.

Poikilotherms: animals whose temperature changes depending on the environmental temperature. Fish, amphibians, and reptiles are poikilotherms, as are most invertebrates. The only mammal known to be poikilothermic is the naked mole rat. But those things are just weird.

Heterotherms: animals which usually keep a constant body temperature, but have specific periods where their temperature is different, such as during hibernation. We said most mammals were homeotherms. The ones that aren’t (except for the naked mole rat) are heterotherms. Ground squirrels and bears are heterotherms, as are some birds and reptiles. 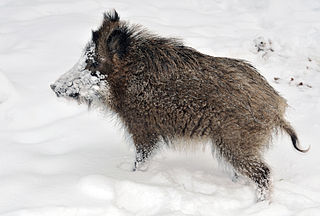 A wild boar in the snow. Boars are mammals and produce their own heat. To retain their heat and keep out the cold they also have special fur to insulate their bodies. Image from here.

Animals can also be divided by another classification system based on whether their heat primarily comes from an external source or an internal source.

Endotherms: Animals that create their own heat (mammals and birds).

These two systems overlap. Homeotherms and heterotherms can also usually be classified as endotherms, and poikilotherms can usually be classified as ectotherms. However, these rules aren’t always true. For example, there are deep sea fishes who are ectotherms and don’t produce their own heat, but since they live in a constant-temperature environment, they’re considered homeotherms. There are also insects that are poikilotherms with body temperatures that change with the environment. In order to fly, these bugs produce their own heat. Therefore, they aren’t true ectotherms.

The chief benefit for ectotherms is that they don’t have to expend too much energy generating their own heat. The downside is that they are at the mercy of their environmental temperature, and their cells must be able to function over a wide range of internal temperatures.

Endotherms, on the other hand, benefit from staying at a constant optimal temperature. This allows all of their enzymes can work at full efficiency all of the time. They are also capable of withstanding extreme temperatures for a short time without a serious detrimental effect. It's why people can do the polar bear plunge. Unfortunately, though, they need to spend a great deal of energy on temperature regulation.

Since ectotherms don’t produce their own heat, they have to regulate their temperature in other ways. The circulatory system plays a big role in temperature regulation. The blood gets everywhere in the body, so if the blood is nice and warm, it’ll keep the cells cozy. For this reason, ectotherms have their blood vessels close to the skin for quick heat exchange, and they usually don’t have hair or feathers. Those things just get in the way.

Most heat exchange occurs in an animal's extremities, such as its feet or tail. When it’s cold, they can restrict blood flow to those regions and concentrate on keeping the vital organs warm. The opposite is true too. If the body is too warm, sending the blood to the toes can let off some steam.

Fish can conserve heat using something called a counter-current heat exchanger. Sounds like something they bought at Best Buy. The blood circulates past the gills for gas exchange, but that also means that blood is pretty close to all that cold water. 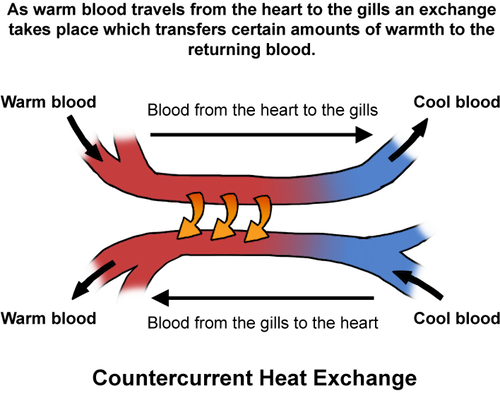 To retain heat, the blood vessel going to the gills run parallel and opposite to vessels returning from the gills. Warm blood goes towards the gills and passes cool blood that’s heading for the body. The heat from the warm blood transfers to the cool blood and the fish is left with lukewarm blood.

Countercurrent heat exchange can also be found in the legs of the arctic fox, so that heat is not lost when the warm blood passes through the cold paws.

Another way for ectotherms to regulate their temperature is by just changing their behavior. If a lizard is cold, it just hangs out on a sunny rock. If it's too warm, it can move over to the shady rock. Pretty simple system. 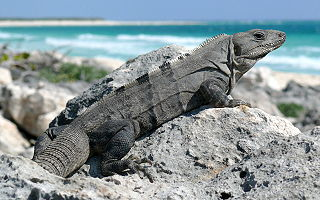 An iguana sunning itself on a warm rock to get warm. Image from here.

Iguanas are known to feed in the cold seawater. Then they find a hot rock to lie on for digestion. The enzymes required for digestion can’t function at cold temperatures, so iguanas have learned that they must seek out warmth in order to digest their food.

There are many other examples of ectotherms adapting their behavior to conserve, receive, or lose heat. Fish dive to cooler waters when they get too warm. Snakes dive into holes on hot days. Butterflies and other insects sun their wings to warm up their flying muscles.

Both cars and ectotherms need to prepare for winter by filling up with antifreeze, or in science language, cryoprotectants. A cryoprotectant is something that prevents things from freezing. Although it is not directly involved in temperature regulation, it can prevent some of the effects that extremely low temperatures can cause. Ectotherms that live in extreme climates go on an extreme binge of particular carbs and amino acids before winter to protect their cells from freezing. One of those carbohydrates, propylene glycol, is actually the same chemical used in automotive antifreeze.

Endotherms can exhibit many of the behavioral changes for temperature regulation as ectotherms. Pigs, for example, are notorious for soaking in a pile of cool mud on a hot day. While we all like to sit by the fire on a cold day, we endotherms can also create our own heat through metabolism. For this reason, endotherms need to consume more food than ectotherms, and the metabolic rate for an endotherm is a lot faster than a similarly sized ectoderm. 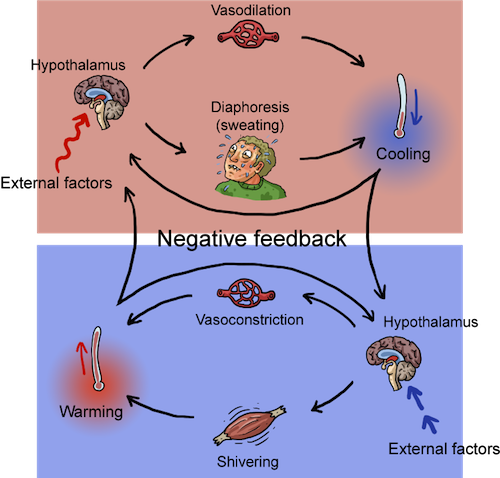 The cycle of temperature regulation in endotherms.

Endotherms use blood vessel constriction or dilation to regulate their temperature. Since we spend all this energy creating heat from within, we’re pretty keen on conserving it. That’s one reason endotherms have hair and feathers: to keep the body heat in and the environmental heat out. Instead of hair, marine mammals have a layer of blubber that keeps them snug in frigid ocean water.

Polar bears and other arctic species have several layers of fur to keep the harsh winds off of their skin. They also can contract the hair follicles to make the hair stand on end. This is called piloerection, and most mammals can do it (even you). Piloerection can be used to make an animal look bigger (think of a cat with its hair all up), but it has a temperature regulation function too. Fluffing up your fur or your feathers allows warm air to become trapped close to the skin.

Shivering is another way we can produce body heat. Shivering is caused by tiny muscle contractions, and those contractions create heat; it’s also what causes teeth to chatter together. Despite his snowsuit, this pug is still shivering to stay warm.

Some endotherms are heterotherms who sustain periods of lowered body temperature. In the winter, we call this hibernation. In the summer, it’s estivation. Yes, there are animals that sleep through the summer. Tragic, we know.

In preparation for dormancy, animals eat large amounts of food and store it as fat in order to sustain their low metabolism through the off season. Hibernating ground squirrels allow their body temperature to drop to environmental levels. They then remain in a deep slumber, unable to be roused until the spring. Bears, on the other hand, keep their body temperatures at a moderate level, and are able to be roused without much difficulty. Although waking a sleeping bear is NOT recommended.

What happens when a bird forgets to migrate?