When the oviparous embryo is fully developed, it will hatch from its egg into the environment. Usually, it is time to hatch when the animal has used up all of its nutrition, oxygen, or space. Then, it pushes its way out of the egg. Some animals with tough shells have a special egg tooth that helps them to break out. The egg tooth isn't really even a tooth. It is hard deposit, usually on the beak that usually falls off shortly after hatching. 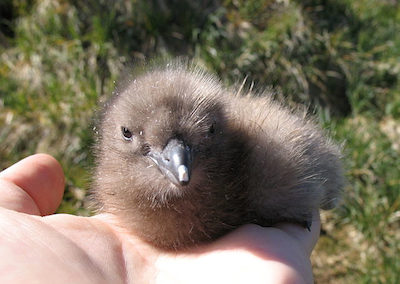 A baby Skua. The white hard spot on top of the beak is an egg tooth. Image from

Remember, a cozy egg can be protective, but it's also a sitting duck for predators. The Beach Boys taught us about good vibrations, but the red-eyed tree frog can teach us about bad vibrations. Researchers have shown that tree frog eggs will hatch early if vibrations indicate a snake is nearby.

Viviparous birth is a difficult process for mother and offspring, called labor. There are probably many mothers who wish that a stork would just deliver the baby in a basket. Here are the basic steps for most mammals: 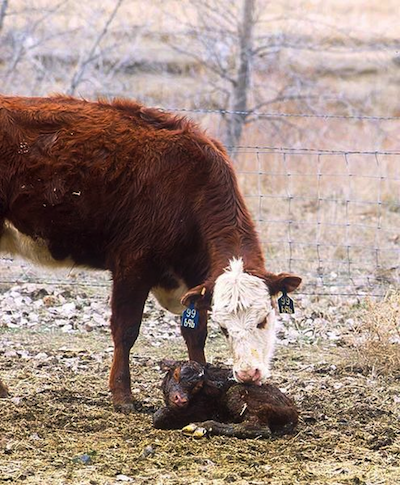 There are advantages and disadvantages to having few or many offspring. Remember, the goal is to pass on genes and ensure that the offspring survive. Animals try to accomplish that goal in different ways and there is no clear winner.

Some animals have as many offspring as possible and hope that some will survive. Animals that produce many offspring tend to be more "hands off." Take, for instance, the ocean sunfish. It can produce 300 million eggs at one time. Wowzers. If she spent 5 minutes meeting each child, it would take 2853 years to meet all of their children. Don't get us started on college tuition…

Other animals choose to have fewer offspring, but they are able to devote some time to nurturing them in hopes of increasing their chance at survival. Elephants have very few babies, and they are raised under strict supervision with aunties and grandmothers until they are several years old.

Animals Care for Their Offspring in Different Ways

Different animals are born at varying stages of development. Some require extensive parental care. Some are pretty much all grown up as soon as they are born. They can walk, talk, and even balance their checkbooks from Day 1.

The award for least developed at birth goes to marsupials. They give birth to preposterously undeveloped offspring. Sure, the offspring develop a lot more in their mom's pouch, but they are still out in the world briefly at a very early stage of development. Check out this video of a baby kangaroo.

The award for most developed goes to the many species of baby fish and reptiles that are born almost fully developed. This is because mom lays the eggs and sometimes never comes back. The young better be able to survive on their own.

Most animals are born somewhere in between and still have a little developing left to do. Some of this is learning and must be taught over time. Some of it is developing physically, which takes time and nutrition.

In mammals, a mother's milk is an important form of nutrition. All mammals lactate, and nursing is often an important bonding moment between mother and young. At some point, the offspring get too large to be stealing mom's energy. She has to break the bond and wean them onto another food source. 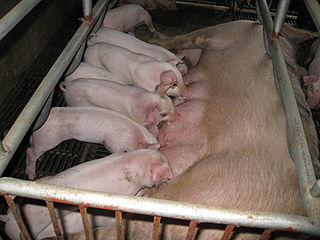 A young Miss Piggy at her first buffet. Image from here.

Apart from nutrition, many baby animals need lots of caring and protection. Mother cats and dogs carry their young around in their mouths to keep them out of trouble. Mother gorillas carry their young for 24 hours a day and never put them down. Here is a list of great ways that mothers care for their offspring.

Let's not forget the fathers of the year. Although the mother is often more involved with the offspring, fathers can play an important role as well. In fact, the Dayak bat father even lactates and nurses the young. In red foxes, the males do all the hunting and bring food to the den where the female and the young pups are staying warm. Tamarin fathers (and adoptive fathers) also help out by carrying the young around when mom gets tired.

Many birds imprint on the first living thing that they see or the first thing that takes care of them. Usually, this is the mother bird. However, sometimes the mother is not around and another animal or a person becomes the "mother" like in the picture below.

(Left) This (not so darling) starling is so young that it doesn't have all of its feathers, but it has already imprinted on the human who rescued it. (Right) All grown-up and they are still BFFs.

If the offspring are lucky enough to survive, they will most likely feel the same pull to reproduce that their parents did. Their so-called biological clocks will tick-tock and they will feel the urge to pass along their genes.

Sometimes an animal is born capable of reproducing, and sometimes they have to undergo further development in a stage of life called puberty. For example, the Galapagos tortoise does not become sexually mature until it is 40 years old. In their society, it is completely normal to be a 40-year old virgin.

Some animals have to change a lot during development. Butterflies, for example, begin as tiny caterpillars. They have to develop into a butterfly during a special cocoon phase before they can reproduce. The sexual maturation of an animal is actually the first phase of successful animal reproduction, and the cycle continues.

Congratulations. Now you are experts in animal reproduction! Pop quiz time: do you know what a baby fish is called? Do you know what animal an elver or an eyas grows up to be? Just kidding, we mention all those names, but you should check out this list for some baby animal names to share around the dinner table.

Many mammals eat their placenta after they give birth. Some people believe this is to hide the presence of a birth and protect the young. Others think it provides nutrition to the weakened mother and can help with lactation. Some humans believe in eating their placentas for nutritional and hormonal benefits.