Creating gametes is just the beginning of sexual reproduction. Gametes are useless without their counterparts. The process of finding and wooing a suitable partner to share gametes with is called courtship.

Courtship requires time and energy and causes animals to do things they would not otherwise do. Often, this behavior leaves observers scratching their heads and thinking "what on Earth are they doing?" To whet your appetite, read here about some weird courtship behaviors.

In this section we will answer some key questions about courtship:

Some species have to travel a long way to reproduce. They often travel every year to a special breeding ground to mate. For example, Pacific salmon travel all the way to the place of their birth to spawn. This means that they have to leave the salty ocean and travel upriver in freshwater. Sometimes, they even have to travel up a waterfall. 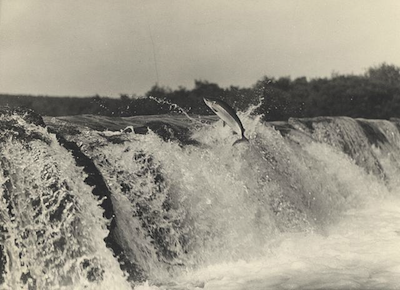 Salmon with a vertical leap three times its body length. Image from here.

Many species of birds return to the same place to nest every year. The place that they breed at is usually the right temperature and with the right resources. It might have great materials for building a nest or perhaps it has a good food source. The great tit bird travels to the same place each year when local caterpillars are hatching and uses them to feed its young. Said the caterpillar: "Not again!"

Once in a Lifetime

Different species of animals have different timelines for reproducing. Some species will only reproduce once in their lifetime. This is called semelparity or "big-bang" reproduction. They reproduce and then they…die.

They use pretty much all of their energy on making their gametes. Many types of insects and spiders reproduce this way, (SPOILER ALERT, remember Charlotte's Web?). Since they use so much energy on the production of gametes, they usually produce quite a bunch. Here are some videos about semelparous animals.

Many Times in a Lifetime

Other animals practice iteroparity, which means they can reproduce more than one time during their lives. Since it is not a kamikaze mission, they cannot use as much energy on gamete production each time. Instead, they can make up for it by helping their offspring to survive or by reproducing multiple times (if they live that long).

Courtship: When? (Now is Not a Good Time)

Although iteroparous animals can reproduce more than once in their lifetimes, it does not mean that they are always capable of reproduction. As mentioned, egg production is controlled by hormones. These hormones are often highly cyclical, resulting in something called the estrous cycle in mammals.

Different animals have different lengths of estrus cycles. If a female is fertile (an egg is available for fertilization), she is called "in estrus" or sometimes called "in-heat." Some animals, like bears, go into estrus once a year. Other animals, like dogs, can go into heat twice a year. Horses can have multiple estrus cycles in a year, but only during the spring and summer. Other animals, like rabbits, are always in estrus. This is what started the radical rabbit replication reputation.

Humans and apes have a hormonal menstrual cycle instead of an estrous cycle. Their egg production is still controlled by a hormone cycle. The difference is that if there is no egg implanted then they shed their uterine lining. It comes loose and flows right out of their bodies whether they want it to or not. Other placental mammals just reabsorb their uterine lining on the inside.

Fish, amphibians, and many other animals do not reproduce strictly on a hormonal schedule. Instead, many other things determine when they mate. For example, some types of fish only spawn during some phases of the moon. Yeah, werefish! Kidding, the phase of the moon affects the tides. Others prefer water with a certain temperature or a certain pH. These conditions favor development and/or survival of the offspring. By only spawning when the temperature is just right, fish are ensuring that their fish babies don’t freeze or overheat.

Many animals have developed elaborate communication schemes so that potential sexual partners can make their intentions and desires known. These communications are called courtship rituals and can be a fancy flirty dance, a waggle of a tail, or a feat of strength. Many sexual dimorphisms (differences between the male and the female) are because of the different roles that the males and females play in courtship.

Consider this: sometimes the males and females do not interact except for during reproduction. This means it is important to have a clear system in place to make sure everyone is on the same page. It must be confusing to not know if someone wants to kill you or be your mate.

In fact, male spiders are often much smaller than the females and look like a tasty snack. They have developed a special web vibration signal to let the female know what their intentions are. They want to share a romantic dinner, not be a romantic dinner. Sometimes they end up as dinner anyway.

Some types of animals release chemical compounds called pheromones that are sent out into the air like a tweet saying "I am available to be courted." Other animals, like the hippo, spray females with feces and urine to announce their intentions. Giraffes even lower their long regal necks just to sniff each other's urine to determine if the female is in estrus. 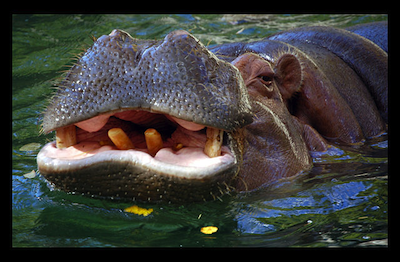 Hippo logic: why woo with flowers when body wastes will do the trick? Image from here.

Often, males and females play very different roles in the courtship process. It is thought that the process of gamete formation directly relates to how selective an animal is when choosing a mate. For example, females often have a finite number of eggs, which take a lot of energy to make. It would be bad for them to waste any of them on a mate who won’t provide good quality sperm. In many species, the females are choosy.

Males, on the other hand, have infinite numbers of sperm. They can spread it around as much as possible without running out. In addition, males are continuously producing sperm whereas females are often on a cycle of gamete production. This leads males of some species to be continuously seeking mates. It is like a continuous episode of The Dating Game.

The same type of logic applies to time and investment in the offspring. A highly involved parent will be more selective in choosing a mate because they do not want to waste time on an unfit offspring. If a parent is not involved then they will be less choosy because they won't have to deal with their disappointing offspring.

Intersexual selection occurs when the decision to mate is made because of interactions between males and females. One sex (usually the female) is the choosier sex. Suitors must prove that they are worthy. They will show off in a variety of strange ways to get the attention of a partner.

Animals think the strangest traits are sexy. Birds in particular have some odd rituals. Some birds have elaborate mating dances or songs. Others collect seashells and garbage to make a swanky love nest. Another specifically likes blue feet, and we mean really blue feet. The ladies cannot get enough of these webbed blue feet. Female peacocks (peahens) even like the look of a long lush heavy tail.

No matter what the fetish is, one animal is usually doing their best to get a stamp of approval from their chosen mate. If he or she agrees, then the game is on and they will move on to the actual act of mating. Giddy-up.

Intrasexual selection is different because the mating decision is based on male versus male interactions (or females versus other females). One sex competes directly against each other while the other plays the role of the prize. In many such situations this means that males compete over mating rights to one or many females.

This is particularly famous with elephant seals. These animals compete using brawn and teeth to win the right to mate with an entire beach of females. Elk courtship is similar. The males compete by crashing antlers together. The winner gets the right to mate with the entire herd. Less violent but equally important is the neck measuring contest in Galapagos tortoises to win a single mate. Sculpin fish don't compete for mates directly. Instead, they defend premier breeding caves which will increase their chances of getting a mate's attention. 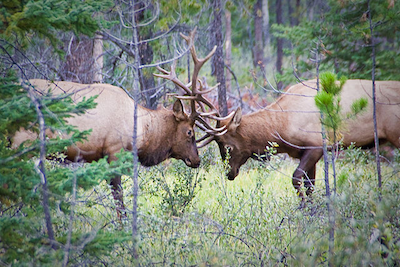 I said back off buddy. Can’t you see the lady’s spoken for? Image from here.

Endangered panda bears are notorious for having mating trouble in captivity. Then, zookeepers got a little creative: panda pornography. The video seemed to spark a courtship and mating between the panda bears.