Once the gametes have successfully fused, the embryo can begin to develop. The length of time that it takes to develop depends on the animal. Some small fish can develop in a couple of days. Other animals like birds and mammals take longer. The elephant has the longest development time of 22 months. That’s a long time to carry around an elephant. To fully understand the early development of the offspring we will discuss:

Where Does Development Occur?

Oviparous animals are egg-layers. Now, when we say egg, we are not talking about the single-celled gamete anymore. We are talking about the larger egg that contains a developing embryo. The egg contains stores of nutrition that give the embryo energy. Egg size can vary greatly and the largest egg is the ostrich egg. Surprisingly, ostrich eggs are the smallest egg relative to the size of the adult bird.

Most fish, amphibians, birds, and reptiles are oviparous. They develop in eggs outside of the mother. A few mammals are also oviparous. These mammals are called monotremes and their most famous member is the duck-billed platypus.

Ovoviviparous animals develop in eggs, but the eggs develop inside the mother or the father. These animals get their nutrition from the egg, not from the mother. Remember the cichlid mouth brooders collecting the eggs? This a cichlid with hatching eggs. Seahorses and some sharks are ovoviviparous. The young are born live after their eggs hatch inside the parent. Check out these ovovivideos.

Viviparous animals are live born. Their embryos develop inside a parent, and they receive nutrition directly from the mother. In mammals, the embryo implants in the wall of the uterus. During the estrous and menstrual cycles this endometrial lining is prepared fresh every time an egg is produced. The length of time it takes for mammals to develop inside the mother is called gestation. 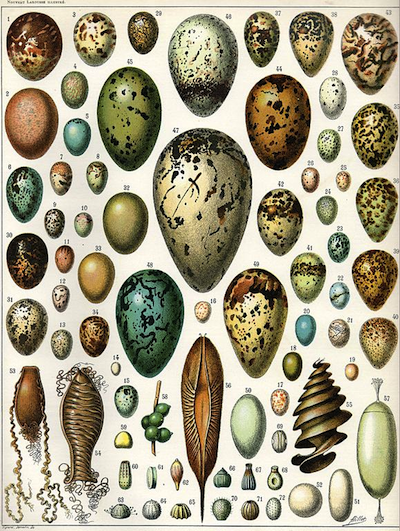 Collection of different eggs. A list of numbered species can be found here.

How Does the Embryo Get Its Nutrition?

Most fish and amphibians are anamniotes, meaning their eggs develop in the water with only a single embryonic membrane. They can exchange gas and waste directly from the environment by diffusion.

Birds and reptiles are amniotes, meaning they have a more complex egg structure. Since their eggs develop on land, they need some special modifications. Their eggs have a protective shell in addition to the embryonic membrane. The shell does not form until after the egg has been fertilized. It is usually a hard shell, but some reptiles have soft leathery shells. The protective shell allows embryos to develop in a wet environment without actually being in the water. This barrier also means that amniotes also need to have specialized membranes to allow gas and waste exchange through their shell:

Allantois: Helps with gas exchange and handling of liquid waste

Chorion: Located just beneath the shell, surrounds the allantois and amnion 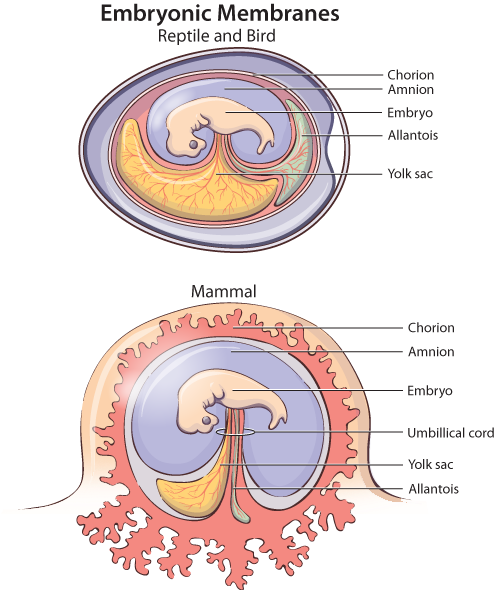 Embryonic membranes in the amniotes: reptile and bird and mammal.

Mammals are also amniotes, but since mammals (except monotremes) are viviparous they get their nutrition and gas exchange from their mother instead. Mammals have a special structure called a placenta that is formed together with the chorion and acts as a go-between for the mother and embryo. The placenta is attached to the embryo with the umbilical cord. The entire structure develops in a tough thick walled organ called the uterus. The uterus must be tough to protect a developing baby from the outside. It also must protect the mother from the developing baby. We hear they can really kick.

Marsupials are a special class of non-placental mammals. They have internal fertilization, but their young only partially develop internally. They are born very undeveloped (ridiculously undeveloped), and they spend the second part of development in a pouch on their mothers. Kangaroos are the most famous marsupial.

Caring for the Developing Embryo

Oviparous animals sometimes spend a lot of time caring for their eggs. Check out this list of egg incubation times. Of course, some animals lay their eggs and never return, but plenty of them are never far away. Birds and reptiles often sit on a brood of eggs to keep them warm and protected. They also sometimes patrol the area and stand guard over the nest. If you ever wander too close to a Canada Goose's nest you will learn just how protective they can be.

Luckily, the responsibilities don't always fall on the mother. The female typically takes on the role of nesting, but not always. In seahorses, the male is the one who carries the eggs and gives birth. In Emperor penguins, the males incubate the egg for nearly two months at a time with no breaks and no food. In rheas (a large flightless bird), the males incubate the eggs and raise the young.

In viviparous animals, the female is the primary caregiver and incubator for the developing young. Her job is to stay healthy and provide the offspring with good nutrition. It might seem easier than guarding a nest all of the time, but just ask a pregnant mother how easy it is. Check out this list of mammalian gestation times.

All embryos begin as a single-celled zygote that has been formed by the fusion of the gametes. This cell then splits into 2-cells, 4-cells, 8-cells, etc. When the cell reaches about 32 cells it starts to resemble a mulberry, and is called a morula. The morula continues to divide, and is soon no longer a solid clump of cells. It is now a hollow ball called a blastocyst or a blastula with 70-100 cells. 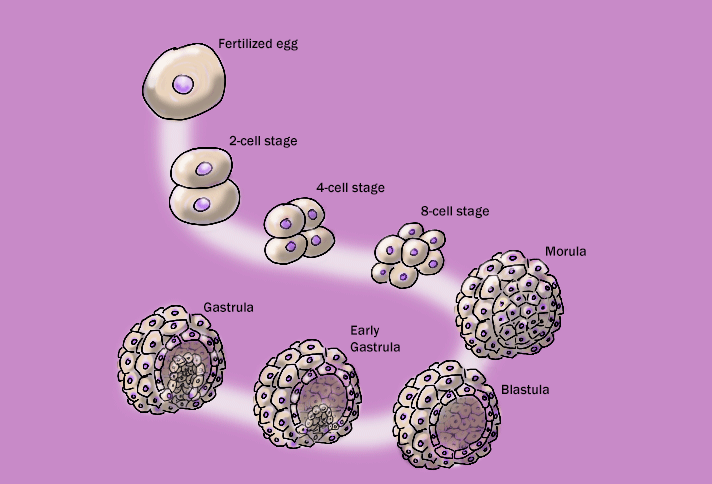 At this point, the cells begin to differentiate, which means that not all cells are identical. As they differentiate, they form a ball of different types of cells called a gastrula during a process called gastrulation (real clever name, right?).

Gastrulation is different amongst different animals, but the process starts when an outer layer of the blastocyst invaginates (or folds in). From here, there is cell movement and development of an area called the primitive streak. Just like a person is never the same after they go streaking, the cells will not be the same after the primitive streak. It sets the organization up for the rest of development.

By the end of gastrulation there are three different germ layers created. Each layer will give rise to different types of tissue in the animal:

At some point, the fetus is no longer called an embryo and is called a fetus. Many people say it becomes a fetus when the hearts begins to beat.

At the appropriate point in development, important developmental genes turn on. They tell the mesoderm cells in a certain area to start proliferating. This then causes the ectoderm cells to bulge out and to form a limb bud, which is the beginning of a limb. This bud expands and eventually cells between the "digits" die so that only fingers or toes are left. 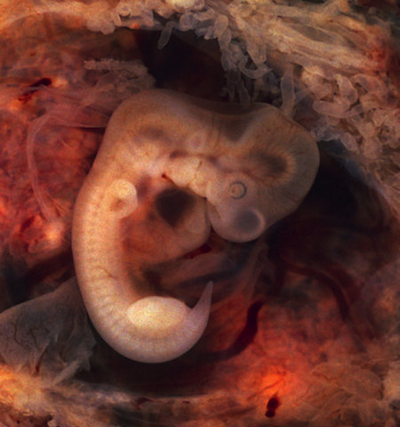 Scientists have recently recreated the genome of an ovoviviparous frog that carries its eggs in its stomach and then gives birth out of its mouth. It is extinct, but they might resurrect it, a la Jurassic Park style. Check out the story here.