From here on, we're going to focus on the world of sexual reproduction. To do that, we'll discuss its star players: the gametes. Gametes are the haploid sex cells, fondly referred to as sperm and eggs, which combine during fertilization to kick-off the formation of a new organism. The production of gametes is the first step of sexual reproduction.

An important part of gamete production is meiosis. In this process, diploid cells get the karate chop to turn them into haploid cells. Although sperm and egg production differ in many ways, meiosis is critical to both processes. The basic process of meiosis is described a little bit in another Shmoop guide, but we will give you a quick rundown again right here because it's an important part of gamete formation.

Meiosis begins with a regular diploid cell. Remember, diploid means two full "sets" of chromosomes. We'll use the cell in the image below as an example. The parent cell has two sets of chromosomes (2n). In an oversimplified nutshell, here's what happens. 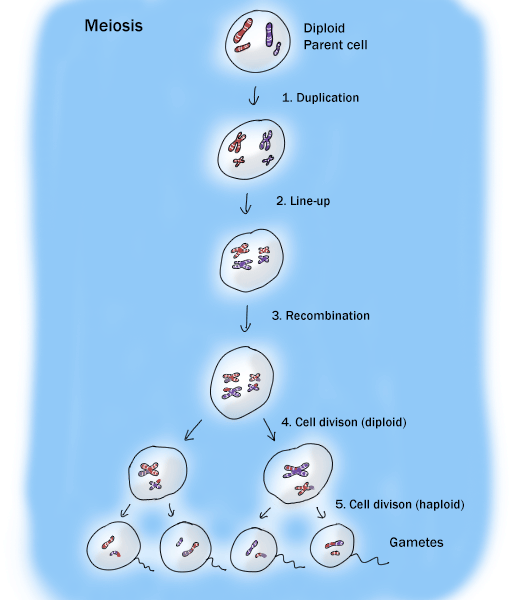 We've already learned that sexual reproduction leads to greater genetic diversity, because the offspring have a genome that's a combination of genes from two parents. Meiosis is key to this increase in diversity, because each parent produces a variety of gametes. After all, if every gamete from a parent were the same, then all siblings would be identical twins.

Gametes are governed by a couple of laws:

During meiosis, bits of DNA are swapped between chromosomes in a process called recombination. This means that the resulting chromosomes are unique, and are no longer just like mom or just like dad. Now they're more like mofather and famother hybrids. This is important because it helps genes to get switched around so that all offspring are completely unique.

Larry's parents united their gametes and produced a Larry, who expresses a combination of both of their genes. When Larry produces gametes of his own, those gametes are going to recombine his genes into new combinations that never before existed. If there was no recombination during meiosis then the brown eyes allele (from his dad) and giant nose allele (from his mom) would be permanently located on separate versions of his chromosomes. If they're never on the same chromosome, then they can't ever be in the same gamete (since each gamete only gets one copy of each chromosome). Larry's children would never inherit his brown eyes and giant nose.

Luckily, recombination means that the brown eyes and the green eyes could swap position and create a chromosome with both brown eyes and a giant nose. Recombination is what makes it possible for Larry's offspring to have a mix of Larry's genes. Of course, when Larry meets Larry-Etta and their gametes fuse, there will be another set of genes thrown into the mix, which might overshadow that giant schnoz.

The gamete cells produced by males are called spermatozoa, or sperm for short (we tried to call them "tozoa" instead, but it never caught on). The process by which sperm are produced is called spermatogenesis. The headquarters for sperm production are the testicles or testes. 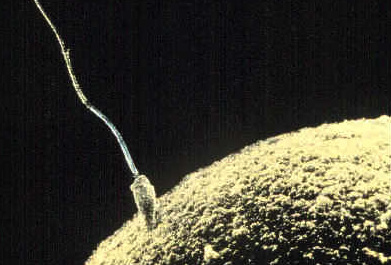 Behold, sperm, the male gamete. Each sperm is about 50 micrometers from head to tail. To put that into perspective, a human hair is about 100 micrometers in diameter. Image from here.

The cells that want to be gametes when they grow up are called germ cells. The germ cells for males are called spermatogonia and they're located in the seminiferous tubules. These germ cells can either 1) undergo mitosis to create more spermatogonia, or 2) they can undergo meiosis and develop into gametes.

Towards the end of development, sperm grow a small tail or flagellum for swimming. They also develop a sac on their heads called an acrosome that contains special enzymes to eat through the egg's wall. Tasty. At the appropriate moment, the sperm are ejaculated from the body. They are immersed in a combination of helpful liquids that provide nutrition and structural support to help them on their quest to fertilize an egg. It's like the Fellowship of the Sperm.

Most animals don't begin spermatogenesis until puberty, and after that point sperm production is a continuous event throughout the course of a male's life. The testes might get bored, but they have no choice. Sperm production is controlled by hormones. Special testosterone-producing Leydig cells in the testes are stimulated by hormones signals sent from the brain and pituitary gland.

The length of time to complete spermatogenesis differs between animals, but in mammals it's between 30–78 days. In humans, it takes approximately 74 days from start to finish. This means that spermatogonia that start meiosis today might be fertilizing an egg 74 days from now.

The female gamete is called an oocyte, or egg. The process of egg production is called oogenesis. Oogenesis occurs in the ovaries, which are the female equivalent of the testes. Ooooh boy, that's a lot of o's.

Oogenesis varies greatly between animals. Some animals produce a single egg at a time, while others produce millions of eggs at a time. We'll describe oogenesis as it occurs in most mammals and then talk about other animals.

When a female mammal is born, her ovaries are filled with a finite number (this means a set-in-stone, limited number) of small sacs called follicles. Each follicle contains a single primary oocyte. These primary oocytes are diploid cells that began meiosis before birth. 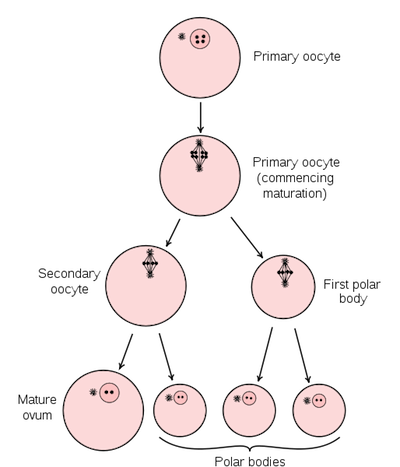 The process of oogenesis. Image from here.

Primary oocytes wait ever so patiently in the beginning stage of meiosis for the right time to complete the process, and that right time is called puberty. During puberty, certain hormones tell them to wake up and start dividing. A primary oocyte then undergoes the first split of meiosis.

Oocytes don't split equally. Instead, one large cell and one teensy tiny cell form. The tiny cell is called a polar body (first polar body in the image above), which serves as a chromosome dump. It allows the egg to get rid of the excess genetic material without splitting the nutrient rich cytoplasm it needs for development. The polar body may divide by meiosis again, but these polar bodies deteriorate over time. The remaining large cell is called a secondary oocyte.

Secondary oocytes are released from the ovary during ovulation with a dream of being fertilized. If they do meet a handsome sperm, then they quickly undergo the second meiotic division. It's an uneven split again, and another polar body forms. This means there are now two polar bodies (or three if the first polar body underwent the second split of meiosis).

Oogenesis in Other Animals

This process can be slightly different in other animals:

Sperm are typically produced by males, and eggs are traditionally produced by females, but that isn't always the case. There are animals that can produce both types of gametes. These animals are called hermaphrodites.

Some hermaphrodites can always produce both gametes, and they play both the male and the female roles at the same time. Snails, slugs, and earthworms fit into this category. Self-fertilization can occur in some of these species, although mating with a partner is still common (and beneficial to promote genetic diversity). This can lead to either one or both partners becoming fertilized. Talk about a brother from another mother/father.

Other types of hermaphrodites are born either male or female, but they can switch sexes later in life. Many species of fish, including clownfish, can do this. Apparently, dinosaurs at Jurassic Park can do this too. The change often occurs to maintain a social dynamic that is dependent upon a set proportion of males and females. 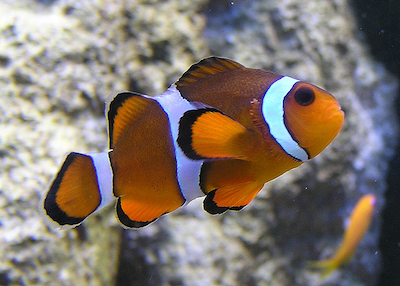 Hermaphroditic clownfish. If Nemo's father had waited awhile, he could have been a female clownfish instead. Image from here.

Gametes are a delicacy in many cultures. Humans and other animals eat a lot of eggs: turtle eggs, fish eggs, chicken eggs, etc. Since chickens lay their eggs whether they're fertilized or not, most of the chicken eggs eaten by humans are unfertilized. Most of them…