What is biogeography? The International Biogeography Society says it promotes "the study of patterns and processes in the geography of nature," which means….uh…nature and geography. That's like, Google Earth, right?

Let's break it down so it makes more sense. Bio means "life," geo means "Earth," and "graphy" means a descriptive science. Put it back together and biogeography means a descriptive science about life on Earth. Basically, it's where stuff lives and why. Biogeography looks at the distribution of organisms around Earth, and through time. You might not be a winner of the National Geography Bee, but you can still understand (and be good at) biogeography.

Biogeography is similar to ecology because it explores the relationship between biota, or living organisms, and abiotic factors, aka the non-living environment. Like geography, it takes into account the physical factors that make a place what it is. Wind, water, temperature and soil are all abiotic factors that influence where living things can exist.

Biogeography tells us why lemurs only live in Madagascar, and why penguins live at the South Pole, but not the North Pole. It deals with the history of the continents, the changing climate of those elusive continents, and how it all shaped life on Earth. 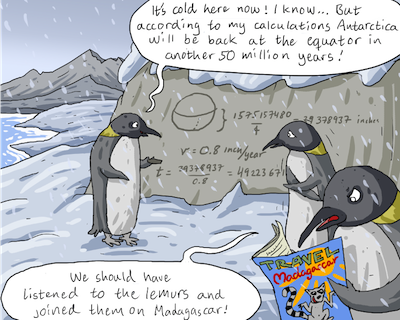 NASA Knows Biomes
From NASA, play games to learn your biomes. Caution: Might be a little hokey.

Turtles, Anyone?
Read more about Galapagos biodiversity from the Galapagos conservancy.

Cal Also Knows Biomes
More about biomes from the University of California Museum of Paleontology.

Global Warming: Winners and Losers
Here's a National Geographic slideshow about winners and losers among animals in the fight against changing climate.

Viruses Like Biogeography, Too
We talked mostly about plants and animals here, but the biogeography of viruses is interesting, too. And deadly.

Cold Weather Crustaceans
Check out how these Arctic crustaceans are getting by without ice.

Science Friday Talks Tree Rings
Tree rings can tell us about fires that happened in the past, and how climate has changed over time. Hear about it from Science Friday.

Next
More on Biogeography Navigation