Non-living. Rocks, wind and smoke are not living, despite what you may have seen on Lost.

The geographical distribution of organisms over the surface of the earth. Biogeographers are interested in where things live, and why they live there.

Any of the Earth's major habitats. These include tropical rainforests, tundra, deserts and temperate grasslands.

Living things. Anything that is living is "biotic" and anything non-living, such as rocks, is "abiotic." We can talk about biota in general, but when people use the term "biota" they usually are talking about the living things in a particular area, such as desert biota or rainforest biota. As far as we know, the biota of Mars is non-existent.

Long-term patterns of temperature and precipitation. While you may have heard of the "political climate," here we are just talking about things that happen in the atmosphere. Climate is different than weather. Weather refers to short-term events, like ,"It's raining today." Climate refers to weather patterns over many years, like nine feet of rainfall each year in the Amazon rainforest.

The deflection of winds at the equator. As the Earth turns to the east, the path of air (or water) moving toward the equator curves west. This is because any point at the equator is moving faster than a point further north or south in the Earth's rotation. Watch this video for a demonstration.

An arid land where no man ought go lest he fall prey to the beasts of the wild…Oh sorry. You wanted a definition? Deserts are one of the Earth's major habitats (or biomes), covering about a third of the planet's landmass. They receive less than ten inches of rainfall a year, but can be sandy, rocky, cold, or hot.

A geographic range of closely related organisms that is not continuous. If half of the species in a genus live in South America, and the other half live in Africa, then that genus has a disjunct distribution.

The process of moving spores, pollen, fruits, or seeds to colonize new places. The ancient Romans would be proud.

The horizontal belt that wraps around the Earth halfway between the North and South Poles. The equator is 0° latitude.

Common among a group of people

The evaporation of water from plants and the soil. This word is a combination of evaporation (from soil) and transpiration, which is just water loss from a living organism.

The southern part of the giant land mass that the continents formed 135 million years ago. Gondwana was made up of what is now South America, Africa, Australia, and Antarctica.

An area that is the natural home for an organism. Habitats are usually defined by climate but can also be defined by creatures that live there. For example, coral reefs are home to lots of fish, sponges, anemones, and other animals, but are defined by the coral (which is an animal, FYI) that creates them. Mangroves are trees but also define the swampy habitats they live in.

An air circulation pattern where warm air rises above the equator, loses its moisture as rain, then falls back down in the atmosphere at 30° latitude.

The northern part of the giant landmass that formed 135 million years ago. Laurasia was made up of what is now North America, Europe, and most of Asia.

Anything having to do with the ocean. A marine species lives in the ocean, but "aquatic" usually means freshwater.

The giant supercontinent made up of all of the continents. Pangaea existed about 250 million years ago, at the end of the Paleozoic era. We know from fossil evidence that the continents were once all joined together because the distributions of organisms only makes sense if the land was connected, like this map shows: 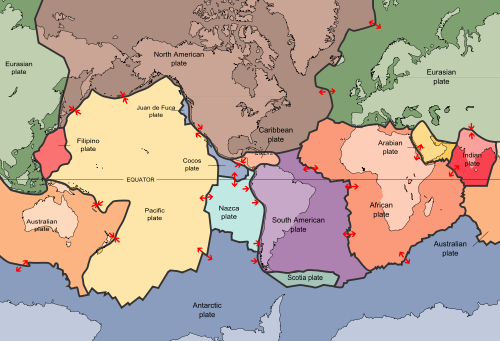 The open sea. The ocean is divided into zones based on depth and distance from shore. The pelagic zone is far from shore, which makes water clearer. This allows sunlight to penetrate deeper into the pelagic zone than the coastal zone. Not 20,000 leagues deep, but deep enough for a lot of plankton to be very happy.

he theory that Earth's crust is made up of distinct sections that move and run into each other. Plate tectonics explains why continents move through time, why earthquakes happen, and how mountain ranges form. Unfortunately, it does not explain Bigfoot. Plate tectonics builds on the idea of continental drift that was around for a long time, but was not accepted as a theory until the 1970s.

Earthly; having to do with earth or the land

We know what you're thinking. The tropics mean beaches, palm trees, and bikinis, not much else to know. Right? Not so fast. Although beaches, coconuts, and bikinis are great reasons to love the tropics, we're getting all formal-definition on you. The definition is not "somewhere south of the equator." The tropics is an area defined between the Tropic of Cancer at 23.5 degrees north of the equator and the Tropic of Capricorn at 23.5 degrees south of the equator. This area is called the tropics on any planet, not just Earth. Mars and Venus have tropics, too, they just don't have the same beaches and we're pretty sure there are no palm trees or bikinis there, either. 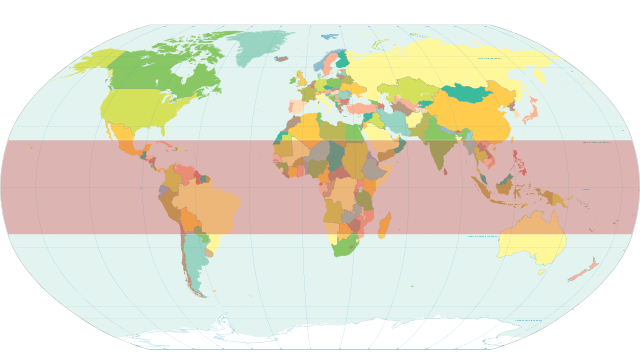 The tropics are highlighted in red on this map.

The division of an ancestral range due to a geographic barrier.

from klima = zone (G).Originally meaning a zone between two lines of latitude, climate later evolved into the term for atmospheric conditions of a region.

from desertum = something left, waste (L)

from gondavana = forest of Gond (S)

a combination of Asia and Laurentia, which refers to North America

radiate = to spread outward from a single point, from radius = ray, spoke (L)

from vicarius = substitute (L). This is the same root in the word vicarious, which your grandma might use to tell you she's living vicariously through you when you're out partying on the weekends and she's stuck playing bingo at the retirement home.
Previous Next
More on Biogeography Navigation