Cells - Structures Only in Plant (and Other) Cells

Structures Only in Plant (and Other) Cells

Structures Found Only in Plant (and Some Algae and Fungal) Cells

Now, we move on to the fun stuff that you only wish you had in your cells. It's okay to be jealous.

Like the cell walls in bacteria, fungi, algae, and some archaea, plant cell walls are found just outside the plasma membrane and provide the cells structure and protection.

The Cell Wall: Not Yours. You have experienced the presence of turgor pressure when you have broken a piece of crisp celery. In the same way, if you have ever tried to break a piece of wilted celery, you also know what effect the absence of turgor pressure can have on a plant. Plant cell walls also have small openings, called plasmodesmata, that allow cells to communicate with adjacent cells. Plant cell walls are composed primarily of a protein called cellulose, while fungal cell walls are made of a protein called chitin.

Most plant cells have a large membrane-bound sac called a vacuole. This vacuole can occupy between 30% and 80% of the total volume of the cell, making it the largest single cellular structure. The main function of the large central vacuole is to help the cell maintain water pressure—again, known as turgor pressure—on the cell wall. Water molecules flow into the central vacuole, and like a big balloon inside a cardboard box, it fills up and pushes outward on the cell wall.

Helpful tip: the word "vacuole" sounds a lot like vacant or vacuum, and this is a good way to think about this organelle. It mostly contains a water-based solution with some organic compounds and enzymes, but is otherwise empty. These organelles are responsible for converting the energy from the sun into chemical energy, usually in the form of glucose, through the elaborate process of photosynthesis. Chloroplasts are green because they contain large amounts of the green pigment chlorophyll bound to proteins embedded in internal stacks of membranes called thylakoids. Sunlight is captured by chlorophyll molecules and transferred throughout the thylakoid membranes to give off energy. This energy is used to strip carbon from carbon dioxide in the air to make sugar. Generally in any given plant, only some of the cells will contain chloroplasts.

Need a picture to sort this all out? We've got you covered: 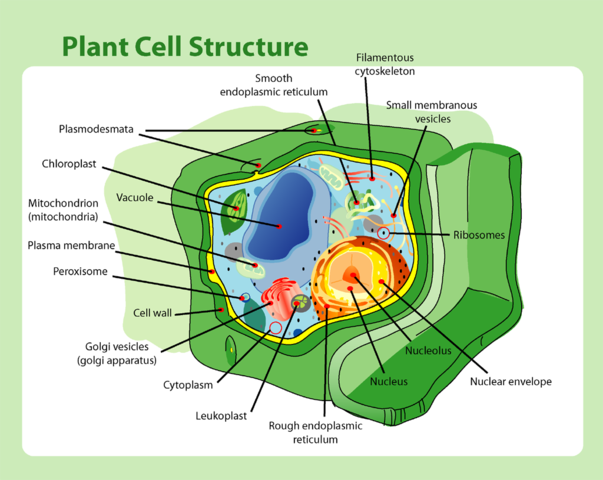 A plant cell structure in all its green glory (Source)

The chloroplast was also a free living bacterial cell once long ago, but its genome is much larger than that of a mitochondrion.