Biomolecules and the Chemistry of Life - Lipids

Lipids are an eclectic bunch of biomolecules. Yet, for all their differences, each and every lipid is hydrophobic, meaning it doesn't dissolve in water. That's because long stretches of lipid molecules only have carbons and hydrogens in them. Carbon and hydrogen share electrons equally, and both carbon-carbon bonds (C-C) and carbon-hydrogen bonds (C-H) are nonpolar / hydrophobic / water-phobic / well, you get the idea. Remember, water is a polar snob. Since the feeling is mutual, long stretches of nonpolar lipids will remain undissolved in water.

There are three kinds of lipids, and each one has a different function:

The first group of lipids includes fats, oils, and waxes. Slippery. They're made exclusively of carbon, hydrogen, and oxygen—or CHO if you're in a hurry. They do not usually roll into little rings, unlike the monosaccharides we talked about earlier.

The monomer for lipids is a fatty acid, or a long string of carbons and hydrogens with a carboxyl group at the end. A carboxyl group is a chemical group—everyone loves those—based around a central carbon that has four bonds (as carbon tends to do). Two of the bonds are stuck to one oxygen (C=O). The third bond is stuck to a hydroxyl group (C–OH), and the last bond forms with...some other atom. This atomic "friend" is usually called A or R, so it can remain anonymous.

Carboxyl groups are usually written as –COOH or –CO2H and are notorious for kicking out one of their hydrogens depending on the pH of a solution. This makes them carboxylic acids (they're back…) with the much cooler notation of –COO-.

Anyway, when three of these fatty acids come in contact with a molecule called glycerol (C3H8O3), dehydration synthesis (that old chum of ours) occurs and...bam! We now have a triglyceride. You didn't even see that coming, did you?

Fatty acids can be saturated or unsaturated. Remember, carbons are friendly; they can bind to up to four other atom friends. If every single carbon in a fatty acid is singly bound to four friends, whether they be carbons or hydrogens, then that fatty acid has totally maximized its bonding potential. Score. We say that it is saturated. No space for any more friends. Facebook page closed.

If, on the other hand, a carbon double bonds to another carbon, then it can only form single bonds with two other atom friends. Therefore, carbon now has only three friends in total. We call a fatty acid like this unsaturated, because carbon has not maximized its friending, erm, bonding potential. Notice that when two carbons form a double bond, it causes a little bend in the fatty acid chain. Serious relationships always have a few kinks, eh?

Take a look at carbon in its two different friending situations: unsaturated and saturated. (Psst. When there are zigzag lines with no atom in sight [/\/\/\], this means that carbon is the central atom, and hydrogens are "assumed" to be there. Yes, chemists are lazy.) What’s the difference between a fat and an oil? You might say, "Why the random questions, Shmoop?" Bear with us.

The difference between a fat and an oil basically comes down to the amount of unsaturation in the fatty acids. Saturated fatty acids form straight chains; therefore, triglycerides with saturated fatty acids can pack really close together. A bit like screaming tweens at a Miley Cyrus concert. These fats tend to be solid at room temperature.

When there are some unsaturated fatty acids thrown into the mix, the chains get all kinky and bent out of shape, and triglycerides can’t pack in as tightly. This looks more like the concert of a washed-up, one-hit wonder. Mmm…Vanilla Ice, anyone? Oils are the result of living in unsaturated fat country, like olive, canola, or sesame. Note that all of these are liquids at room temperature.

Fats and oils store a ton of energy. At 9.3 Calories per gram (capital C), they store over twice as much energy as carbs or proteins, both of which only yield about 4.1 Calories per gram. Per unit weight, fats are clearly a more efficient way to keep energy for long-term use.

Waxes are like fats in that they are solid at room temperature. This solidity is due to their high degree of saturation, but waxes tend to be used for functions other than energy storage, like waterproofing leaves and fur (baby seal time again!) or making floors shiny. 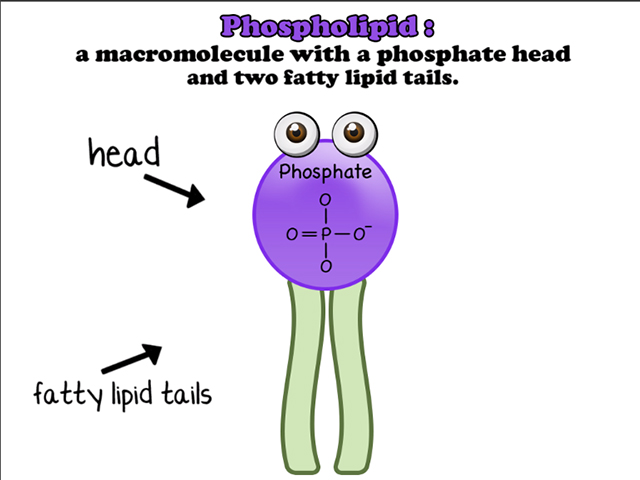 The second kind of lipid is a phospholipid. Similar to fats, oils, and waxes, phospholipids have a glycerol backbone, which is bound to fatty acids through dehydration synthesis. The only catch is that, this time, there are only two fatty acids instead of three. Sneaky, phospholipids, very sneaky.

The place that would otherwise be occupied by the third fatty acid is replaced by a phosphate group, which is written as –H2PO4R (give or take three hydrogens depending on the pH of the solution it's in). Hence the name "phospholipid." Biologists aren’t really that creative when it comes to naming things.

Time out: please meet phosphorus. He is an element with 15 protons, 15 electrons, and 16 neutrons. He loves to be a negatively charged ion and spends his days hanging out in a group called CHNOPS, or the six elements of life:

Basically, they're the Rat Pack of the elemental world.

The phosphate "head" of this big complex is polar, and you already know that fatty acids (or the "tails") are nonpolar. This creates quite the dual personality for the phospholipid. Does it hate water, or does it love it? Both! Cell membranes take advantage of these split tendencies by lining up two layers of phospholipids, with their nonpolar parts facing toward each other. The result is a barrier between the inside and outside of the cell. How convenient for a little blob of cellular machinery that needs some protection. This is called the phospholipid bilayer.

Here is the fascinating personality of the phospholipid exemplified, followed by the bilayer that cells and other biological structures take full advantage of. Remember, no atoms + zigzags means carbon is the central atom, and hydrogens are "assumed." Here are phospholipids in action. Phospholipid bilayers form the protective layer around cells. The last group of lipids is the steroids. You have probably heard a lot about these since Major League Baseball players seem to be incapable of keeping their mitts off them. But the steroids that are abused by athletes are only one kind. There are lots of steroids out there.

All steroids are composed of carbon rings stuck together by dehydration synthesis—four rings, to be exact. They may have various other chains of atoms hanging off one or more rings, but at heart, they all share the four carbon rings. Cholesterol is one kind of steroid, which you may have heard good and bad (but mostly bad) things about. Many hormones, including testosterone, estradiol, and stress hormones, are steroids, too. Who knew?

Because you are so curious, we've provided you with the typical steroid chemical structure. Again, no central atom means we're talking about carbon, and any hydrogens are "assumed" to be there. Your cell membranes are made of lipids, and some viruses hijack those lipids in order to hide from your immune system and invade other cells. One of these nasty viruses is HIV.