D3: Detection and Diagnosis of Disease

Imagine you have flu symptoms and decide to hit up the doctor. The doctor suspects you may have the H1N1 flu virus strain. There's a rapid test that the doctor performs and concludes that you do have H1N1. Then, PCR analysis can be performed on a sample to diagnosis the virus. Using the same procedures described earlier, primers have been designed for a specific H1N1 mRNA. Detection of H1N1 mRNA levels using PCR is more sensitive than a rapid test. This same technology can also be used to detect HIV, SARS, Dengue Virus, and mumps, just to name a few.

If the gene sequence that contributes to a genetic condition is known, it can be identified by PCR. Now that we know the sequence of the human genome, scientists have been able to link a particular disease to a gene or set of genes. Sickle cell anemia, cystic fibrosis and hemophilia are just a few conditions where the gene has been identified. PCR primers specific for these genes can be used to identify and amplify these genes.

While it sounds great and makes sense biologically, gene therapy has faced many obstacles. First of all, how do you get the gene into the cells? Usually, viral vectors are the vehicles of choice. In the example below, an adenovirus vector is used to deliver the correct or normal gene into the cell. 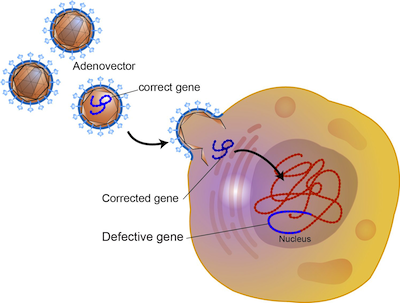 This method was used in trials in 2000 to treat ten children with severe combined immunodeficiency. David Vetter, otherwise known as the "Bubble Boy," had this condition. Nine children showed significant improvement, but three children later developed leukemia, which killed one child.

Some other issues with gene therapy still need to be hammered out. Currently, the effect is not long lasting. The correct gene needs to be incorporated into the genome so that its protein is continually being produced.

Gene therapy introduces something foreign into human cells. This can send a red flag to the immune system. The immune system has a great memory making it difficult to administer multiple treatments without an immune response.

The viral vectors used may also be problematic in targeting only certain cells, or they may be toxic. Finally, many diseases result from problems in several genes. Current gene therapies can only target single genes.

Knowing how the structure of the protein relates to its function allows scientists to don their lab coats and head into the lab to engineer similar proteins or small molecules. These can then be screened for desired effects.

Earlier we discussed gene cloning. This technique can be used to produce large amounts of protein. The gene coding for a protein of interest can be cloned into a cloning vector and transferred to a host organism such as bacteria. The vector is expressed, and boatloads of protein can be made. The insulin diabetics use to regulate their blood sugar is produced in this way.

Whole animals have been created that express a gene that's often from another species. These are called transgenic animals. They're also called genetically modified organisms, which we'll talk more about in a bit.

Transgenic goats and chickens have been produced this way. The protein product of the transgene is found in the milk and the egg, respectively. The proteins can then be isolated and purified. One example of this is goats that produce spider silk from their udders. No joke.

The first gene therapy drug from the Western hemisphere was recently approved for sale by the European Union. It is used to treat a condition called lipoprotein lipase deficiency and only costs, get this, $1.6 million per patient.

Previous Next
More on Biotechnology Navigation