Regardless of your chocolate preference, you belong to team Eukaryote. Well, at least 90% of you does. 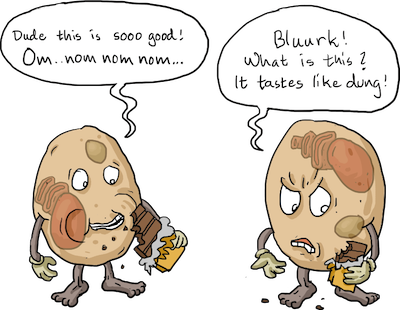 You're an organism chock full of eukaryotic cells, each containing a membrane-bound nucleus brimming with linear chromosomes and compacted chromatin structure. Your cells are more sophisticated…more evolved, if you will. The other guys, the non-you prokaryotes (such as bacteria) grow all over you, taking up 10% of your own body real estate. Prokaryotes have no membrane-bound nuclei to contain their DNA and no organelles. Without organelles, they are unable to separate cellular processes such as transcription and translation. Some of them live in fairly nice places, some of them live in extreme conditions you wouldn't be caught dead in, like coal mines, hot sulfur springs, and your armpits. So while they are nifty (or gross…your call) in their own way, they lack the higher order structures and organization of your eukaryotic cells.

In the following sections, we'll see what makes you and other eukaryotes so different from prokaryotes. We'll learn about eukaryotes involved in disease, and eukaryotes that are good to keep in the lab as model organisms. We'll also see the crazy diversity within eukaryotes themselves, a group that's made up of protists, plants, fungi, and animals. This group is so ridiculously diverse, that there are millions of species of multicellular eukaryotes on this planet, let alone single-celled eukaryotes that we'll also talk about.

Evolutionary biologists are trying to sketch a tree of life that would include all the eukaryote species in the world, but as of now, there's no piece of paper big enough to fit it. Imagine an evolutionary tree with millions and millions of species. It would look like some massive put-a-redwood-to-shame magic beanstalk of a tree. So…it's still under construction, and scientists are trying to draw one up using algorithms, matrices, and super computer technology.

Like we said—a magic beanstalk. Just for the record, beanstalks, magic or not, are also eukaryotes. Since we are all on team eukaryote, we suggest reading on. Consider it self-exploration.

10 Most Interesting Animals
Forget Barbra Walter's 10 Most Fascinating People this year. Check out the 10 most fascinating animals instead.

Life: A History Lesson
Check out a brief history of life on Earth, from the Big Bang to five seconds ago.

They Might Be Dragon Babies
Maybe dragons aren't real. If they were, though, they'd definitely be eukaryotes. Through this game, we can breed them anyway.

Life in Water
Nothing like classical music played to the tune of a Protist being a protist.

Zombie Ants
A zombie ant and a mushroom that stalks it. Because…why not?

Sponge Guide SquarePants
There's a lot we can learn from other eukaryotes. Including, how does one make a better fiber optic cable?

Glowing Cats
Could your kitty cat be the next model organism?

What Can You Do For Us, Protist?
Oh tiny protists, you may offer us so much! Find out the types of things researchers could use this mish-mash of a kingdom for here.

Next
More on Eukaryotes Navigation