A cell is the fundamental unit of all life, composing all living things. All cells are surrounded by a plasma membrane that sets their boundaries and keeps the bad guys out—or the cell keeps the bad guys in (depends on how you look at it). What separates the eukaryotes from the prokaryotes is that eukaryotes have more membranes inside their plasma membranes, which enclose other stuff inside like Russian nesting dolls. These smaller compartments are called organelles.

The main purpose of organelles is to allow different processes to take place in different areas of the cell. While all the proteins in a prokaryote seem to be able to share the same space just fine, it seems like in the process of evolution, some proteins and processes just didn't get along. A few time outs and a couple plasma membranes later, and we've got something that looks like this: 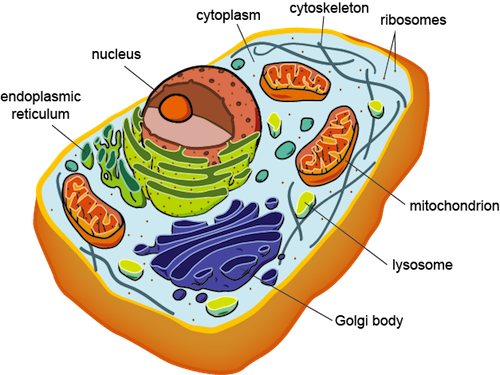 Example of a eukaryotic animal cell with all the fixins'.

Oh, we kid. That looks like a very well-behaved cell, doesn't it? Not at all like a toddler in her terrible twos. The truth is, these structures or organelles are exactly what allowed eukaryotes to go from single-celled organisms to complex and sometimes expensive multicellular organisms—like $100,000 truffles and the chefs that cook them.

Eukaryotes have lots of different organelles, such as a membrane-bound rough endoplasmic reticulum where proteins can be made and folded, and membrane-bound mitochondria where chemical energy is manufactured. This division of space and labor allows eukaryotic cells to be bigger and do more work in separate cubicles.

One of the only structures that both eukaryotes and prokaryotes share is the ribosome, which is the site of protein synthesis. Prokaryotic ribosomes are a slightly different, smaller size but the function has been conserved. Why change a good thing, right?

The membrane-bound nucleus is the hub of the eukaryotic cell, and it's chock full of DNA. Eukaryotes have TONS of DNA. All this DNA gives eukaryotic cells the opportunity to have more skillz. Some of that DNA encodes proteins, but some of it is transcribed into non-coding RNAs that dance around the cell to regulate processes just like a protein would. One human cell has 2-3 meters of DNA. Considering you can't see your cells without a microscope, fitting that much DNA into a cell, let alone a nucleus, sounds like Mission Impossible.

Never fear, your cells are as savvy as Tom Cruise. Actually, they're a lot savvier. Eukaryotes can have one to several linear chromosomes, or pieces of chromatin. Chromatin is just DNA packaged into a higher order structure by winding it around histone proteins like balls of yarn. One ball of yarn (histone proteins plus DNA) is referred to as a nucleosome. Presto. Tons of DNA fit into an itty bitty space. Pretty nifty, eh?

So…organelles didn't really result from proteins that didn't get along. They actually often work together, and sometimes they even fall in love. Awwww.