Mo' eukaryotes, mo' problems.
Oh, well. Evolution and time have brought us some fantastic eukaryotic diversity across the kingdoms. It's also brought us some "organism rivalry." Thanks to other eukaryotes, we have some interesting human diseases like malaria and burrowing worms. Eukaryotes can also have negative effects on the environment, as well as our pocketbooks. Here's a brief look at a few problems with eukaryotic interactions on the planet.

Sounds like the title of a great summer suspense thriller, doesn't it?

Most of these dinoflagellates are photosynthetic, meaning they contain pigments that help capture specific wavelengths of sunlight and turn that energy into food. These pigments come in a variety of colors, including (you guessed it) red.

Red tides actually have almost zero to do with the movement of water and tides. They do have something to do with red, though. You'd know why if you jumped in an airplane or hot air balloon and took a look at the sea from above. This explosion in dinoflagellate numbers causes the water to turn red and brown and murky. Of course, the pigments don't have to be red.

These dinoflagellates are normally present in oceans and seas, doing their own photosynthesizing thing and not bothering a soul, when peak environmental conditions cause them to grow out of whack. Sometimes this is an annual and natural phenomenon that comes with the seasons. Sometimes this is induced by human pollution switching up the nutrient content of the water so that it favors algal growth. Go us.

Some red tides or algal blooms don't harm a thing. Some do. It depends on the species of dinoflagellates that are growing totally out of control. For example, Karenia brevis in the Gulf of Mexico emits toxins that are disastrous to the environment. Red tides by this organism happen almost annually, resulting in fish death and shellfish poisoning. Since no one really wants to eat poisoned oysters, or swim in red water, the economy can also suffer big time. In fact, this particular red tide costs Florida nearly $20 million dollars per bloom in its tourism and fishing industries.

Never fear, science has found that another eukaryote might actually help stop this process. Science is cool like that. A species of diatoms, which ironically can also cause algal blooms (but not of the toxic or red tide variety), can decrease the growth of Karenia and reduce its toxic output. If scientists can figure out how this is achieved and use it to our benefit, we could decrease the algal blooms that hurt Mickey Mouse's homeland. 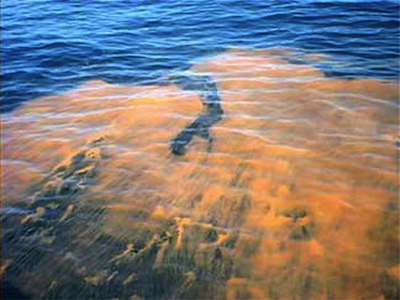 A red tide is also referred to as an algal bloom.

When you think of mildew, you probably think of this slimy moldy mess. Gross. You would be right. But we bet you didn't know mildews could come in different "flavors." You probably didn't know that because it's unpleasant to think of a mildew-flavored anything.

Mildews are eukaryotic pathogens that can infect plants. Many different types of plants are at risk, including flowering plants and agriculturally important plants such as potatoes and grapes. These are the plant-pathogenic flavors of mildew:

Downy mildews are eukaryotes too, but their classification is a little fuzzy. They used to be considered plants, then were re-classified as protists, and are now often referred to as their own kingdom of Chromalveolata. You say to-MAY-to, we say to-MAH-to. It's still the same organism that causes plants to get all slimy.

In times of high humidity, these mildews thrive. Powdery mildews on the leaves of plants make it look like someone just spilled a container of baby powder all over the thing. Downy mildews make leaves yellowish and brown, forming brown spores on plant leaves.

Mildew has been the cause of some large economic and cultural catastrophes. Potato blight that resulted in the famine of over one million people was due to a species of downy-mildew-causing Chromalveolata that destroyed potato plants all over Ireland in 1845. Later in the 1800s, French vineyards were hit by another downy-causing mildew that had disastrous effects on the wine-making industry and economy of the Mediterranean. 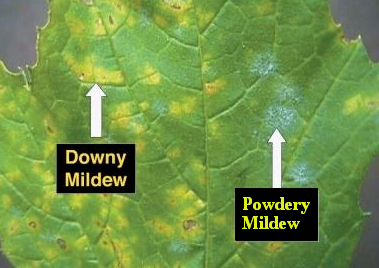 Mildew can also refer to the mold growth we might unfortunately find in the basement. These are different varieties than the ones that infect plants, but can be just as gross and toxic to us humans if it runs rampant.

Rust on plants can be caused by one of over 7000 species of fungi that infect plants. These mushrooms are from the order Puccinales, because they form these little rust-colored pustules on plants. Sounds gross, right? These pustules are actually the fungal spores, which are spread through the air and land on plant leaves, grabbing on by growing hyphae into the leaf and holding on like a leech.

These parasites suck the life out of plants, taking their resources and nutrients and causing slow growth and sometimes death. Many agriculturally important plants are susceptible to species of rust-causing fungi, making it a financially devastating problem.

Wheat is one type of plant susceptible to this eukaryotic invader. A few different species can cause wheat rust of brown, black, and yellow. Fungicides are chemicals used to treat and prevent these fungal infections that are currently in use on wheat crops. In addition, however, scientists are also breeding wheat crops that are genetically resistant to rust. 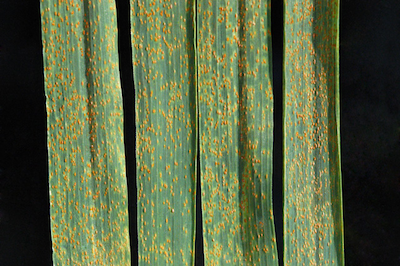 Rust on a wheat leaf.

Hide your soymilk and tofu. The soybean plant is another agriculturally important plant not safe from these fungal parasites. Fungicides, as well as genetically modified organisms, are prevention techniques currently being used to save your soy sauce. 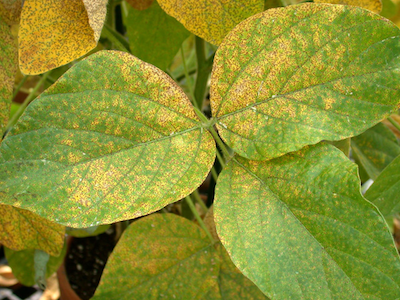 Rust on a soybean leaf.

Some dinoflagellates of the non-red-tide-environmentally-disastrous kind can produce a blue glowing light in the dark. Curious? It's possible to grow them.