Brace yourself. It's about to get eukaryotically crazy up in here. We're gearing up to run full speed ahead into the diversity of this domain. It's advised you take a minute to warm up those brain muscles with a couple right/left hemisphere sit-ups before we get started.

The Classification of Life

Before we jump into eukaryotic diversity, let's take a minute to appreciate the complexity of classifying biological organisms.

Eukaryotes represent a domain of life, but within this domain there are multiple kingdoms. The most common classification creates four kingdoms in this domain: Protista, Fungi, Plantae, and Animalia. These domains are further divided into a lot of smaller categories: phyla (singular: phylum), classes, orders, families, genera (singular: genus), and species.

You can imagine that even within one domain, there's a lot of different organisms that may not look or act much alike. They have to have some similarities in order to be grouped together, but they don't necessarily need to eat the same food, move the same way, or have the same taste in music in order to be part of the same kingdom. Organisms aren't generally classified by their reaction to Justin Bieber.

What aren't protists? They are neither fungi, animals, nor plants.

Now that we've cleared that up, here's a list of a few defining characteristics of protists:

1. Most are microscopic.
2. Most are single celled.
3. Some can perform photosynthesis, making them autotrophs.
4. Some are heterotrophs.
5. They can produce asexually (by themselves) or sexually (exchanging genetic material with partners).
6. Some of them can move by means of cilia, flagella, or pseudopodia.

You may be starting to wonder if this kingdom has more variety than a box of Jelly Belly beans. You would be correct. You may also now be craving a handful of toasted marshmallow and tutti-frutti treats.

Don't despair about the lack of absolute defining characteristics. Protists may look like the "leftover" group of organisms like Hufflepuff house at Hogwarts, but they do have something in common. They are a group of smaller organisms that are more complex than prokaryotes, but simpler than the rest of us.

A large group of protists include different types of plant-like algae that perform photosynthesis. As an autotroph, or organism capable of making its own food, they take sunlight and carbon dioxide and whip up some sugah-sugah for the rest of the world to munch on. Their small size and their ability to make food make them an important and essential beginning of many food chains.

Other well-known protist groups include more heterotrophic organisms that are more "animal-like." This group is referred to as Protozoa, and includes both the Plasmodium (which causes the human disease malaria) and the amoeba. Heterotrophs cannot cook their own food for the life of them. They resort to frozen food and the microwave.

But heterotrophs do survive by eating other stuff, like other organisms and organic matter.

It's on to the 'shrooms. When you think about mushrooms, you likely think of those red and white-capped Mario mushrooms, or a topping you put on pizza. The fungi kingdom represents those organisms, and over 70,000 other species of fungus.

Most fungi have the following characteristics:

1. Most are multicellular, but yeast are a unicellular exception.
2. Most are heterotrophs and many are saprophytes.
3. Their cells have cell walls made of chitin.
4. They can reproduce sexually or asexually through spores.

Since fungi are heterotrophs, they need to eat other things to survive. This is one of the things that distinguish them from plants, even though many plants and fungi are both immobile organisms stuck in the ground like a flagpole. (Sometimes fungi are stuck onto other things…like feet. Gross.) Some fungi are saprophytes. They can eat, or decompose, dead organic matter. For this reason, they are the trash compacters of the forest floor.

Many species of fungi get their nutrients through structures called hyphae. These are long root-like tubes that grow into whatever the fungus is attached to. They digest food outside of these hyphae, and then absorb it through the hyphae. This would be like you digesting your food on your plate, and then laying your head on it to allow it to seep through your skin like a crazy new rejuvenating trend. Maybe that would be more appealing to you if you were a fungus.

Some hyphae cells have distinct separations called septa—these are septate hyphae. The septa do not completely separate the hyphae cells. They are porous and allow things like nutrients and gossip to go through. Nonseptate hyphae do not have septa, and are instead a filament of fused cells forming one large mega-structure with tons of nuclei. 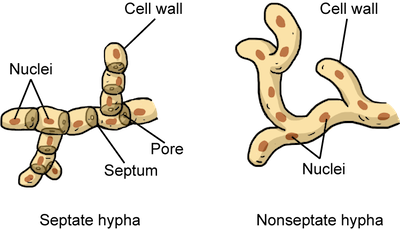 Hypha (plural: hyphae) are long filaments that fungi use to obtain nutrients. They can be septated or nonseptated.

Most fungal cell walls are composed of a polymer derivate of glucose called chitin. Remember that one, because it'll freakishly come back to us again in another kingdom like a boomerang.

The fungal life cycle differs from species to species. Fungi can reproduce by snapping off a piece of their hyphae, producing a bud, separating cells by a septa-like structure, or producing spores. Spores are these tiny little cells that can turn into a brand new mushroom, the cap-like reproductive structure that looks like a tiny parasol. Meanwhile, the fungal hyphae grow into the ground. The spores are produced by mitosis, so they are identical to its parent. Yes, many mushrooms literally clone a million mini-me's.

Most mating cycles are asexual, but in sexual reproduction, spores from two different organisms can fuse nuclei. These spores can then undergo meiosis to form four haploid cells with different genetic material, a mix of mom and pop. 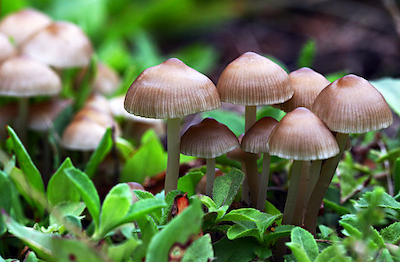 Baby mushrooms. So cute! Also, they are the perfect umbrellas for little fairies.
Image from here.

All right, now that we've upped your appreciation for mushrooms, go ahead and call in that pick-up order for your pizza with extra fungus before we get on to plants. Maybe you could make it a Veggie-Lover's to get in the mood for the next section. You might as well throw some meat on there too. The animal domain isn't too far away.

The third eukaryotic kingdom is Plantae. 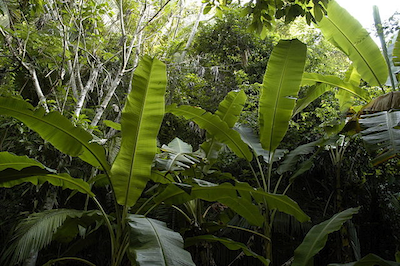 A jungle has no shortage of plant varieties for Tarzan to enjoy.

When it comes to plants, there's no stopping your imagination. Moss, ferns, trees, flowering plants, grass, etc. We eat them, we grow them on our windowsills, we sit under their shade, we walk on them, we weed them, and in some cases we even wear them down the catwalk.

Plants are further divided into different types. There are bryophytes (includes mosses), seedless vascular plants (includes ferns), gymnosperms (includes Christmas trees), and angiosperms (includes the dozen roses you forgot to buy on V-Day). The diversity of plants is further laid out for you here.

No matter the plant, here are some common characteristics:

It's not too hard to pick out a plant. The green color and growth in a fixed place is usually a good indicator. Plants are green due to a pigment called chlorophyll in their chloroplasts, the organelles that perform photosynthesis. Because they perform photosynthesis, all plants are autotrophs that make their own food.

This doesn't stop some of them from snacking on us. Okay, so that never really happens. But there are still some plants that enjoy the occasional beetle. Hey, we all have our weaknesses.

The cell walls of plants are largely made up of cellulose, a different sugar polymer than the chitin that makes up fungal cell walls. Cellulose is a compound that is strong like a bull. It gives plant cells, and therefore the entire plant, the strength to carry the weight of heavy branches, leaves, and 1,000 migrating birds. It also gives plants a defined, rigid shape.

Plant reproduction can also be a little variable, but they share the common feature of alternating generations. One generation is known as the sporophyte generation, and these family members produce a reproductive spore. These spores can create new plants in some species that are genetically identical to their parents, just like the fungal spores did.

However, the plant that arises out of a spore will be part of the gametophyte generation and usually doesn't look much like its parent at all. This plant will produce gametes through meiosis (eggs or sperm) that need to fuse with another gamete to produce the next plant. These gametophyte-producing organisms are tinier—like what you'd find if you cracked open a pinecone or looked under a fern.

It'll come as no surprise that this is also a pretty diverse kingdom. Still, there are a few things we can hold onto as common characteristics:

1. They are multicellular.
2. They are heterotrophs.
3. They do not have cell walls.
4. Embryonic development involves a blastula.

Of these distinguishing characteristics, the term blastula probably caught your eye as a newbie. After an egg and sperm combine, the new organism forms a blastula in early embryonic development (when making a bebe). A blastula is a sphere of cells with a fluid-filled, hollow middle region—like a chocolate-covered cherry without the cherry. All animals go through this blastula-stage, but no other organism does. 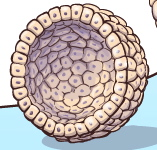 A cross section of a blastula is a hollow sphere of cells.

All animals evolved from one common ancestor, likely some sort of protist. The different types of animals and their phyla have been organized for you in this helpful little table.

In order to appreciate how these different phyla evolved from each other, let's pick out some key terms.

Most animals, except sponges, are organized into different tissues, or layers of specialized cells with a common function. The easiest way to think about this is your skin tissue, but different tissues also make up your own organs and muscles.

Some animals are all Jello-like, like jellyfish. However, some animals like insects and clams have a hard exoskeleton on the outside of their body to maintain their shape and keep them safe. Vertebrates like us, as well as sponges and echinoderms, have endoskeletons or internal skeletons that keep us "in shape" and lookin' good. Not all skeletons are alike, however, and skeletons can be comprised of specialized tissues, compounds, or proteins.

You may have noticed this talk of symmetry. If you could somehow divide a jellyfish into quarters and keep its tentacles from waving around, you'd notice it had symmetry around the middle of its umbrella-like top. This is called radial symmetry. Sponges lack this symmetry, or any symmetry. All other animals have bilateral symmetry, which means if you folded them in half like a sheet of paper, you'd get a perfect match. Usually.

The last thing we want to point out is the notochord, which is a rod-shape spanning the back all chordates. In some chordates, this notochord persists through adulthood. In organisms like us, this notochord eventually develops into the vertebrae. That's why we're the animals with a real backbone—and the guts to prove it. 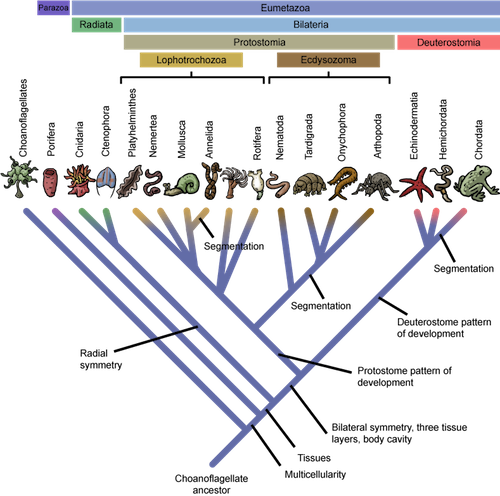 The phyla of Kingdom Animalia.

J. Haldane, an evolutionary biologist, once said, "God has an inordinate fondness for beetles." He was joking. Or was he? There are at least 400,000 different species of beetles on this Earth, let alone other insects. It's kinda creepy crawly. It's kinda ridiculous. It kinda makes you want to buy stock in beetle traps and bug spray. And, it's also kinda fascinating.