Earth is about 4.6 billion years old. It's eaten a lot of birthday cake over the years, but eukaryotes have only been invited to the party for about the last 2 billion years. How exactly did we get the first eukaryotic cells from those early prokaryotes back in Earth's "younger" days? Were eukaryotic cells just a part of Earth's midlife crisis? Or were they a way to liven up the birthday party?

Life started in the water, and so did the first eukaryotes. Plants were the first eukaryotes to "step" out of the sea and onto land, followed by animals, and then The Little Mermaid. It should be no surprise that insects were among the first animals to leave the water for the lush landscape, shelter, and food that plants provided on dry land. After all, insects are opportunists currently running amuck in our homes for the very same reasons. Blech.

To understand how eukaryotes most likely evolved, we need to take our knowledge of endocytosis and apply it to those prokaryotes living in way ancient times. The endosymbiotic theory explains how eukaryotes got their fill of membrane-bound organelles while evolving from prokaryotes.

Endosymbiosis is when one creature lives quite happily inside another creature and both creatures are the better for it. And a theory is an idea based on principles and evidence. But you already knew that, didn't you?

About 1.8 billion years ago, a hungry prokaryote went foraging for food. It came across a smaller prokaryote that looked like a tasty treat. Using endocytosis, the larger prokaryote dragged its dinner into the cytoplasm, where, for whatever reason, it wasn't digested like it usually would be. Instead, the little guy just set up shop.

This resulted in a larger prokaryote with a smaller prokaryote inside it. The little prokaryote retained its own membrane while also being surrounded by part of the host cell's plasma membrane. This double membrane is important. We'll come back to it in a moment.

Cyanobacteria, which still exist today, were the first organisms capable of photosynthesis—the process that converts energy from the sun into food. Cyanobacteria didn't just cook their own meals; they themselves became a food source for other cells to feast on.

During photosynthesis, cyanobacteria also produced the world's first primitive oxygen bar, changing the world's atmosphere into something that primitive eukaryotes could use for cellular respiration—the process that converts food into usable energy for non-photosynthesizing organisms (like us).

We know what happens to us when we're surrounded by greater food choices…like a room full of every flavor of birthday cake imaginable. We tend to eat more cake. We also might get a little bigger. Maybe we'll eat so much cake that we become cake. After all, you are what you eat, right? 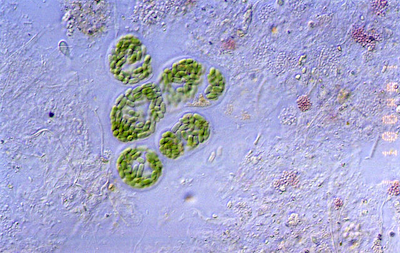 Unicellular cyanobacteria are the little green rod-shaped prokaryotes in this picture. Delicious looking, are they not?
Image from here.

Mitochondria came from tiny prokaryotes that got engulfed but then outsmarted the cellular digestion of their captor. Those early eukaryotes thought that was such a nifty trick that they'd do it again. Once upon a time, a larger prokaryote munched on a cyanobacterium by swallowing it whole, but since prokaryotes don't have mouths, it just wrapped its plasma membrane around the cyanobacterium, a process called phagocytosis, internalizing the smaller cyanobacterium inside itself.

Just like in the case with mitochondria, the cyanobacteria that rented a flat in the host cell maintained a double membrane and divided independently from the host cell. That's great, because soon a single host would have a bunch of tenants making food for the cell.

Over millions of years, these symbiotic cyanobacteria evolved into modern-day chloroplasts, which are capable of performing photosynthesis within a cell. This provides a food source for the eukaryotic cell (and for those of us that like a leafy green snack). The host cells now had a brand new shiny organelle and would continue to evolve into modernized, multicellular, photosynthesizing eukaryotes—like algae and palm trees and houseplants and spinach. Popeye is forever indebted to cyanobacteria.

Remember how we said that the double membrane in mitochondria and chloroplasts was important? What about it, then? Chloroplasts and mitochondria in today's eukaryotes have kept their second membranes that they picked up on the way into the cell, evidence that backs up the endosymbiotic theory.

Further, the transport of materials across the organelle membranes occurs just as it does across the plasma membrane. However, the membranes surrounding mitochondria and chloroplasts have different compositions, indicating that they originated from different places. There are other membrane-bound organelles in cells, but they don't all have this characteristic two-membrane feature. Therefore, it may not be that all organelles used to be other prokaryotes at one time.

Another piece of evidence that supports the endosymbiotic theory is that both mitochondria and chloroplasts have their own DNA, independent and different from the DNA in the nucleus. Ready to have your mind blown? The DNA in chloroplasts and mitochondria is circular, just like bacterial chromosomes.

In addition, mitochondria and chloroplasts have their own ribosomes. These ribosomes are smaller than those in the cytoplasm, and are very similar in size and structure to prokaryotic ribosomes.

Further still, mitochondria and chloroplasts replicate within a cell similar to the way bacteria replicate, through a process that resembles binary fission.

It's pretty cool to see all this evidence piling up to support the endosymbiotic theory. When life first got started on Earth during the Precambrian Era, there were just a bunch of simplified prokaryotes at the birthday bash, all without organelles. Eventually, some prokaryotes ate other prokaryotes, decided to allow them to live inside them, and then used them to become the first eukaryotes. These were mostly single-celled organisms resembling today's protists. A billion years later came the Cambrian Explosion, and boom! Here we are today. Now who wants some ice cream to go with all that birthday cake?

We thought you might need some tunes to help you remember all the details of the endosymbiotic theory.