Biogeography…break down the word, and it's the geography of biology, or the study of geographical distributions of organisms. Basically, where stuff lives. Before people became hip to evolutionary thought, people assumed a creator had made all the organisms on earth and had plunked them down somewhere. Where they lived and what they looked like didn't change.

From a biogeographical perspective, there's a problem with that reasoning…let's use a camel as an example. 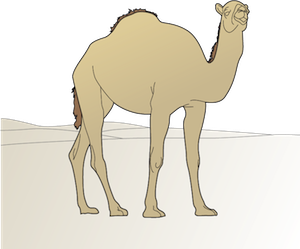 Why do camels always look so grumpy?

So sure, Mister Smarty-pants, you can find camels in other places now, but that's because people thought camels were awesome and moved them there. But what we're driving at is, if a creator made camels and camels love the desert, then why restrict them just to Asia?

Darwin was a big fan of biogeography, and spent quite a bit of time thinking and writing about it as he traveled the world. He didn't encounter any camels, but he did come to the same conclusion: the physical environment is clearly not the only factor determining where a given species lives; the same exact habitat on two different continents might have completely different kinds of organisms.

This observation, Darwin concluded, was further evidence that evolution was the honest to goodness truth. But what was his reasoning? As we said before, if a creator made all the living things on earth, you would expect to see them pop up in similar environments across the globe. But unfortunately for us, there are no camels in Arizona, no giraffes in Hawaii, and no chimpanzees in Florida, or at least none that made it there on their own steam.

If we accept that species evolve, then each species must have had a region of origin—a place where they evolved from an ancestor. From there, that species could spread out, stretch its legs, and start evolving. Then we would only expect to find them in the region they originated and the neighborhoods within walking distance.

Darwin also noticed that the species on one continent were usually more similar to each other than to organisms on other continents. For example, South America has some strange rodents. Take the capybara, which, at over 100 pounds, could probably squish a lot of dogs, not to mention toddlers.

In Canada in the 17th century, the Catholic Church declared that beavers are fish (swims like a fish, must be a fish) so that beaver meat could be eaten on Fridays during lent. Capybaras got their honorary fish membership a hundred years later in Venezuela.