In case you're not convinced yet that evolution really happens, we have one more piece of evidence in our back pocket. Evolution in action. That's right—for the real skeptics, we can actually witness evolution occurring right before our eyes, or, at least over a relatively short period of time.

Dogs are a great example of evolution in action; think about how many shapes, colors, and sizes of dog are out there. Snoopy. Lassie. Rin Tin Tin. Pluto. Goofy. Odie. Bolt. We could go on and on. All those dogs (if you can figure out Odie's breed) are members of the exact same species: Canis lupus familiaris. That is, all dogs, whether Chihuahua or Great Dane, are capable of interbreeding and producing fertile offspring—there may be some logistical complications involved here. This great diversity of dog breeds descended from gray wolves, and estimates from genetic data indicate that domestication of wolves may have started up to 130,000 years ago, even though archaeological evidence of dog domestication only goes back about 17,000 years. 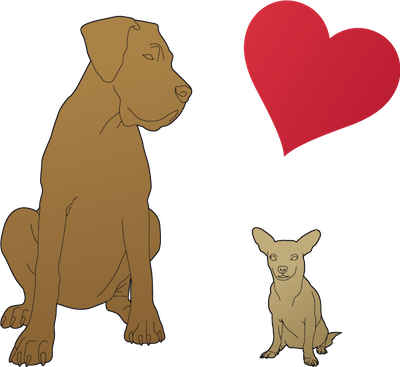 How did artificial selection produce the huge variety of dog breeds we see today? At some point in the not too distant past, some people were nuts about white, fluffy fur. They always picked the dogs with the lightest colored coats and the softest fur, and allowed those animals to breed with each other. After generations and generations of selection for those traits, we find ourselves with poodles. The same can be said about bulldogs, hounds, golden retrievers, and every other breed of dog.

Many of the traits that make dogs great pets were selected by the same processes. For example, dogs are affectionate, playful, loyal, and attentive to humans. Recent research suggests that dogs are better at reading human body language than wolves and chimpanzees. All these attributes and skills are probably due to selection for those traits by humans. In sum, by selecting desirable traits at each generation and allowing only dogs with those traits to reproduce, humans have effectively created all the breeds of dogs we're familiar with today, and have made dogs excellent companions. Hooray for man's (and woman's) best friend!

Artificial selection in dogs proceeded over thousands of years. Even though that might seem like a long time, it's a relatively small interval in the grand scheme of evolutionary time. We can see other, shorter-term examples of evolution, too. Consider the evolution of pesticide resistance in crops—when farmers douse their plants in chemicals to kill insect pests, pests quickly become resistant to those chemicals—sometimes in just a few years. The same can be said about bacteria and antibiotic resistance.

How the OS X cats evolved.