The early evolutionary thinkers didn't have cool molecular biology tools, like DNA sequencing, to help them sort out this big ole family tree of life. But thanks to a couple hundred years of technological advancements, we now have at our disposal the means to study the chemistry, structures, and processes that make all cells tick.

Ribosomes are another great example—cells from all three domains of life (Eukarya, Bacteria, and Archaea) possess these structures, which assemble proteins. Sure, ribosomes from an E. coli look a bit different than the ones in our knuckles, but still, there's enough similarities to make you go hmmmm.

Molecular biology can tell us all about the degrees of relatedness between different organisms. Kinda like six degrees of Kevin Bacon. Comparative genomics is a new field of study where scientists look at the genomes of different organisms side-by-side and see how they line up. And while we share a whole lot more genetic similarities with our fellow primates, we're still related to the lowly bacterium. Scientists estimate that we have as many as 200 genes in common with germs.8

Because some structures and processes are conserved across all organisms (which provides the evidence for shared ancestry a long time ago), scientists can figure out who is most closely related to whom by comparing genes across different organisms. Over millions of years of evolution, if similar DNA sequences still exist between two species (like a human and a chimpanzee) that can mean that the two organisms are closely related and diverged from a common ancestor relatively recently. Sequences that have a lot of differences, like between a human and a bacterium indicate that they split from each other a longer time ago.

For aficionados of gigantic Ice Age mammals, mammoths provide a cool example of how gene sequencing reveals information about the evolution of elephants and their relatives. In 2006 an international group of scientists sequenced genes from extinct wooly mammoths—like Jurassic Park, but with fur. Mammoths are often found in permafrost, (soil that's permanently frosty) and that provides ideal conditions for preserving DNA. 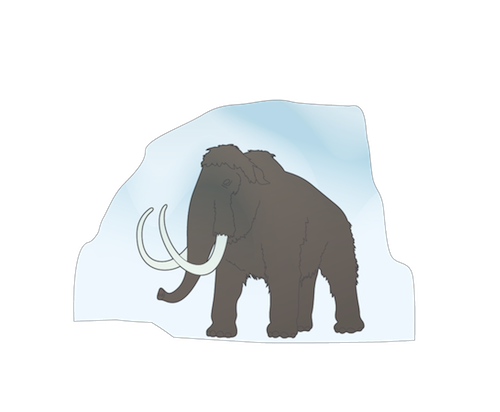 Why did the Woolly Mammoth cross the road? Because they didn't have chickens in the Ice Age.