There's also another factor that can affect what offspring you get to see, one that can make an allele behave in both a dominant and a recessive manner at the same time: lethality.

Some alleles are lethal when present in two copies; frequently the embryo won't develop at all or will die shortly after birth as a result of the problems caused by the faulty alleles. In this situation, the lethal allele is behaving recessively: you need both copies to get the effect (death). But if that allele is only present in one copy, then the organism survives and has a particular, recognizable phenotype; now the allele's behaving in a dominant fashion. Confusing, huh?

As you might predict, this also messes with your expected ratios. In a standard cross between two heterozygotes, you would expect the F1 phenotypic ratio to be 3:1, just as Mendel saw for his pea plants. But when dealing with lethal alleles, crossing two heterozygotes gives you a 2:1 ratio instead. 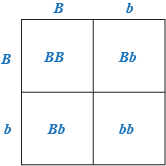 When you look at the example above, you can see where the 2:1 ratio comes from: of the four possible outcomes, only three are viable – two with the heterozygous phenotype and one with the homozygous viable phenotype.

There are exceptions to this recessive lethal behavior, although they're not very common. These are known as dominant lethal alleles, where having even one copy will lead to the death of the organism. Normally, dominant lethal alleles are quickly lost from a population because heterozygotes don't survive long enough to have children.

The most well known example of a dominant lethal allele disease in humans is Huntington's disease, a degenerative neurological disorder that usually doesn't start to show symptoms until after the age of 35. Although molecular genetics has greatly increased our understanding of the disease, there currently is no cure and people usually die within 15–20 years of their symptoms appearing.

Thereby hangs a tail -or not, as the case may be. Manx cats are famous for not having a tail. And the reason? A recessive lethal allele. As long as the cats have only one copy of this allele, all they lose is their tail!