As it turns out, Mendel was a lucky man. He picked, partly by accident, characters and corresponding alleles that showed simple relationships between dominance and recessiveness. Often, different alleles in a heterozygous state are capable of some degree of expression; one allele is not necessarily completely dominant over the other. Thus, a heterozygote genotype gives rise to a phenotype that is different from what each allele produces in the homozygous state. These alleles can be codominant or incompletely dominant.

To understand why this is the case, its necessary to look at ABO gene function. It may all sound a bit "Old MacDonald's Farm" with all these IAs and IOs, but bear with us on this one.

The IA allele codes for the production of "A antigens," IB for "B antigens," while IO doesn't produce any kind of antigen at all (the slacker).

This, by the way, is why people with AB blood type are universal receivers; they can receive blood transfusions from any blood group precisely because they produce no anti-blood group antibodies. On the other hand, people with O blood types are universal donors: anyone can receive their blood because it can't provoke an immune response, thanks to having no antigens on the surface of its blood cells.

It's tempting, however, to think it works just like paint—red paint mixed with some white paint produces pink paint. In fact, before Mendel's discoveries, many believed in such "blending inheritance": that the phenotype of an offspring resulted from the mixing of the parent's phenotypes, and so is usually in between their traits.

Back it up, though. Taking a closer look at flower color inheritance reveals it's actually consistent with Mendelian principles. If the pink F1 individuals (RW) are interbred to produce an F2 generation, 50% of the resulting plants have pink flowers (RW), 25% have red flowers (RR), and 25% have white flowers (WW). The F1 plants produced gametes carrying R and W in equal numbers that, when mixed up to produce new plants, generate the same genotypic ratios as with the traditional Mendelian traits.

Just like it was in the case of codominance, however, because the heterozygote produces a different phenotype than the homozygous dominant, the phenotypic ratios exactly match the genotypic ratios (which they don't do in a standard dominant/recessive relationship). 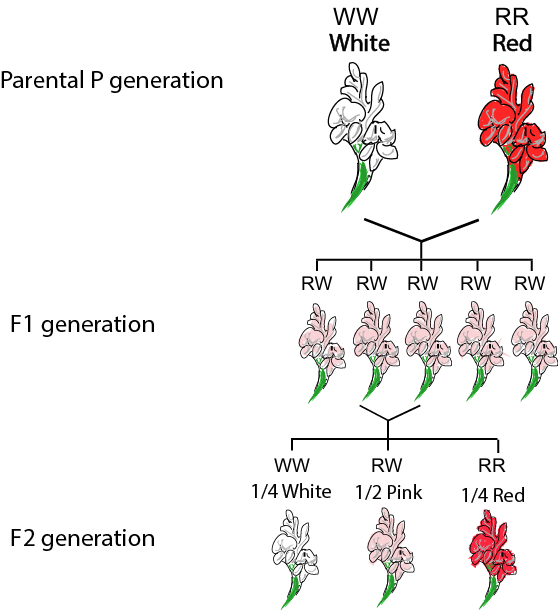 When does a potentially dangerous allele come in handy? Sickle cell disease (also known as sickle cell anemia) is a serious illness caused by a mutation in the gene for the hemoglobin β chain. The mutant allele, HbS, is codominant with the normal allele, HbA, and heterozygotes (HbAHbS) are said to have sickle cell trait, a relatively harmless condition that actually gives the affected person protection against malaria. We'll take living with sickle cell trait over dying with malaria.