Think Outside the Box: Extranuclear Genetics

DNA is not restricted to the nucleus: it's also found in two cytoplasmic organelles, the mitochondrion and the chloroplast . In most species, the DNA in both mitochondria and chloroplasts is circular, double stranded, and supercoiled. Both mitochondria and chloroplasts contain their own genome coding for the components of their ribosomes, the tRNAs used in organellar protein synthesis, and a few proteins specific to organelle function. Many other required proteins are nuclear-encoded and imported into the organelles. Generally the genome of these organelles is smaller than the nuclear genome – for example, in humans the mitochondrial DNA (mtDNA) contains close to 16, 000 base pairs or 37 genes, while the nuclear genome contains about 3.2 billion base pairs and an estimated 25,000 genes (US Department of Energy GenomePrograms, 2010)

The rules of inheritance for genes located in mitochondria and chloroplasts are different than for nuclear genes, and thus are often called non-Mendelian genes, because they don't follow Mendelian laws of inheritance. The results for reciprocal crosses are different. Extranuclear genes present uniparental inheritance – all progeny, regardless of sex, have the phenotype of one parent. In higher eukaryotes, most often it is the mother's phenotype that is expressed exclusively, a phenomenon called maternal inheritance. This is because the egg contributes much more cytoplasm (containing the mitochondria and or/chloroplasts) to the zygote than the sperm. It means your mitochondrial DNA is the same as all of your brothers and sisters, the same as your Mom, and your maternal Grandma, and great-great-great Grandma, all the way to back to "Eve." We are not talking about the biblical Eve, but the Mitochondrial Eve, a woman who is the most recent matrilineal common ancestor to all living humans (Sykes, 2001). It does not mean she was the first woman, or the only woman alive then. It simply means that if every person alive today traces their ancestry back through their mothers and thus their mitochondrial DNA, the Mitochondrial Eve would the first point on this network where everyone would meet. She probably lived around 200,000 years ago in Africa, supporting the theory that modern humans originated and migrated out of that continent.

Other, more recent, events can also be studied with the help of mitochondrial DNA. In Russia during the Bolshevik Revolution of 1917, Tsar Nicholas Romanov II, his wife Tsarina Alexandra and all of their children were executed. Rumors circulated, however, that one of the princesses, Anastasia, had survived. Years later, a woman claiming to be Anastasia appeared in Berlin and later moved to the United States using the name Ana Anderson. Until her death in 1984, she maintained that she was the surviving daughter of the fallen Tsar, but her claim could never be proven. However, in 1993, mtDNA analysis was performed on bones found in the recently discovered grave of the Tsar's family and in a living relative of Tsarina Alexandra, her grandnephew, Prince Phillip, Duke of Edinburgh (as Prince Philip's grandmother was Tsarina's Alexandra's sister, Prince Phillip, the Tsarina and all of her children share the same mtDNA). The results confirmed that the bones corresponded to Tsarina Alexandra and 3 of her 5 children. The same analysis proved that Ana Anderson could not be Anastasia, as her mtDNA did not match Prince Phillip's. 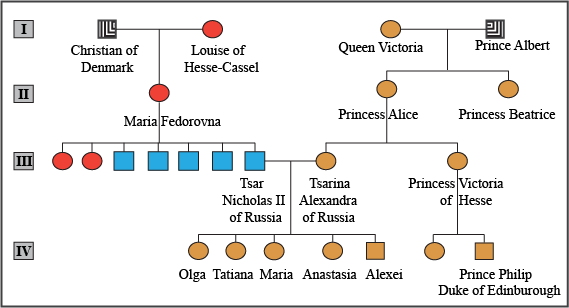 Did you know that scientists believe that both mitochondria and chloroplasts were once independent prokaryotic organisms that formed symbiotic relationships with simple eukaryotic cells? Their evidence: both organelles' DNA and ribosomes are very similar to those found in bacteria.