Genetics - Sex Determination and the Inheritance of Sex Linked Traits

Sex Determination and the Inheritance of Sex Linked Traits

In many organisms sex is determined genetically. Often this is accompanied by chromosomal differences between the sexes. Chromosomes, structures made of proteins and coiled DNA, contain all the genetic information of an organism. Two kinds of chromosome exist: the autosomes and the sex chromosomes. All individuals have two copies of each autosome, while the number and kinds of sex chromosomes varies between males and females. For example, in humans, there are 23 "pairs" of chromosomes: 22 autosomal pairs, and one "pair" of sex chromosomes. The autosomal pairs are simply numbered 1 through 22 according to their size (with chromosome 1 being the biggest, although chromosome 22 isn't actually the smallest – oops!), while the sex chromosomes are called X and Y. Females are determined by two identical sex chromosomes: their genotype is XX. Males, on the other hand, are determined by a single X in combination with the second kind of sex chromosome, a Y. Therefore, a male's genotype is XY. Not every organism with a genetic sex determination goes by the familiar X and Y system. In fact, sex determination systems across animals and plants are rather diverse, and the XY is present in only a small fraction of species.

In humans and many other mammals, the sex chromosomes are known as the X and Y chromosomes. Females have two X chromosomes, while males have an X and a Y. Because females carry two identical chromosomes, they are considered the homogametic sex, while males, carrying two different types of sex chromosome, are called the heterogametic sex. The Y chromosome is actually one of the smallest (in humans, the Y chromosome is about 6 million base pairs long – the smallest is about 5 million – although Y chromosomes can vary in size due to the presence of repeated DNA sequences), but contains the genetic information necessary to develop male characteristics. Boys will be boys (in part) because of their TDF (testis-determining factor). This gene or potentially closely linked group of genes, also called "sex determining region Y" (SRY) is located in the short arm of the Y chromosome. The default developmental program in mammals is femaleness; TDF activates the various developmental processes that generate male characteristics. So, guys, you should thank your TDF.

In many insects, as well as some bird and fish species, sex determination works opposite to the familiar system in mammals. Often this method is called ZW to differentiate it from the XY system discussed above. In this case, females have two different kinds of sex chromosomes (one Z, one W), while males have two copies of the same (ZZ). In some species, there is only one kind of chromosome, labeled Z. In this case, ZO determines a female (a single Z chromosome), while ZZ a male.

Here is a riddle for you: how can a male not have a father, and be unable to bear sons, yet at the same time have a grandfather and grandsons? Well, he just has to be a male Hymenopteran – a bee, for example. In a hive usually only one female, the queen, reproduces. She can control the sex ratio of her offspring by laying fertilized or unfertilized eggs: females develop from fertilized eggs and carry 2 copies of each chromosome (and thus are diploid), while males develop from unfertilized, haploid eggs (so they only have one copy of each chromosome). So all males have a mother (the queen), but no father. And they won't have any sons, because if they ever mate their sperm does not contribute to the eggs that will develop into males. However, their daughters will pass on some of their genetic material to their own sons when they reproduce (as long as those daughters turn out to be queens), so that any given male has a grandfather and can have grandsons! Good brain workout, right? 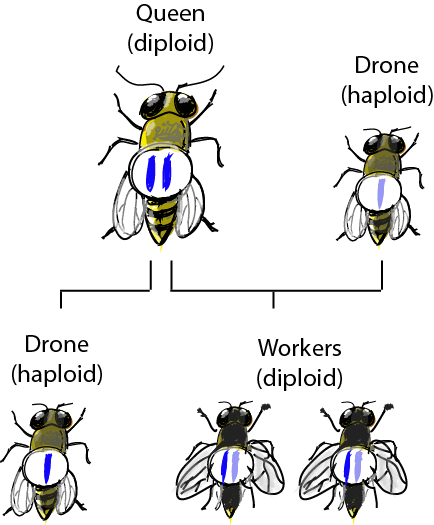 This single-gene-effect sex determination method is common in microorganisms. Two mating types exist: a plus (+) and a minus (-). These are genetically different, but do not produce any detectable morphological differences. Individuals bearing opposite mating types can fuse and exchange genetic material.

Genes that are located on the sex chromosomes follow slightly different rules to the genes located on the "regular" chromosomes, or autosomes. Let's consider any species with an XY sex determination system. Males are hemizygous for the X chromosome – they only have one copy, so they have only one copy of every gene on the X chromosome. Females, on the other hand, have two and thus can be homozygous or heterozygous for any locus on this chromosome. The result is a deviation from Mendelian ratios, as every X-linked gene is expressed in males as there is nothing to "mask" a recessive genotype, as there would be in females (remember, the Y chromosome itself contains very few genes that are mostly involved in determining male characteristics).

An interesting example of this is hemophilia in humans. This is a group of bleeding disorders in which the blood takes longer than usual to clot. The gene responsible for this disease resides on the X chromosome and is recessive. Hemophilia famously runs in some of the royal families in Europe descended from Queen Victoria (1819 – 1901), a carrier of the disease and presumably the individual where the mutation first arose (Aronova-Tiuntseva, 2003). Here are some of the patterns of inheritance of hemophilia that are a consequence of its association with the X chromosome. More men (1 in 10,000) than women are affected (1 in 100,000,000), as the disease is recessive in women but is always expressed in men, since men with that allele don't have another allele that might cover it up. No woman in the European royal families has been inflicted with hemophilia, but it has affected at least 10 of the descendants of Queen Victoria. It was, for instance, responsible for poor health of the last tsarevich of Russia, Alexei Nikolaevich Romanov (1904 – 1918).

The disease often skips a generation (as recessive diseases often do), and no hemophiliac man ever bears a hemophiliac son (if the mother carries two normal X chromosomes). Why? Well, only daughters inherit a man's X chromosome – a son always receives his father's Y chromosome (or else he wouldn't end up a son!). Assuming the mother carries 2 normal chromosomes, a hemophiliac's children won't suffer from the disease, but all daughters will be carriers (heterozygous for the hemophilia gene). Chances are then, that 50% of his male grandchildren born to his daughters (i.e. his grandsons) will suffer from the disease. Leopold was Queen Victoria's only son affected by hemophilia. His 3 children were unaffected, but grandson Rupert Cambridge (1907 – 1928), son of his only daughter, Princess Alice (1883 – 1981), inherited the disease. The only way for a woman to be affected by hemophilia is if both her father is a hemophiliac and her mother is a carrier (and thus she has a 50% chance of inheriting the disease), or if both parents are affected (in which case all children will inherit the disease).