Bacteria is one of the three domains (categories) of living things: Bacteria, Eukarya (this is the domain with plants, animals and fungi), and Archaea. The study of bacteria is called bacteriology (bac-teer-ee-ol-o-gee). All bacteria are prokaryotes(pro-care-ee-oats) which mean they are a single cell and have a simple cell layout without the specialized structures that plant, animal, and fungi cells have. Most bacteria are so small that a million of them could fit on the head of a pin.

Ironically, despite their microscopic size, most bacteria have really long names. For example: Actinobacillus actinomycetemcomitans and Thermodesulfobacterium hydrogeniphilum. Try to say that five times fast. Well, actually saying it one time slowly would still be an accomplishment. The capitalized first name is the genus of the bacteria, and the second non-capitalized name is the species. Bacteria names are usually written in italics.

Bacteria can be found almost everywhere on the planet. Because they are small and ubiquitous (this cool word is pronounced "you-bick-quit-us" and means "can be found everywhere") it is difficult to know how many undiscovered types there are. At least 4,500 species of bacteria have been identified, but some scientists estimate that there are millions of species living in untested locations all over the world. If you still think space is the only final frontier, then you must not own a microscope.

As mentioned in the previous section, you might not get an infectious disease every time you encounter a bacterium. The immune system kills most bacteria that enter your body. Other times, bacteria enter your body and don't cause any illness. However, for right now we are going to discuss those unfortunate times when you do get sick.

Notice the Streptococcus pyogenes in the upper respiratory section, or the bacteria that causes "Strep throat." How about Escherichia coli, or E-Coli, in the food poisoning section? How many other bacterial names can you recognize? 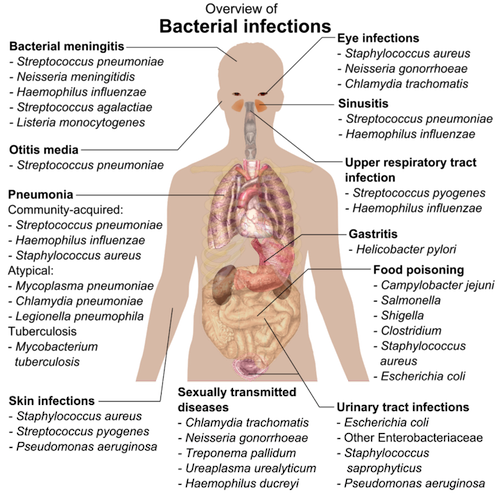 Common sites of infection for different types of bacteria.

Symptoms of a Bacterial Infection

The symptoms of a bacterial infection depend on the type of bacteria, how much bacteria started the infection, and the host that is being infected.

Bacteria often linger at the site of infection and the initial symptoms are usually in one body part. Some symptoms that are common in bacterial infections are:

In addition to these general symptoms, there are many different symptoms that can occur depending on which bacteria you have been invaded with and which area of your body has been infected. Some bacteria can release toxins that destroy immune cells, paralyze muscles, cause diarrhea, and many other unpleasant things. (WARNING: The following link it's not for the squeamish.) If you want to look at a really serious skin infection, click here.

The best way to stay safe from some bacterial infections is by getting a preventative vaccine. As discussed above, this will cause a militia of antibodies to assemble in your body. Then, if you get infected you will be prepared to destroy the invaders.

However, there are not vaccines available for many bacteria, and so many infections must be treated with antibacterials or antibiotics. These drugs can either be designed to target one type of bacteria or many types of bacteria. The drugs work by stopping cellular processes essential for bacterial survival, like building a cell wall. Remember, antibiotics are only for treating bacterial infections. They will not help you if you are infected with another type of pathogen, like a virus.

The first widely effective antibiotic, penicillin, gained notoriety in the 1940s. Other common antibiotics are amoxicillin, methicillin, vancomycin, and neomycin. Here is a longer list of antibiotics, and yes, most of them end with in.

Antibiotics can be taken as a pill, applied in an ointment, or even given intravenously in a hospital in serious cases. Many types of soaps and hand sanitizers have antibacterial components in them. The common use of antibacterials has caused concern amongst doctors and scientists because they can lead to drug resistance. Let's discuss how this can happen.

1) Assume that a population of billions of bacteria is treated with a drug and the drug kills almost all of the bacteria.

2) The bacteria that survived were lucky guys with a genetic mutation that made the drug ineffective on them. Think of the drug like a puzzle piece that needs to fit with the bacteria's shape. If the bacteria have a shape that is just a teensy little bit different, then the drug won't fit anymore and it won't work.

3) The bacteria that survived are naturally selected for and they keep replicating.

4) Pretty soon most of the bacteria are now the "new" puzzle piece shape and when the drug is used again it will barely kill any of them.

5) After several times of exposure to the drug almost all of the bacteria are now drug resistant.

To prevent resistance, doctors can treat them with different antibiotics to make sure all of the bacteria get killed. It is also important to stay clear of antibiotics unless they are absolutely-gotta-have-them necessary.

There are currently many types of drug-resistant bacteria. The most infamous of which is methicillin resistant Staphylococcus aureus or MRSA. Many strains of MRSA are resistant to four or more antibiotics. When a bacterium is resistant to many antibiotics it is called a superbug. Not super as in fantastic, but super as in uber-dangerous.

Group A Streptococcus (GAS) is a common cause of infectious disease around the world. GAS usually causes a non-invasive disease such as strep throat (sore throat, fever, pain when swallowing) or impetigo (a type of skin rash). Note: Beano has no effect on his type of GAS.

Sometimes, GAS can cause necrotizing fasciitis, or "flesh-eating bacteria." There are actually several different types of bacteria that can be "flesh-eating" (as shown in this video) including MRSA, which we will talk about next.

MRSA (sometimes pronounces Mer-suh) stands for Methicillin-resistant Staphylococcus Aureus. It is an infection by a strain of Staphylococcus (sometimes called staph for short) aureus that is resistant to a certain class of antibiotics, including some of the 'cillin favorites such as methicillin, penicillin, oxacillin, and amoxicillin.

Normally, you and Staphie there can hang out and not have any problems. Staph is present on your skin and nasal membranes and doesn't bother you any more than the other bazillion bacteria there. However, if these guys get into your body through an open wound, then they become a threat. Infection also occurs frequently on people with prosthetic devices or implants. This is because the bacteria like to grow together in clumps called biofilms which cover these devices like ants on a dropped lollipop.

The hot-button issue of MRSA got a lot of media attention in the last 10 years. As a result, the community has exercised more caution and cases have since decreased in the United States. 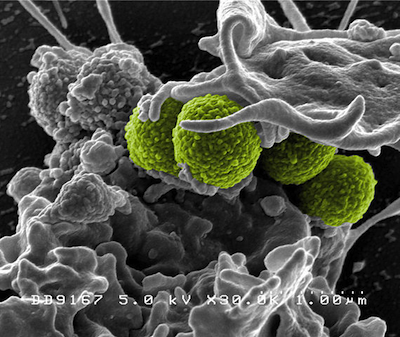 MRSA bacteria (in green) being engulfed by an immune cell.

Whooping cough (or pertussis) is caused by the bacterium Bordetella pertussis. It is extremely contagious and causes fever, runny nose, and cough. There is a vaccine for whooping cough which can be quite effective for children and adults. Yet, the CDC still estimates that there were 41,000 cases of whooping cough in 2012 in the United States. "Don't wait, vaccinate." In many countries vaccines are not easy to come by, and in 2008, the WHO estimated that 195,000 children died from whooping cough. 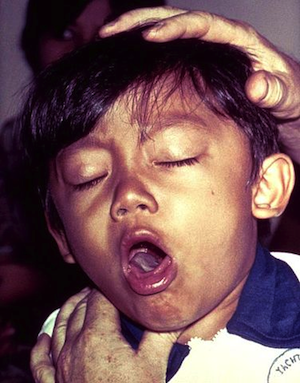 A boy suffering from whooping cough.

Cholera is caused by ingestion (through food or water) of the bacterium Vibrio cholera (shown in the picture below). Once inside your body, this evil bug releases a toxin which causes severe diarrhea. Apart from being unpleasant, diarrhea leads to deadly dehydration. Vaccines are available, but left untreated, cholera can kill a healthy adult within hours.

Although once a frequent problem, in the last hundred years it has been rare in industrialized nations. Sub-Saharan Africa and parts of Asia are an entirely different story since clean drinking water can be difficult to come by. The WHO estimates 3-5 million cases (the population of Chicago) and 100,000-120,000 deaths are caused by cholera annually, most of which go unreported. 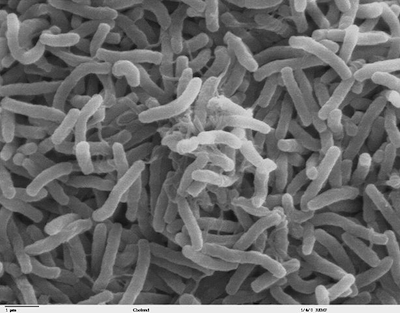 Leprosy has been described as early as 600 BCE. Those afflicted have often been ostracized from their communities due to the skin disfigurement caused by the disease. Leprosy is caused by infection by the bacterium Mycobacterium leprae. Because this bacteria takes so long to grow, symptoms may take up to 20 years to appear. Once detected, it can be treated with antibiotics. The WHO estimates ~200,000 people become infected with leprosy each year. 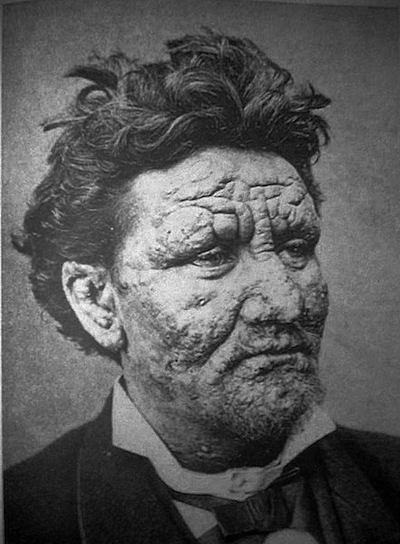 A 24 year old man suffering from leprosy in the 19th century.

Tuberculosis (TB) is the second deadliest infectious disease in the world today and is caused by infection with Mycobacterium tuberculosis. The only pathogen higher on the list of the "World's Least Wanted" is HIV/AIDS. TB is the deadliest bacterial infection on the planet (HIV is a virus) and according to the WHO it killed 1.4 million people and infected 8.3 million in 2011.

Evidence has been found that this bacterium has been infecting people for 9,000 years. In the late 1800s there was a movement to quarantine people suffering from TB (also known as consumption) into special hospitals (known as sanatoriums) that were constructed to house infected people. 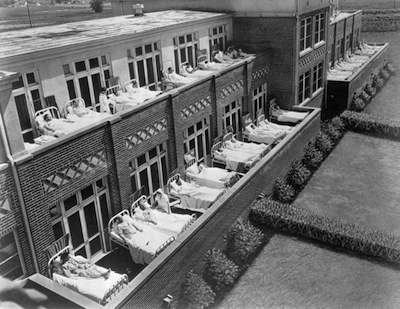 Patients lying in beds at a tuberculosis sanatorium in Colorado sometime between 1920-1940.

The quarantine was somewhat effective since TB is spread by an infected person coughing bacteria into the air which are then inhaled by another person. Don't forget to cover your cough. The main symptoms of TB are shown in the cartoon below.

The disease often has a latent phase where the infected person has no symptoms and it is not contagious. However, if symptoms do appear, only 33% of people will survive the disease without proper treatment.

The discovery of effective antibiotics in the 1940s greatly decreased the number of cases in industrialized countries although it is still a major problem in developing nations. Resistance to antibiotics has also caused a resurgence of cases. 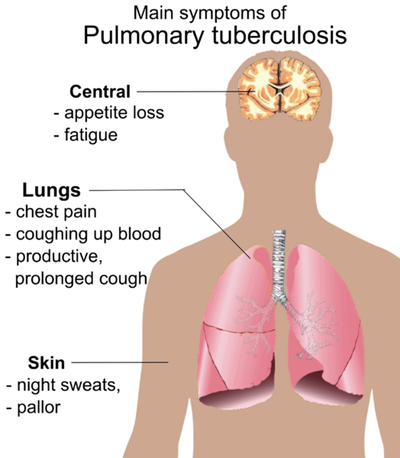 Common symptoms of a tuberculosis infection of the lungs.

Escherichia coli is a species of bacteria that is commonly found in the gut of many animals, including humans. Most strains are not harmful, but there are some pretty nasty strains, too. They can cause severe intestinal illness with bloody diarrhea, vomiting, and severe abdominal pain.

The CDC monitors outbreaks of dangerous E.Coli. In recent years both leafy greens and meats have been the source of contamination. This mutual enemy has the possibility of uniting vegetarians and carnivores for the first time. 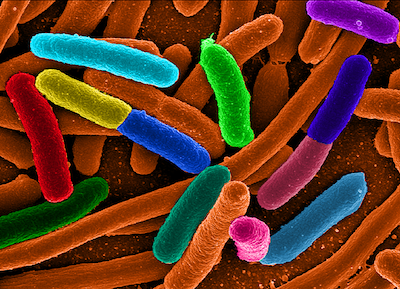 Not all bacteria are bad. In fact, the human gut is filled with helpful bacteria. In an average human walking down the street, there are approximately 10 times more bacterial cells than human body cells! Think about that for a few seconds. "Your" body consists of more bacterial cells than human cells. No worries though, your gut and the rest of your body are like apples and oranges.

Your intestinal tract is basically a tube that goes from your mouth all the way to your anus (See the pic below). This area is separated from the rest of your body which is why your immune system does not get activated. 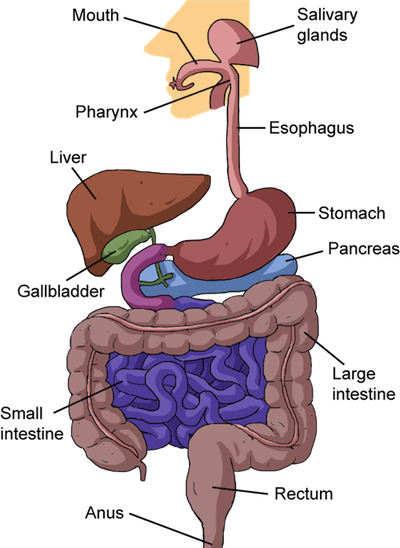 The population that lives there is called the gut flora. These bacteria colonize the intestinal tract at birth, and aid in many human biological processes. When you eat yogurt with "live cultures" it means you are eating some live bacteria to add to your gut flora population. Most scientists agree that an imbalance in gut flora could be contributing to many different diseases.

Did you know that there are still cases of bubonic plague in the United States? Look a little closer to the ground because Yersinia pestis, the bacteria that caused the Black Death is highly prevalent in the black-tailed prairie dog and the endangered black-footed ferret.