Helical capsids are usually formed from one protein that interlocks to form a helix-like structure around the viral genome. They are more common among viruses that infect plants, though influenza, measles, mumps, and rabies viruses all have helical capsid structures. These viruses are also negative single-strand RNA enveloped viruses.

Many animal viruses, as well as viruses that infect bacteria (bacteriophages), have an icosahedral structure. If you're not an obsessed Dungeons and Dragons fan, you should know that an icosahedron is a twenty-sided object that is almost spherical. If you don't have a friend who is a high elf wizard or a 3rd level elven raider, a traditional soccer ball also looks like an icosahedron. Icosahedral viruses are often formed by either one to three repeating subunits of capsid proteins. 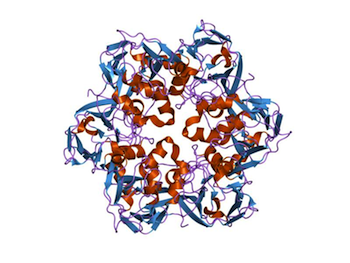 It's intriguing that most virus capsids are either icosahedral or helical in structure. Seems that these two structures are the ideal for viral genome protection and accessory proteins within a virus particle. And this makes sense, as we have proteins that wrap around a genome (helical), or proteins that form a sphere-like shell (icosahedron). Things go haywire when we talk about complex capsids, though, like the one seen above.

Complex capsids look sort of like virus spaceships. Fortunately no virus that infects humans has a complex capsid structure, or a spaceship. So, we're safe from the complex capsid virus overlords…for now. But, to be safe, you should take this time to choose which friend you'd eat first. Y'know, in case of an emergency.