For all the variety in viruses that we've talked about, viruses include other virus-like "organisms." We use the term "organism" very liberally because these are essentially just pieces of RNA or protein that can spread from one host to another in a virus-like manner. These include: 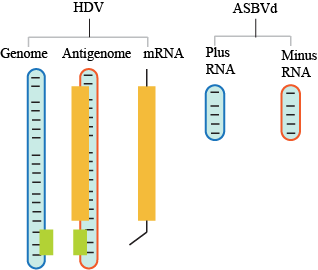 The differences between viroids and virusoids can be seen in the table below:

Hepatitis delta virus is a strange hybrid (like a werewolf-vampire baby, or a Chevy Volt), which has both virusoids and viroid properties. Its sequence is very similar to a viroid, though it requires a helper virus (hepatitis B virus), makes a protein (the δ antigen), and has a genome the size of a virusoid. Also, it is one of the few virus/virusoids that infect animals. So, it's cool and frightening at the same time.

If you thought hepatitis delta virus is scary, duck for cover because prions are a hundred times worse. Prions are infectious proteins behind transmissible spongiform encephalopathies such as "Mad Cow" disease and scrapie. Prions are proteins that spread from person to person and make the brain tissue sponge-like, and more appreciative of freeform jazz. What makes matters worse, is that unlike viruses and bacteria, which can easily be cleaned by ultraviolet radiation, bleach, or even ethanol treatment, prions are mostly resistant to all of these treatments!

Did we also mention that prions are normal proteins in our bodies? If you've not already pooped your pants, you can comfort yourself that they are fairly difficult to get. Unless you pooped your pants from our Taco Tuesdays, in which case the scariness of prions is not important.

Spread of prion disease is like the game "the blob" that you used to play as a kid. Or, if you didn't have any friends, it's the game that all the cool kids used to play while you looked on whistfully hoping that one day you'd be "cool."

Just like the "blob" game, once a PrPSc converts a normal prion protein, it joins this protein aggregate. Eventually, when the prion aggregate gets really big, it breaks off and converts other prion proteins to the scrapie form.

So, why are prion proteins so difficult to get? Well, they are primarily in brain tissue, and the best way to transfer scrapie prions is to eat scrapie-infected brains. "When would I eat somebody else's brain," you say? Well, Tijuana is a crazy place, and stranger things have happened.

A more real-world situation was the "Mad Cow" disease scares during the 90's and 2000's, which came from the practice of putting cow brains into cow feed. Kuru, another spongiform encephalopathy found in Pacific Islanders, originated from the practice of natives eating the brains of their deceased relatives. Flowers probably would be a nicer "less-brain-disease-causing" way of honoring your relatives, but we try not to judge.

If you're really scared of prion diseases, just try to avoid eating brains, or if you're throwing brains around, try not to catch one with your mouth. Also, try to avoid eating meat that may have been farmed intensively (i.e. animal brain is put into animal feed). Intensive farming has been frowned upon since the discovery of "Mad Cow" disease, and that practice has all but been abolished in Western countries. Phew.