TRIM5α is a host protein that binds to retrovirus capsid proteins and prevents uncoating and release of retrovirus RNA to make cDNA and enter the nucleus. The specific activity of the TRIM5α proteins basically determines what types of retroviruses we get infected with. Different species' versions of TRIM5α have different activity to block HIV, with the human TRIM5α not being able to block HIV, which leads to our susceptibility to HIV.

APOBEC3 is one of a group of proteins in humans (it is only one protein in mice) that changes cytosine nucleotides in RNA into thymines, simply by removing an amino group. This changes the sequence of the RNA genome so that C's are changed to T's and G's are changed to U's when reverse transcriptase completes making the double-stranded DNA genome. This leads to mutations that will stop protein synthesis early, preventing new virus proteins from getting made. The activity of APOBECs is exclusive to retroviruses because they can only target double-stranded RNA/DNA hybrids in the cytoplasm. 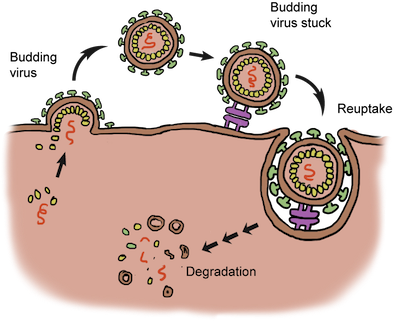 Unlike APOBEC3 and TRIM5α, which are mostly retrovirus-specific, tetherin is a restriction factor that broadly blocks virus spread. Tetherin, like its name implies, prevents enveloped viruses from budding out of a cell. Tetherin is a membrane protein that is incorporated in budding viruses and effectively "tethers" the virus to the plasma membrane, so it can't leave. These particles that can't escape are eventually taken back up and degraded by proteases.