Believe it or not, vaccines have been around for centuries. Vaccines are therapies that prime the immune system to handle a certain type of virus infection. Vaccination originated through the process of variolation, where individuals were given weakened strains of smallpox to protect against a full-blown smallpox infection. The name variolation comes from the fact that the small pox is called Variola, after the Latin varius meaning "pimple." 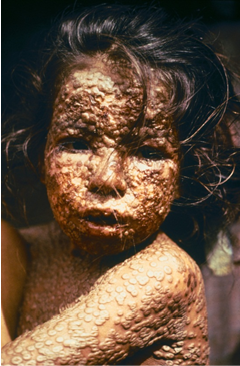 In the late 1700s, Edward Jenner replaced variolation with vaccination by infecting individuals with the cowpox virus, a virus similar to smallpox, but causes no fatalities in humans. Since then, through major political efforts, smallpox has been completely eradicated throughout the human population. 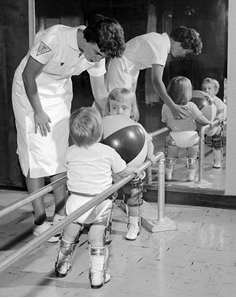 The next major vaccination breakthrough was Jonas Salk's development of the polio vaccine. Polio is a small RNA virus (Type IV from the Virus Genomes section) that causes infant paralysis. It was one of the most dreaded diseases of the 20th Century (next to Beatlemania), and was responsible for paralyzing former President Franklin Delano Roosevelt.

How does a vaccine work? The principle is that a weak disease-causing agent will activate the immune system and prepare it for a stronger version, provided that both the weak and strong versions share antigens that the immune system will target. The priming of the immune system with the weakened form of the disease agent occurs by generating a pool of active CTLs that are prepared to recognize a virus antigen. So, instead of starting from scratch, you already have a pool of anti-virus CTLs ready to stop the virus.

Vaccines come in many types, including

Edward Jenner's cowpox vaccine was what was called a "live attenuated" vaccine, which means that it is a live virus, but is weakened so it can't infect humans. In contrast, the Salk polio vaccine is a killed vaccine that has been fixed in formalin – the same chemical used to preserve cadavers. While the Salk polio vaccine was safe and effective, it was very inefficient to administer, requiring arm injections.

A vaccine that could be administered orally was later developed by Albert Sabin (Yay, Albert.). This vaccine was a live-attenuated version of polio. This was easier to administer, and led to the near-eradication of polio in the human population.

The third type of vaccine that targets viruses is the subunit vaccine. Virus proteins are administered to a patient, as opposed to whole virus particles. These virus "subunits" generate the same immunity that a whole virus would, without the possibility of getting sick from being infected with the virus. Examples of subunit vaccines include hepatitis B, human papillomavirus (the virus that causes cervical cancer), and influenza virus.

While the Sabin vaccine became the popular choice to eradicate polio, it was later discovered that some of the attenuated polio in the vaccine became full-strength polio, and led to recurrence of polio. Recent efforts to bring back the Salk vaccine to finish of the eradication process are underway.