Viral Escape from the Immune System

Why is the innate immune system not very good against virus infections? Because viruses are continuously evolving, so a general defense mechanism like innate immunity won't protect against an agent that has already evolved to avoid innate immunity protection. This is why adaptive immunity is so important, as it has co-evolved with virus infections in a host-virus arms race. It's like a Cold War between viruses and us, which always ends up with us getting colds.

There are a wide variety of ways that viruses specifically block the host immune system, including:

And different viruses make different proteins to do this, but usually these viruses have very large genomes. You have to have a large genome in order to pick up a virus gene that blocks a certain immune function. Think of it as viruses being boats and anti-immunity genes being anti-pirate guns. Small boats don't usually need anti-pirate guns as they can't afford it, nor do they have space to keep it on the boat. Large boats have plenty of room, and they have a lot more to lose if pirates attack them, so they'll pick up an anti-pirate gun, as they have the space and can afford it.

So, how do smaller viruses avoid the immune system? Viruses mutate so that the adaptive immune system can't remember virus antigens. There is a double-edged sword with these mutations. Viruses need to mutate to avoid immune recognition, but still need to keep the function of their genes. Think of it like buying a disguise to not be recognized, but you don't want a disguise that prevents you from moving.

When we talked about virus assembly, we compared it to a manufacturing plant. When viruses are getting made they have to have all the important ingredients, but there is no quality control in making viruses. That's why when you have a virus infected cell, for every newly made infectious virus particly, you have 50-100 particles that are missing one or more key parts for replication. These are called "defective" particles, as they cannot replicate.

So, viruses spontaneously mutate and evolve constantly, and they can do this because they have such a short replication cycle and produce so many offspring that it doesn't matter if 99% of them are non-functional. Virus polymerases are very error prone, because viruses don't really care about making mistakes. If you just make enough viruses, one of them is bound to succeed. It's like if you were taking a test, and you had to get 100 questions correct. Viruses don't take the approach of making sure every answer was correct. They'd just take 100 tests and at least get 1 question right per test. We don't recommend that strategy.

This high error rate allows them to escape immune detection more easily because the immune system is designed to target very specific sequences. And if a virus sequence has changed a little bit, the immune system just says, "That don't look foreign to me" and moves on, listening to country music in its pickup truck. 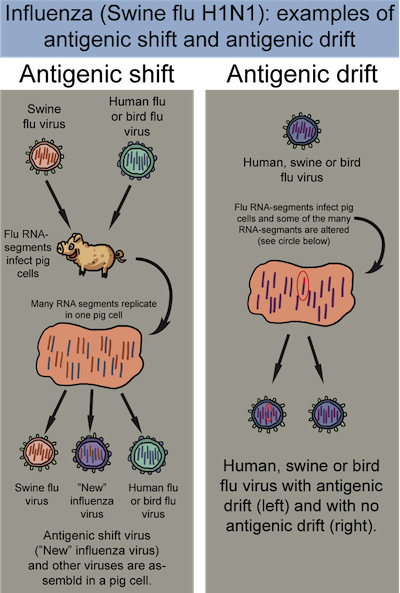 One example of virus evasion of the immune system is the process of antigenic shift and antigenic drift in influenza viruses. Influenza is a segmented RNA genome, and it can acquire nucleotide mutations like every other virus, because its polymerase makes mistakes all the time. This is called antigenic drift.

What makes influenza unique is the concept of antigenic shift. Because it has a segmented genome, if two different strains of influenza virus infect a cell, the daughter virus particles could pick up a gene from one strain, and another gene from another strain.