If the conditions are right for making viruses, virus proteins are made, but must be assembled into virus particles before being released in the cold, dark world. This is a process called "assembly," and you can think of it like "virus manufacturing." In the cell are all these virus "parts," and assembly is the process of putting the parts together. Virus parts include:

The "parts" described above are the minimum requirements for a functional virus. Virus assembly occurs through capsid proteins forming a scaffold for the virus genome to enter. The next step of virus replication (virus escape) depends on whether the virus has an envelope or not. 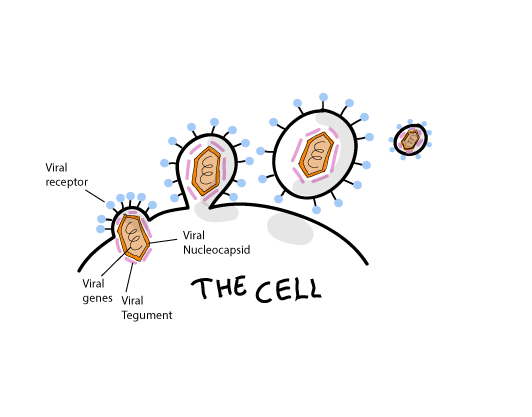 Naked virions usually just replicate themselves until there are so many that the cell explodes. This is called cell lysis, aka virus hulk mode. Enveloped viruses use a more elegant way to get out of the cell. They bud out of the cell in a process called membrane fission, which is the opposite of membrane fusion.

Just because a virus has escaped the wreckage it left in the cell after budding or lysis doesn't mean it's ready to infect another cell. Many viruses have to undergo a process called "maturation," meaning they read the New York Times more often. It's as if a virus leaves an infected cell as a young dumb teenager, and isn't ready to infect a new cell until it doesn't giggle every time it hears the word "poop."

[Editor's note: We at Shmoop would like to apologize for the last joke. The writer of that joke has been fired and is now writing jokes for Now and Later wrappers.]

Maturation is a process where proteases cleave the protein coat or membrane fusion glycoprotein of viruses that make it more capable of infecting a new cell. These proteases can be included in the virus particle (as happens with retroviruses), or can be found in the newly infected cell (as happens when reoviruses infect cells in low pH endosomes), or as the virus is being assembled in the previously infected cell (for certain influenza-like viruses). 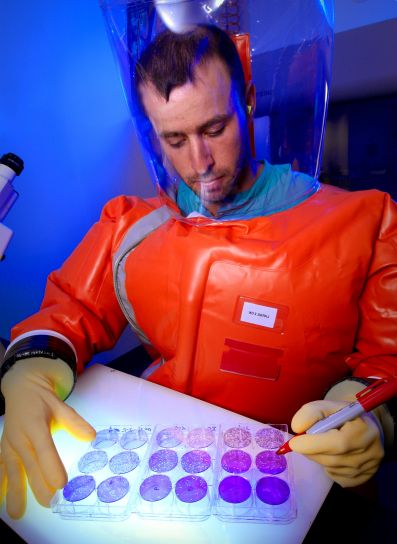 Once the virus has been so diluted that there are more cells on the dish than virus, each virus will infect one cell and kill the surrounding cells. This clearing out of killed cells on the dish is called a plaque. You can count the number of plaques, where each plaque represents an infectious plaque-forming unit (pfu). The number of plaque-forming units in a given infected sample tells us the amount of virus in the sample, or titer. A little bit of algebra later, and boom! We can figure out how packed with viruses our original sample was.

Here are some videos on virus replication for HIV and influenza. All for your viewing pleasure.