Inputs and Architecture of Photosynthesis

Organic molecules, aka hydrocarbons, contain hydrogen and carbon atoms. They're kind of a big deal because they sustain life on Earth. Animals—like us, by the way—that depend on taking in organic compounds from their environments are called heterotrophs. No organic compounds = bye-bye animals.

Organisms that do the photosynthesis dance (not like the safety dance) are called autotrophs, and without them, life on this planet would not exist in the way it does today. As in, we would have nothing to eat and no air to breathe.

Light Is the Driving Force behind Photosynthesis

Before we discuss light, let's first imagine kicking up waves in a pool of water. (Stick with us here: it'll make sense, we promise.) Waves form in a pool when you put energy into the water in the form of, say, a good swift kick. While it may seem like the water itself is moving, it is actually the energy that is moving as a wave.

This principle may seem backward, but it actually makes a lot of sense. Think of it in terms of the wave's frequency. If you were hanging out at the beach watching waves go by, you would only see a wave that had a long wavelength go by a few times. However, if the wave has a lot of energy, the distance between the waves would be smaller, and you would see a lot more waves go by in the same period. 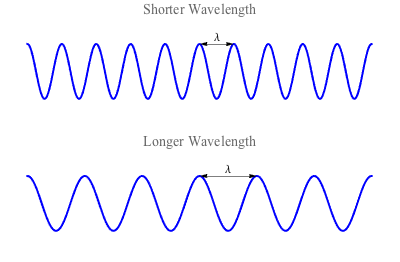 Wavelength is the distance between the peaks.

The human eye can detect wavelengths between 390 and 750 nm.

In photosynthesis, we're most concerned with visible light, which includes your classic ROYGBIV color scheme:

When all visible light is absorbed, we see the object as black. When all the light is reflected, we see white. White light can be broken into its individual colors using a prism. Voila! ROYGBIV.

Ummm…Weren't We Talking about Plants?

Back to photosynthesis. We see plant leaves as green. We bet you know why, too. That's right—plants absorb all wavelengths of visible light except green. Certain molecules, called pigments, have the ability to absorb specific wavelengths of light.

Chlorophylls are the pigments that make photosynthesis happen. There are several types of chlorophylls, and rather than giving them flashy names like Diana, Vince, and Una, scientists just named them a, b, and c. Chlorophyll a is the important one, as it is the molecule that’s found in all plants, algae, and photosynthetic cyanobacteria. Chlorophyll b is found in plants and algae (though in far smaller quantities compared to chlorophyll a), and chlorophyll c is only found in some species of kelp, diatoms, and dinoflagellates.

When a chlorophyll molecule absorbs light energy, its electrons are excited to a high-energy state—like, "just got the latest iPhone" excited. Just like for anyone, that energy boost to the chlorophyll is shocking, and all that energy needs to go somewhere. While we might use our newfound energy to study for a biology exam, the pigments (which don't need to study since they already know the steps of photosynthesis) let go of that energy in the form of heat or light.

Chloroplasts have an inner and outer membrane (remind you of anyone? Two membranes aren't just for mitochondria). And guess what's inside the inner membrane…yup, another membrane. Structures called thylakoids are bound together with a membrane like cute little macaroons. The French ones, not those weird coconut thingies.

The thylakoids are coated with chlorophyll molecules to collect sunlight for photosynthesis and float in a fluid called stroma, which contains all the necessary enzymes for converting carbon dioxide (CO2) into organic molecules. Like mitochondria, the chloroplasts are unique organelles because they contain their own DNA. This DNA encodes for many of the proteins used in photosynthesis, although the cell's nuclear DNA also encodes for some of the needed proteins, too. The chloroplast's DNA is excellent evidence for its evolutionary origin as a single-celled photosynthetic organism. To learn more, see our Big Themes section for details.

That's right, two important molecules with two even longer names. Don't worry about memorizing those tongue twisters, though. As long as you remember their abbreviations, that's good enough. The outputs from the light-dependent reactions are used in the light-independent reactions to fuel the production of carbohydrates.

Here's how the chloroplast keeps busy: 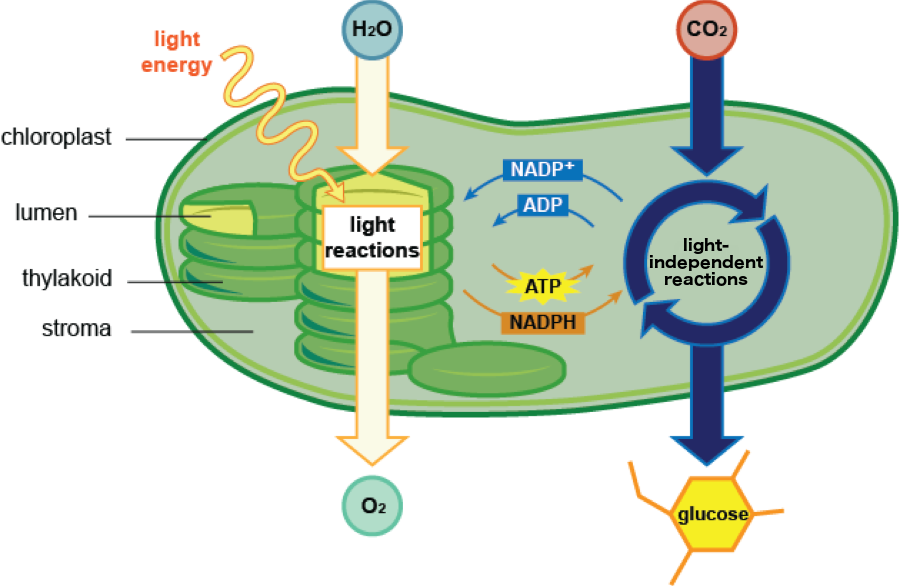 The light-dependent and light-independent reactions.

The applications of photosynthesis for our well-being were understood as early as a few hundred years ago. In 1779, Jan Ingen-Housz published Experiments Upon Vegetables, where he suggest that plants might be used to "purify" air for respiratory patients.1

Previous Next
More on Photosynthesis Navigation