After the evolution of seeds, the last big development in plant evolution was the arrival of flowers, which go hand in hand with the arrival of fruits. Angiosperms, or flowering plants, appeared on the scene around 140 million years ago (relatively recently in the grand scale of the Earth, which is 4.6 billion years old). A few plants started a new fashion trend by going where no plant had gone before: flashy colors and bold appendages. They developed two things that got them a lot of attention, and made them more popular than Justin Bieber, the cast of Glee, and The Hunger Games combined. These two new developments were:

Flowers: Brightly-colored flowers are great attention getters. Everyone loves flowers. Birthdays, Valentine's Day, Grandparents' Day…you can't go wrong with flowers. All kinds of animals love flowers, because they are bright, smell good, and usually have something sweet inside them. This sweet stuff is called nectar, and it is usually loaded with sugar, like Count Chocula cereal. 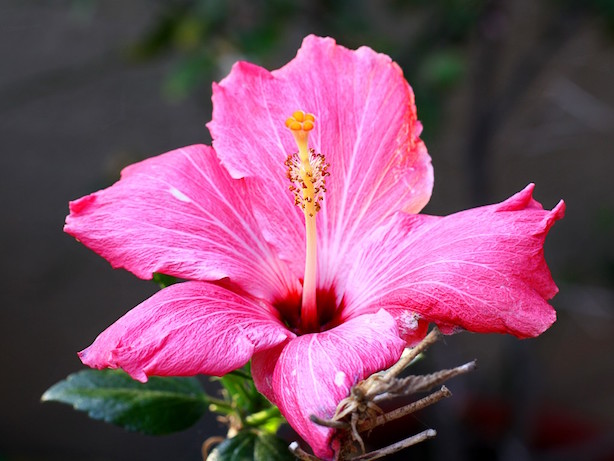 These three things (bright colors, good smells and sweet, sweet nectar) attract pollinators to the flower. Pollinators are animals that pick up pollen and move it from flower to flower. These animals are usually birds, bats, butterflies, moths, bees, and wasps.

Usually, flowers are set up so that an animal has to rub up against the pollen as it goes in for the nectar. The thing is, the animals are just after the nectar. They love nectar so much that they go from plant to plant looking for more nectar, and happen to spread pollen around in the process. This means the animal is an unwilling pawn in the chess game of plant reproduction. They do get the nectar reward though, so it isn't like the animals go home empty-handed.

Pollinators are more mobile than plants, since they have legs or wings, and they can transfer pollen very efficiently from one individual plant to another. This results in more successful reproduction and lots of seeds to make more plants. Animal-pollinated plants usually do not make as much pollen as wind-pollinated plants because animals transfer pollen so efficiently. Some animals only visit certain flowers. Often the flowers do things that attract one type of animal. For example, some orchid flowers look like female bees, which attracts male bees looking for a mate. Of course, the male bee is fooled when he arrives at the flower and there is no female bee, only orchid pollen. He does end up pollinating the flower though. When an animal visits only one type of plant, the pollinator is called a specialist. When a pollinator visits lots of different species, it is called a generalist. 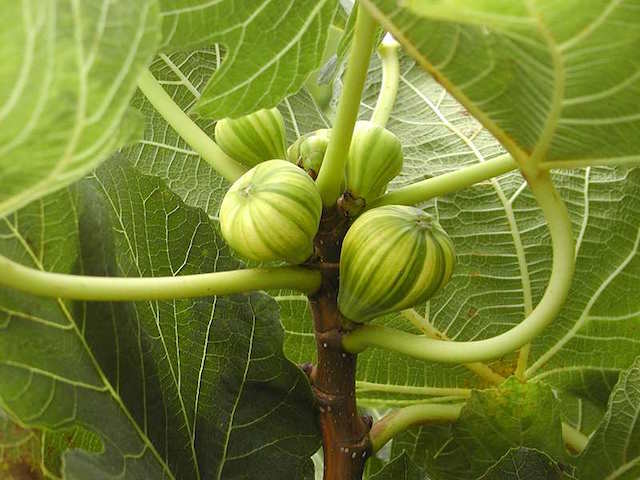 Fruits: Seeds in flowering plants get extra special treatment. We already know that having a seed in the first place protects the plant embryo. When that seed is surrounded by fruit, the seed gets even more protection. Better yet, the seed also has a way of getting around. Fruits attract animals that want to eat them—sometimes animals eat fruits but spit the seeds out (like humans do with watermelons) and other times, the seeds pass through the animal's digestive system unharmed and gets a free pass to travel to a new place while the animal moves around, then deposits the seed in whichever outdoor bathroom facility it chooses. The process of moving seeds around is called dispersal.

Inside the fruit, angiosperm seeds have a layer of tissue called endosperm. This layer is made up of starch, and when the seed decides it is time to wake up and smell the coffee, the endosperm gets converted to sugars. These sugars are a food supply for the embryo as it germinates. The endosperm is different from other tissue because it is triploid (3N), which means it has three copies of the genetic material. It is kind of like having three copies of the same dictionary—you don't need three to know what all the words mean, but no one wants to take the extras.

A. Cartoon showing the inside of a seed, with the endosperm and embryo labeled. B-D. Developing rice seeds at 2, 5 and 8 days after fertilization. 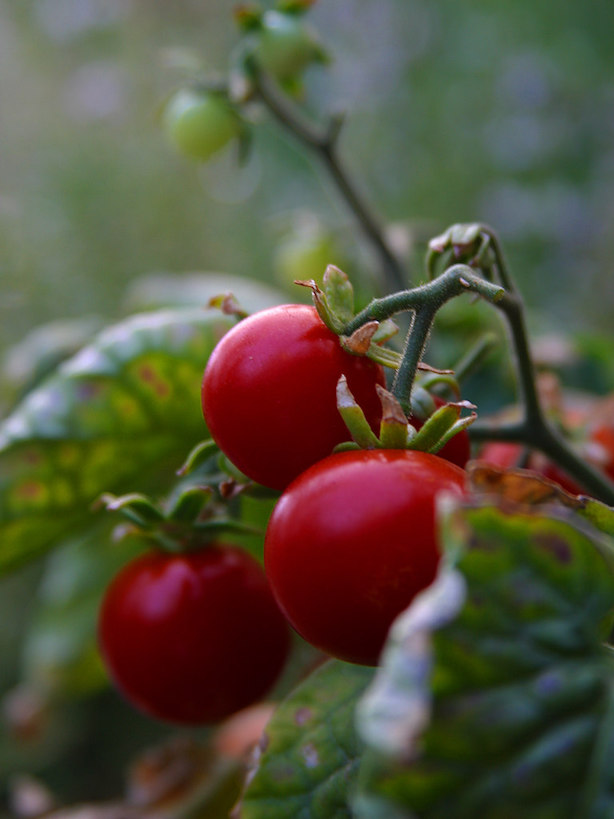 Tomatoes are fruits, even though we call them vegetables. In the plant world, there is no such thing as a vegetable. There is vegetative tissue, which is tissue that contributes to growth or structure but not reproduction. The truth is, most of the vegetables we eat are technically fruits because they are the reproductive structure carrying the plant's seeds. So next time Mom says to eat your vegetables, try telling her they don't exist.

In addition to flowers and fruits, angiosperms do a few more things differently than the gymnosperms and other plants:

--Tiny gametophytes: The gametophytes, which have been shrinking throughout evolutionary history, are even tinier in the angiosperms than they are in the gymnosperms. The male gametophyte is only three cells, and the female gametophyte is made up of only seven cells, one of which is an egg cell. The female gametophyte actually has eight nuclei, because one cell has two nuclei. This leads us to:
--Double fertilization: Flowering plants have a totally crazy phase to their reproductive process called double fertilization. If you think that sounds dirty, it is. Two sperm fertilize one ovary. That cell with two nuclei in the female gametophyte (see above) receives one of the sperm. This cell becomes triploid (3N), which means it has three sets of genetic material (one from the sperm and one from each of the two egg cells). This cell grows into the endosperm. The other sperm cell fertilizes the egg, and a diploid (2N) zygote forms.

Until the late 1990s, angiosperms were divided into two groups: monocots and dicots, a separation based on the number of seed leaves (cotyledons) a plant has. Theseseed leaves are the first leaves that open after germination, and are present within the seed). But after new technology allowed a better analysis of the DNA of these plants, taxonomists realized that there were not just two groups, but four separate evolutionary groups of angiosperms. The four groups are 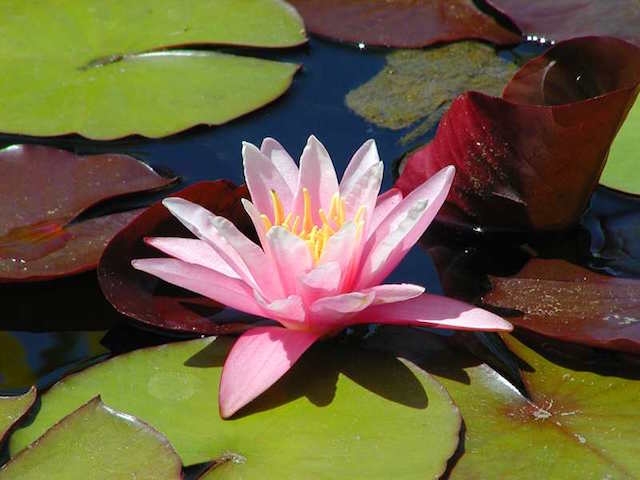 The Magnoliids (no, that's not a typo. It's pronounced mag-no-li-ids) are more closely related to monocots and eudicots than to basal angiosperms. Magnoliids have two cotyledons, so they were originally placed with the dicots. However, we know based on DNA studies that magnoliids are not the same as eudicots. Magnoliids you might be familiar with are magnolias and black pepper plants. Guess which one gave its name to the group? Hint: it's not the pepper. 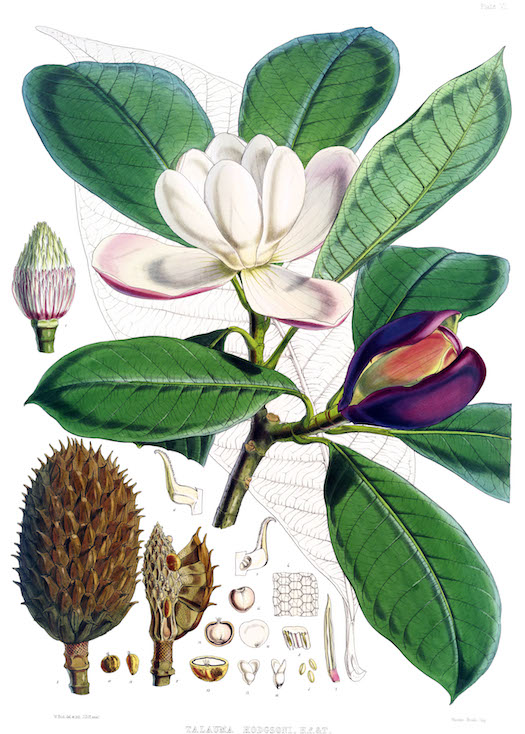 The monocots have one cotyledon, floral parts in multiples of three and parallel venation in their leaves. Parallel venation means that the veins run parallel to each other. Most of the important grains eaten in the world (corn, wheat and rice) are monocots. Orchids and lilies are other examples of monocots, but are definitely not as tasty. 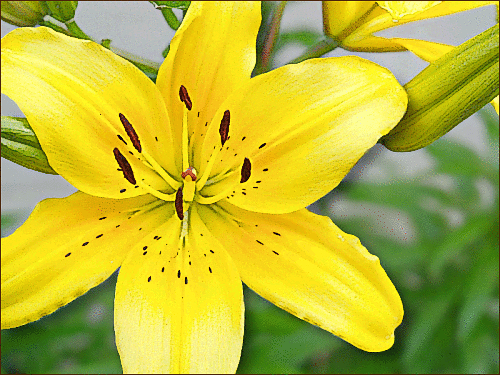 A lily has six petals and six anthers (floral parts in multiples of three). (Source)

The eudicots are the last group of angiosperms. They get their name because they are the "true" dicots ("eu" = true), now that those magnoliids got kicked out of the group. In contrast to monocots, eudicots have two cotyledons (those seed leaves again). They also have floral parts in multiples of four or five—they might have four, eight, or ten petals on one flower, for example. Another way to recognize a eudicot is that they have net venation in their leaves, so their veins look like a big web going every which way. Eudicots have deep roots compared to monocot roots, which are shallower and more fibrous.

Lots of plants are eudicots—they make up two-thirds of all angiosperms. Some examples include apple trees, roses, pea plants and tomatoes. 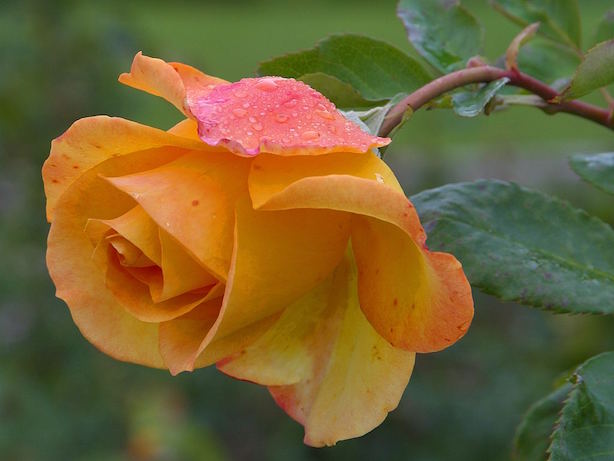 A rose plant. Don't bother counting the petals since the flower isn't completely open yet. (Source)