Prokaryotes have small genomes. The most studied prokaryote, Escherichia coli has a genome about 600 or 700 times smaller than a human genome.

It makes sense, though, when we think about how many different, specialized cell types humans make (kidney cells, macrophages, and neurons, for example). Human cells use their large genomes to specialize in LOTS of different ways. Single-celled prokaryotes also specialize, but each species has a small genome to work with and only specializes in a handful of ways. The amoeba—a type of single-celled eukaryote—has a genome 10 times as large as humans do, so this logic doesn’t always hold up. However, it is clear that bacteria are a lot simpler than eukaryotes.

Prokaryotes have adapted specific mechanisms that help them flourish in certain environments. Both bacteria and archaea can be found in extreme environments where other life forms cannot grow. For this reason they are called extremophiles.

One example of an extreme condition is high heat. Bacteria and archaea that preferentially grow in high heat conditions are called thermophiles. Thermophiles prefer temperatures above 45ºC (113ºF). Some thermophiles can even grow in boiling water. Most cells would not be able to function under these conditions because their cellular components break down in high temperatures.

Thermophiles must essentially stop their components from melting. These components include all the basic parts of the cell:

Can you guess which arrangement thermophiles have?

Thermophiles have more G/C pairs in their DNA than non-thermophiles do. Similarly, they make proteins with stronger intramolecular (within the protein) interactions and make their membranes from more rigid fats. Those might be hard to liposuction.

In the big swimming pool of life, each prokaryote, whether bacterium or archaea, has to make one important decision: Should I set out on a new course or stay put?

When prokaryotes decide to strike out for greener pastures, they make and use special structures called flagella. Flagella function like little flippers, but they look like whips. Here is a microscope image of stained, flagellum-riddled bacteria: 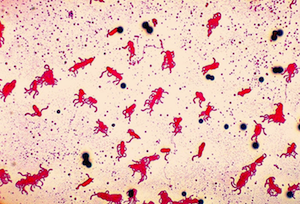 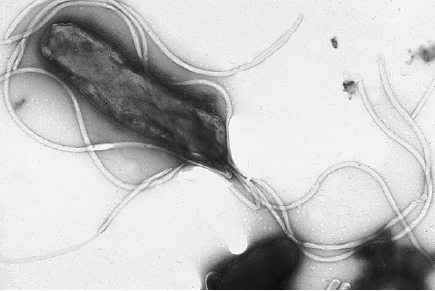 Bacteria can sense food as well as harmful chemicals in their environment. They can use their flagella to swim towards good things (food) and away from bad things (toxins). This behavior, motion guided by perception of chemicals, is called chemotaxis.

They say rolling stones gather no moss, but what if you like to eat moss? In some environments it’s best to stay put and let the food come to you. One such environment, from a bacterial view, is your intestine. Our intestines are full of bacteria that help digest our food.

In order to stay put and enjoy the bounty, rather than, err, slip out the other end, bacteria can stick to your intestines by using small appendages called pili (singular: pilus) or fimbriae (singular: fimbria). Pili help bacteria and archaea stick to various surfaces including rocks, plastic, glass, and your intestines. Pili are made up of units of a protein called pilin. 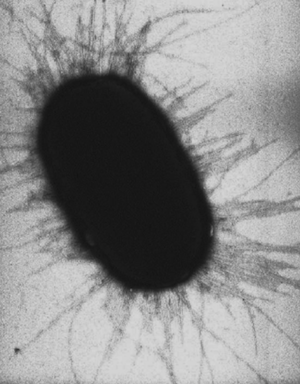 Pili also help bacteria stick to each other to form biofilms or exchange DNA in a process called conjugation.

Bacteria share DNA using a process called conjugation, which is also called mating or, simply, sex. Yes, bacteria are steamier than we thought and prove, once and for all, that size doesn’t matter.

DNA is always transferred in one direction, from the donor cell to the recipient cell.

The DNA transferred is usually a plasmid and often carries useful things like antibiotic resistance genes or genes that help the bacteria digest new food sources. Other times, the DNA being shared is neutral or harmful for the recipient.

Biofilms are groups of microorganisms held together by a sticky substance called extracellular polymeric substance (EPS). You know that film on your teeth in the morning? Biofilm. Yup. Gross. Want to go brush your teeth again? We’ll wait.

EPS is made up largely of polysaccharides (long sticky sugars). Polysaccharides are sticky like jam, syrup, or honey because they’re kind of made of the same thing. Since they are outside the cell they are called exopolysaccharides. Extracellular polymeric substance, exopolysaccharide, and EPS are used more or less interchangeably. EPS is also sometimes just called slime.

The first step of biofilm development is the attachment of a bacterium to a surface using pili. This cell grows and divides, producing more cells. Other cells from nearby join in as well. Biofilms are often made of a number of different species of bacterium.

Biofilms serve two functions. The first is protection. The coat of EPS protects the bacteria from predatory microbes, harmful chemicals, and from the immune systems of multicellular organisms (like us).

The graph below demonstrates the development of a biofilm. 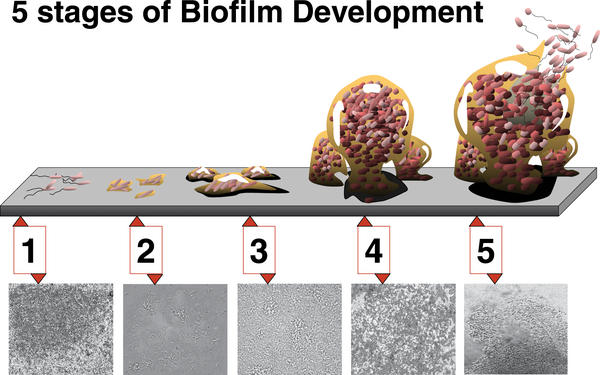 This graph shows a few planktonic cells landing on a surface in [1]. These cells start to produce EPS and you can see they look a little slimier in [2] and slimier still in [3]. This slime protects them and helps them stay stuck together. As the bacteria reproduce, though, they fill up the plate and need to grow out up and out in order to get access to oxygen and nutrients, and to get rid of waste products. The biofilm develops into a tower in [4]. By [5] the biofilm has developed enough that it begins to shed planktonic cells which swim off to find new places to live.

One way that some bacteria cope with downturns in their environment is to sporulate (make spores). Spores are similar to the seeds of plants, except seeds are multicellular and packed with nutrients, and spores are not. Mama plants just love their young more than bacteria do.

Sporulation starts out with asymmetrical cell division. During normal cell replication, cells divide symmetrically, producing two identical daughter cells. During sporulation however, one part of the dividing cell is notably smaller (about 1/5 of the starting cell). This smaller part of the cell is swallowed, or "engulfed", by the larger cell, and the two parts of the cell work together to ensure that the smaller cell component becomes the rigid, protected spore. The larger cell component dies. 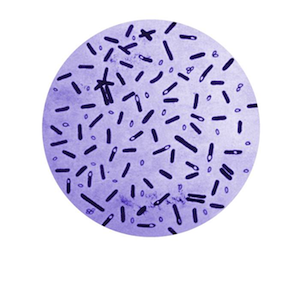 Spores are smaller than cells and look differently under a microscope because they are drastically pared-down cells, carrying very little protein. They are essentially fortresses for DNA and very little else.

Spores can survive high temperatures that sterilize other things. In the previous section we discussed how the theory of spontaneous germination was disproven. These experiments depended upon sterilizing liquid by heating it. It was seen that, in certain instances, this heating would not kill the bacteria. Scientist Ferdinand Cohn showed that these bacteria produced special heat-resistant spores.

Sporulation is a Gamble

Spores are dormant and cannot use the nutrients around them to grow. If a cell begins to sporulate, but conditions improve, other bacteria that didn’t sporulate will grow and take advantage of the situation while the spore effectively "sits this one out."

The upshot of sporulation is that if conditions are bad, every component of the cell is protected. Spores can outlast many extreme conditions and survive for millions of years.

Several kinds of bacteria, plants, and fungi make spores. So far, no one has identified any archaea that can sporulate.

Do you remember the movie (or book) Jurassic Park? The premise relies upon gathering dinosaur DNA that was preserved in amber. Of course, scientists have, so far, been unable to clone dinosaurs. Scientists in California, however, were able to find and revive bacterial spores (also from amber) that were between 25 and 40 million years old. Those are some old spores! They later used the same techniques to harvest yeast spores, single-celled eukaryotes, which they then used to make beer.