Prokaryotes - The Postulate and the Petri Dish

The Postulate and the Petri Dish

In 1890, Koch developed and published a set of rules, called Koch’s Postulates, that serve as a guideline for investigating the origins of infectious disease.

There are four postulates in all. We’ll detail them later, but they basically boil down to two central points:

That sounds like the scientific method, right? Well, it is!

In order to test if any organism is a pathogen you need to isolate it to separate it from other organisms. This might be easier to think of in the context of allergies.

Imagine you felt sick every time you ate pizza. The horror! You might be allergic to the wheat in the crust or the tomatoes in the sauce. Alternatively, you might be lactose intolerant and unable to digest the cheese. You would probably want to know which of these things was the problem, so you could adjust your habits.

Similarly, you would want to test a pure culture of a potentially pathogenic organism—rather than a mix of organisms—to determine which one causes the disease.

Isolating and Growing a Pure Culture

What’s a "pure culture" and how do you get it? It sounds like a magical dream place where unicorns frolic in fields of Cadbury Crème Eggs. What we mean here though is bacterial culture. A culture is a population of cells. A pure culture is a culture of only one kind of cells. So if you grow a test tube’s worth of one type of bacterium, that would be a pure culture.

In the pizza example above, it’s pretty simple to test your response to separate ingredients…tomato sauce, cheese, and crust…can all be separated and tested individually. If you’re investigating an infection, you can’t just go to the store and order different bacteria. Bacteria are not mozzarella. Separating bacteria takes slightly more effort.

Individual types of bacteria are isolated from other strains by growing them in petri dishes. Petri dishes, also known as petri plates or just "plates", are sterile plastic or glass plates with covers to prevent stray bacteria and fungi from contaminating them. They are filled with nutrients—called a growth medium (plural: media)—in a solid form.

Let’s say you want to separate the bacteria in John Snow’s well. You might take a swab of the well water and spread it on a petri dish and let the bacteria grow, as in the picture below.

After individual bacterial cells are spread on a plate, they take up the nutrients from the media. They grow, they reproduce and they have millions or more offspring. All in one night, the promiscuous little buggers. They make enough cells that we can see them by eye. Each spot where a bacterium landed and grew large enough to be visible is called a colony.

While each colony is usually dominated by one strain of bacteria, it may contain one or more other strains. If these other strains grow more slowly, we wouldn’t be able to see them yet. To make sure that you have a pure isolate, you need to separate the colony of bacteria into individual cells again. This is done using a technique called streaking. Keep your clothes on. We don’t mean that kind of streaking.

In order to streak bacteria, you need a few materials. First of all, you need some bacteria. We’re going to use the culture from the plate above. You then need a fresh petri dish and some sterile sticks to do the streaking. 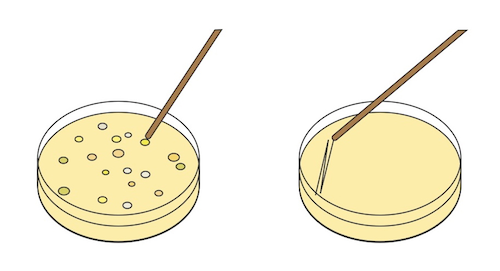 What you do now is brush one end of one of the stick against a colony on the first plate. Several cells from the colony will attach to the stick. Then rub the stick onto a sterile plate, as in the image below.

The first streak has lots of bacteria in it. Remember, we took these bacteria from a visible colony! The stick used in the first streak is discarded. Now take a second stick and rub it through the first streak. It will pick up a few bacteria, but not as many as if you touched a whole colony. Then rub the second stick on another path of the plate. Repeat this action with a third stick.

By following the techniques above, the bacteria are diluted in each streak. It’s kind of like if you drew a line with a pencil, and then rubbed your finger across it. Your finger (the second streak) carries a little bit of the lead with it, but a lot less than was in the first streak by the pencil.

This final plate is left to grow until you again get colonies of bacteria. This is an image of a plate that was streaked as above and left to grow. You can see that all of the bacteria on this plate are from the same strain. If you had a mix of different bacterial colors or consistencies on the plate, you’d want to retry the purification process. 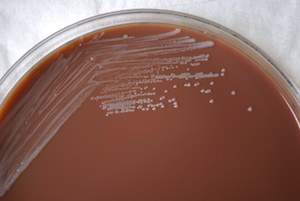 Streaking bacteria for single colonies diluted the bacteria enough on the plate. Now we can pick a colony that grew from one single bacterium. The final step for getting a pure culture is to transfer a colony of bacteria (again using a stick) into a test tube or flask containing a liquid growth medium. This is called inoculation. Growing in liquid allows us to get many more bacterial cells than we would get from a plate.

Now that we know all about pure cultures, the postulates for investigating disease origins are pretty straightforward. They are as follows:

The first postulate should be pretty clear. Say your friend Dana has a pet goat whose leg is infected with flesh-eating bacteria. You should be able to find some bacteria on the goat’s leg that you can’t find on other goats’ legs.

The second postulate states that "this microbe must be isolated and grown in pure culture". We discussed how and why we would do that above.

The third postulate is about testing the microbe’s pathogenic activity. If a healthy animal is inoculated with the pure culture—we use the word inoculate for test tubes and animals alike—it should show the symptoms of the disease.

The fourth postulate verifies that this specific agent is responsible and infectious.

Limitations of the Postulates

These postulates are also used for diseases caused by viruses and eukaryotic pathogens. They do, however, have some limitations. For example, some organisms are challenging to culture, especially intracellular parasites. Other diseases have variable symptoms. Finally, while the postulates can be tested on cattle and other animals, including primates, some diseases only affect humans. It’s usually not considered ethical to infect a human with a pathogen in order to fulfill the third and fourth postulates.

Agar, the ingredient that helps the media in petri dishes solidify, comes from seaweed. Seaweed and agar are common ingredients in a number of Asian cuisines.

The solidifying agent most commonly used in western cuisine is gelatin, which comes from pig bones. Excuse us, could you please pass the seaweed? Thank you.